Stephen Harper joined world leaders in setting a fossil fuel-free target for the year 2100 at the G7 summit in Germany last weekend but that target is a red herring, says a Vancouver prof. 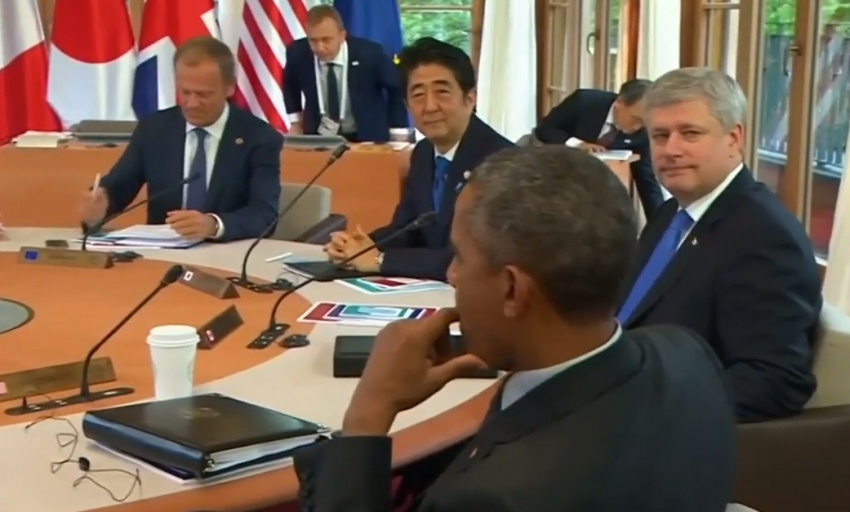 Prime Minister Stephen Harper at the G7 Summit table in Garmisch, Germany this past week. (Video still from CTV.ca)

In 2011 Canada withdrew from the Kyoto Accord. In 2013, it shut down the National Round Table on the Environment and the Economy (NRTEE). In 2014, Canada was accused of poor practices and delayed emission reduction policies by its federal Environment Commissioner.

For years, such events have stained the environmental legacy of Stephen Harper, who just last weekend pledged to go fossil fuel-free by 2100 with leaders at the Germany G7 summit. The commitment is internationally applauded, but some academics are taking the unusual step of questioning the merit of the prime minister’s pledge after years of failed go-green promises.

According to Mark Jaccard, a sustainable energy professor at Simon Fraser University, Harper has done nothing for clean energy so far and Canada's G7 target is a "trick."

“I think it would be great to be 100-per cent fossil fuel-free in 100 years," he told the Vancouver Observer Tuesday, "but it’s useless because we should be doing it way before then."

“If you get to that tiny level of emissions by the year 2050, it only takes you another decade to get to zero,” Jaccard said. “The more important thing though is that he hasn’t done anything to reach the 2050 target.”

Between 2005 and 2011, Canada managed to reduce its greenhouse gas emissions by only 4.8 per cent despite Harper’s promises in 2008 that the country would become a “clean energy superpower.”

As it stands, Canada’s provinces are paving the way to a greener future, adding pressure on the federal government to follow suit. In the last 10 years alone, Ontario has successfully phased out coal-fired power, and along with Quebec, implemented cap and trade agreement for all of its emissions. British Columbia has one of the cleanest power grids in North America, with a renewable electricity score of 93 per cent.

According to Merran Smith, director of Vancouver-based Clean Energy Canada, it means serious commitment from the federal government, which is renowned for reneging on climate change commitments.

“They’ve really gotten a cold shoulder over the last number of years and haven’t had this type of focused attention that we’ve given to many of our other major industrial sectors,” said Smith, who is also a fellow of SFU's Centre for Dialogue. She points to the federal aerospace program and the oil sands as primary examples.

“I think now is the time for Canadians to demand that their government… follow through on this commitment and hold their feet to the fire."

Easier said than done, said Jaccard, who believes the G7 summit pledge is a clever distraction from other botched climate change plans, including the nation's 2020 carbon reduction target.

According to a 2013 Environment Canada report, unless Canada takes new action, it will fail its five-year goal of reducing emissions to 17 per cent below 2006 levels by up to 30 per cent.

“I’m just telling you that the target is a red herring,” he said. “What you should be looking at is what policies Stephen Harper has in place for the target he already gave.”

Jaccard is not the only academic to criticize Harper's environmental track record however; in April, University of Alberta energy policy professor Andrew Leach named the PM as the sole "person to blame" for Canada's lack of greenhouse gas policy when it comes to the oil sands.

At a provincial level, academics have "lots to cheer about," said Jaccard. "It just ain’t Stephen Harper going to a G7 meeting and promising something for long after he’ll be dead, when there is stuff he could be doing right now and isn’t doing."

'Worst' of climate predictions are the most likely: new study