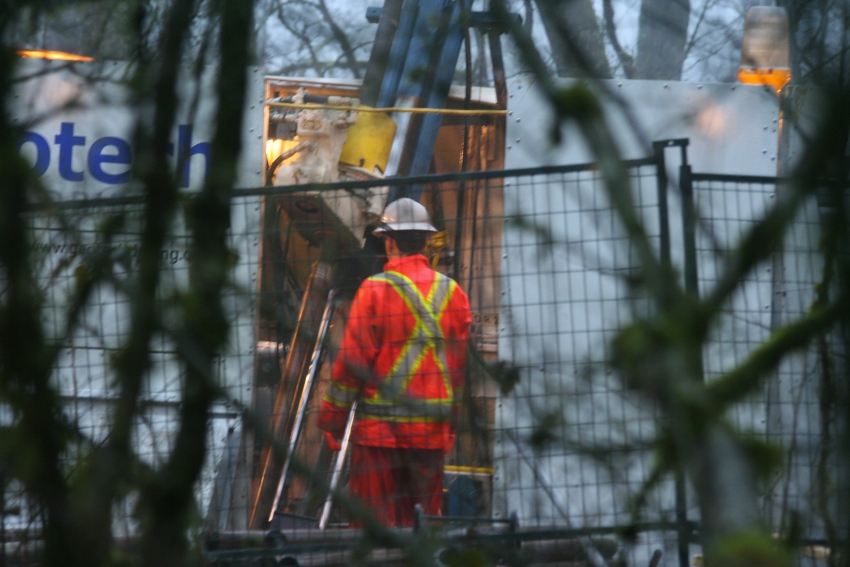 A Kinder Morgan worker operating the drill at borehole one, deep in the forest on Burnaby Mountain. All photos and videos by Peter Morelli.

They were always behind the police lines and often out of sight behind trees or trucks, but because of the drills, you could always hear them working. The Kinder Morgan crews operating on Burnaby Mountain were, and remain, something of a mystery. Isolated by design or by happenstance, they were largely unreachable, since getting anywhere near a drill meant risking arrest by crossing into an injunction zone or getting into the less risky but also legally uncertain police exclusion zones that bordered the sites formally under injunction by the court. When not at work within the injunction zones, the Kinder Morgan workers were usually under police escort, or changing shifts after dark and early in the morning.

Indeed, after the initial heated encounter between citizens and survey crews on October 28th, contact with the Kinder Morgan workers on Burnaby Mountain was relatively limited, and very seldom face to face. The little enclaves of orange vests and machinery at the centre of the protests remained largely undisturbed, seemingly unconcerned by the heavy police presence surrounding them at all times and the ire of the protesters. In some cases, especially at the upper drill site known as borehole two, Kinder Morgan workers had a clear view of arrestees being processed by police. For the most part, they observed the arrests without comment or simply ignored them altogether. Who were these workers, and what did they think of the protests that were calling for them to stop work and leave the mountain? Finding out proved much more difficult than anticipated.

Filmed on November 25th, this clip captures the work being done at the upper Kinder Morgan drill site on Burnaby Mountain known as borehole two. Almost as soon as I began to take photographs and film the workers, a Kinder Morgan employee — seemingly charged with site security — wandered over and started filming me right back with a go-pro chest camera. 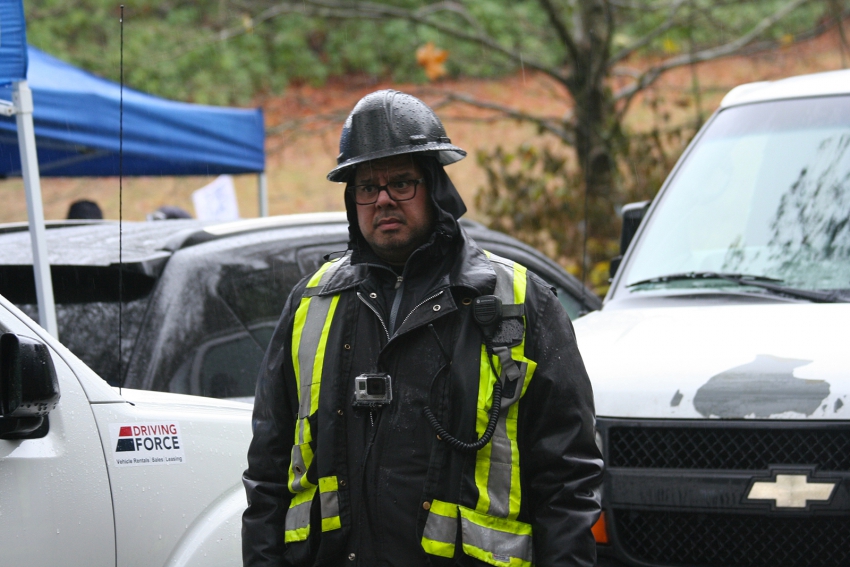 He looked nervous, and tried to appear as if he wasn't paying attention to what I was doing. When asked why he would bother filming a reporter, he turned off his camera and walked away without a word. At a distance, ensconced behind the fences and protected by an injunction, the other Kinder Morgan workers were not reachable for comment.

Activity at Borehole One

The lower drill site, known as borehole one, was located deep within the forested areas of the Burnaby Mountain conservation area. Though it was constantly alive with the movement of the Kinder Morgan workers, the forest around it always seemed still. The deep greens of the forest's cedars and old growth trees were shockingly beautiful in the evening light, especially when glistening with rain. Despite the site being hidden away in the trees, the sound of the drill invariably led those who sought it straight to where Kinder Morgan was working.

This site had a different feel from the one higher up where the majority of the protests took place over the last two weeks. The absence of a visible police presence enforcing the injunction boundary was conspicuous, and without any other protesters or observers there to watch over what Kinder Morgan was doing, the operation here had the eerie feel of a secret science experiment taking place in a deserted location. It was hard not to feel like an interloper, especially because it was much more difficult to get close to the drill and see what was going on. Nevertheless, it was clear that the drill was being driven hard. Work seemed to be going at a fast pace here. 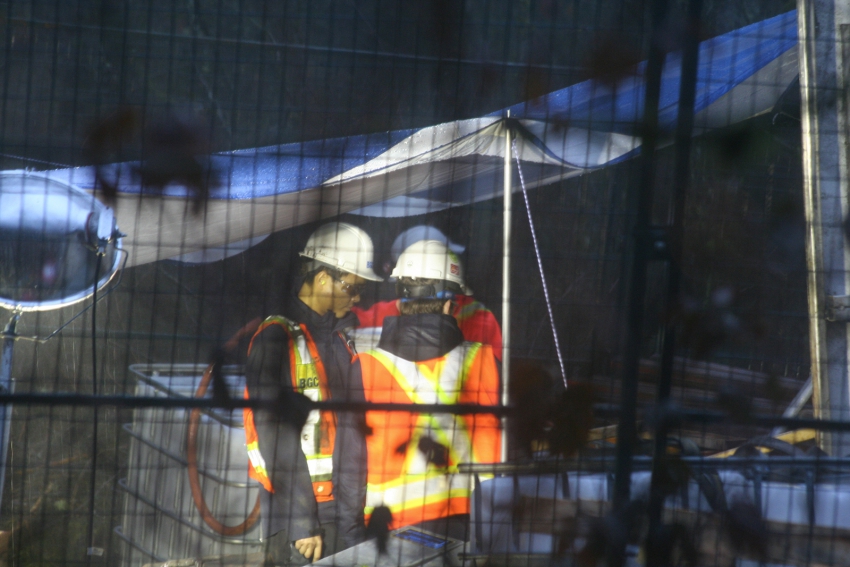 Workers congregating outside the drilling compound at borehole one.