The decision to downgrade the humpback whale's 'threatened' status comes just two months after the federal government lost a major court battle with environmental groups over four at-risk species, one of which was the humpback whale. 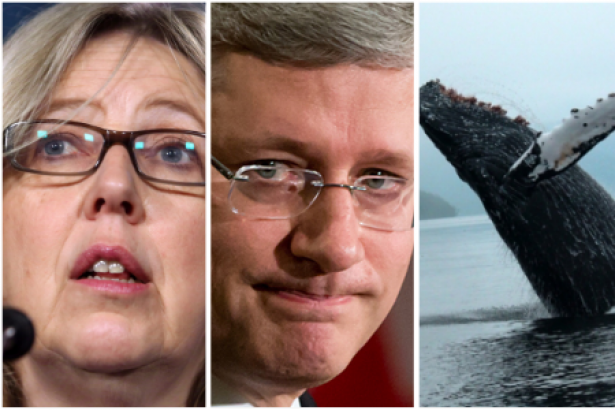 The feds' recent move to downgrade the protection of humpback whales comes just two months after it lost a lawsuit to five environmental groups including Ecojustice and the David Suzuki Foundation, in which courts declared that government had 'unlawfully' delayed recovery of four at-risk species threatened by the proposed Enbridge Northern Gateway pipeline.

The Pacific Humpback Whale was one of those four species.

Green Party leader Elizabeth May said that while it's "more complex" than the federal government "simply retaliating against the federal courts by changing the law".

But she added that the cabinet's choices on protected species is a "highly political one, not necessarily based on science".

"This announcement ironically occurred on Earth Day and appears to be well timed on the eve of the June cabinet decision on the approval of the Enbridge pipeline," she said.  "It looks as if they are blatantly using the cover of science to push the agenda of the pipeline, so that the protection of species doesn't hinder the need to increase the tanker traffic in an area."

Even though the whales had recovered from a low point during the mid-90s of about 1,400 humpbacks to around 20,000 in the North Pacific (with around 3,000 seasonally near the BC coast), May said it's too soon to knock them off of the protected species list.

"Though the species of humpbacks population is improving, we're not out of the woods yet and the legal protection should stay in place," she told the Vancouver Observer.

While admitting that the government's decision did have backing from the committee for the protection of species based on their scientific judgements, she said the decision seems to have been a unilateral one without any public consultation.

"The government did not consult the public on this, nor did they consult the American scientific counterparts in this matter," she said, adding that the federal government "appears to have a complete lack of awareness of species at risk."

Back in February, Ecojustice staff lawyer Sean Nixon had stated that it was "unacceptable" for government to continue to miss deadlines in the Species at Risk Act to protect the Pacific Humpback Whale, Nechako White Sturgeon, Marbled Murrelet and Southern Mountain Caribou.

Officially, the federal government is required to produce a "recovery strategy" for all species on the endangered and threatened lists, including protection of essential habitat. But the Harper government has so far neglected to do so for humpbacks and another 170 species.