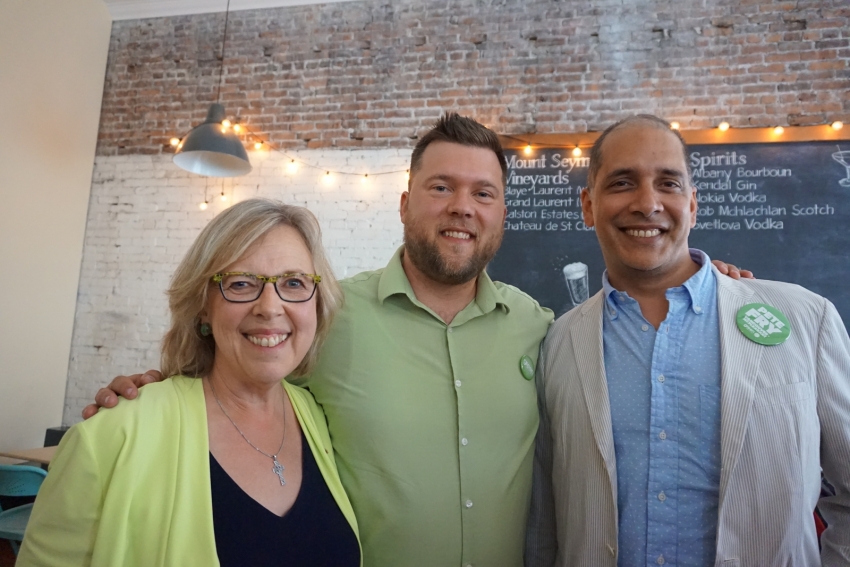 Green Party leader Elizabeth May, federal Green candidate Wes Regan and Pete Fry, BC Green Party candidate for the riding of Vancouver-Mt.Pleasant.
The Prime Minister has committed "serial acts of vandalism against all areas of public policy — criminal justice, immigration and refugee law, health policy, environment, foreign policy," federal Green Party leader Elizabeth May told the Vancouver Observer while in Vancouver on Sunday.
"He's caused the destruction of proper distance between partisan political power and independent expert civil service. He's corrupted our system of government to an elected dictatorship."
May spoke at the Rainier in downtown Vancouver at the campaign launch for federal Green candidate Wes Regan. A former executive director of the Hastings Crossing Business Improvement Association, Regan agreed the upcoming election was important for changing the direction of federal government in Canada. He contributed a number of stories to the Vancouver Observer, including "Bill C-51 could be the biggest bait and switch we've ever seen."
"The Harper government had made a wholesale effort to not only destroy protection but then to destroy data and destroy knowledge," Regan said, speaking of the Conservatives' record of "eviscerating of the Navigable Waters Act, attempting to close the Experimental Lakes Area, and dumping books from the Department of Fisheries and Oceans Library."

"We can't make good public policy if we don't have these things."
May said she was confident the Canadian people would vote out Harper in 2015. She said the timing of the federal election was extremely important, as it would come before the UN climate talks in Paris this December.
"I'm the only MP other than the minister of environment to have gone to these climate negotiations for years now... I'm working right now to be really helpful for whichever party is closest to forming government. All of us Greens are willing to work behind the scenes, whatever it takes, to make this climate treaty work, and that will be right after the election."
Regan said more and more Canadians were starting to see how important climate and environment are to public policy, and said it was an election issue.
"I really feel the Green party is emerging as a more and more viable alternative to Canadians in the way of renewables and new technology," Regan said. "In terms of the post-fossil fuel world, no party has been as progressive and up front about that."
Read More:
Share on Facebook Share on Twitter