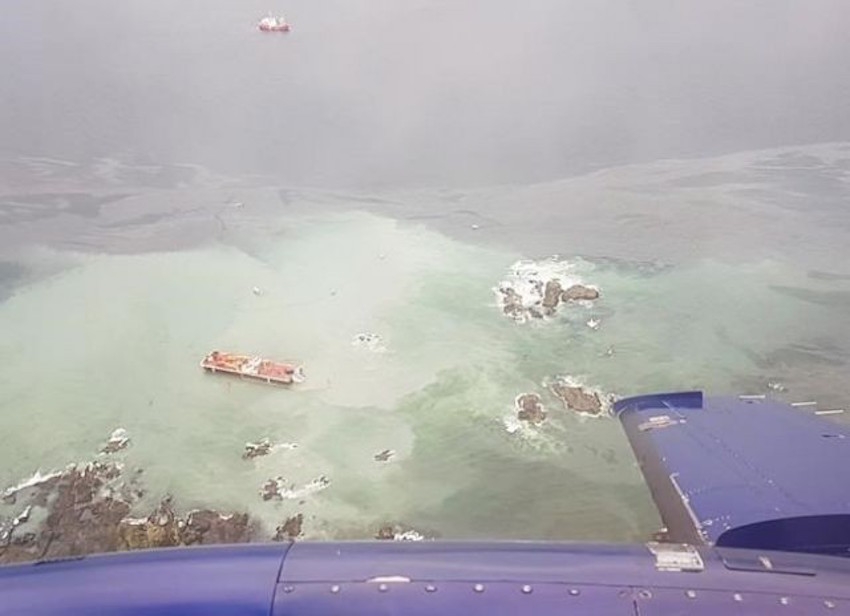 A sunken tug on British Columbia's central coast near the Great Bear Rainforest is leaking diesel fuel. Photo by The Canadian Press.

Efforts to remove thousands of litres of diesel fuel from a sunken tug are expected to begin on British Columbia's central coast near the Great Bear Rainforest.

The process, called "hot tapping" is aimed at removing more than 200,000 litres of diesel fuel still aboard the Nathan E. Stewart, which ran aground on Oct. 13 while pushing an empty fuel barge at the mouth of Seaforth Channel, about 20 kilometres west of Bella Bella.

An oil skimming vessel, is also expected to reach the scene today as the tug sits under about nine metres of water and continues to seep fuel from its damaged starboard and central diesel tanks.

Fuel is bubbling up from the tug, but a report issued from the scene says it is being contained by a boom, while the exact amount of diesel spilled remains unconfirmed.

The report also says an oily sheen is escaping containment and Fisheries officials closed nearby shellfish harvesting on Friday.

The Heiltsuk Nation issued a news release calling the situation an unfolding environmental disaster because it threatens clam beds vital to the community's culture and economy.

"We don't know how many years or decades it will be before we are able to harvest in these waters again," says Chief Councillor Marilyn Slett in the release.

Federal, provincial and Heiltsuk Nation representatives are working with Texas-based Kirby Corporation, the owners of the tug, to plug the leaking vessel, and expect to begin night operations in hopes of speeding up the process.

This comes as long-range weather reports show an approaching storm with winds of up to 90 kilometres per hour, due late Wednesday.

It's hoped the tug can be lifted from the water by crane and barged out of the area once its fuel tanks have been pumped out.