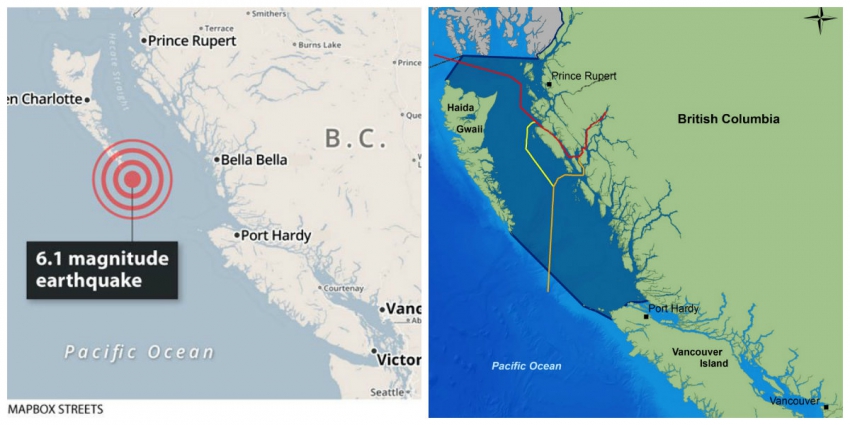 Left: The epicenter of 6.2 earthquake off Haida Gwaii; Right: the proposed route of tanker traffic for Northern Gateway pipeline

A magnitude 6.2 earthquake off the coast of Haida Gwaii has shaken up the debate over possible impacts of such a quake near the Northern Gateway pipeline termination point or on bitumen tankers in open water.

Proposed shipping routes bring tankers close to the edge of the island chain near the epicenter of this morning's quake, which registered approximately 186 kilometres west-south-west of Bella Bella.

Bill Yovanovich of Skidegate, a community of 900 people on the west coast of Haida Gwaii, was in bed when the earthquake struck. He said it was "like a heavy wind" and although the damage was minimal it has reignited fears of the potential to respond to a major spill in the isolated region.

"It's a big concern," Yovanovich said in a telephone interview with the Vancouver Observer.

"We're pretty remote up here and after watching how mishandled the response to the English Bay spill has been it makes me wonder if all the homework has been done."
Yovanovich said today's earthquake has brought back memories of a larger 7.7 magnitude earthquake that caused many to evacuate after warnings of a possible tsunami brewing off the coast line in October of 2012.

Back then, Old Masset economic development officer John Disney said, the experience was harrowing and not uncommon.

"We have the top two earthquake records in Canada now and really we take it in stride. We have earthquakes here all the time."

Master Mariner Mal Walsh, a marine and oil expert with over 40 years of experience in international oil exploration and shipping, noted in two previous articles in The Vancouver Observer that while he does not oppose pipelines, the tanker routes proposed by Enbridge present serious risks to the B.C. coast.

"The Enbridge tanker transport proposal, in its current form, represents too great a risk to a remote and still pristine area of BC’s Central Coast, a region of this coast that is exposed to the most severe winter weather conditions," Walsh wrote in July 2012.

Walsh's commentary did not mention earthquakes specifically but focused on extreme weather in the Queen Charlotte Sound that could become a serious threat to the coast in the event of a bitumen spill.

"Do we really think that the high level of shipping proposed would operate without problems, year in and year out?" Walsh asked at the time.

"And this is not only considering the narrow channels of the port approach, but even more critically in the open ocean of the offshore approaches to the coast."

Kitimat, the exit point of Enbridge's Northern Gateway pipeline, operates a port situated over 100 nautical miles from the open hostile waters of the Queen Charlotte Sound and the Dixon Entrance.

Walsh said this can only be reached through "navigationally difficult and narrow channels," and the shipping plan "clearly represents a cheaper fix for the pipeline termination point for tar sands bitumen export." He said this design shows "the lack of respect given to the power of the sea and the vagaries of human error or mechanical breakdown."

Requests for comment from Enbridge and the federal Ministry of Environment received no response by publication time.

However, the MoE has stated in response to previous stories that Canada has a "polluter pay" system in place to address spills and a mobilized combined response effort from government and private enterprise the West Coast Marine Response Corporation to contain the damage.