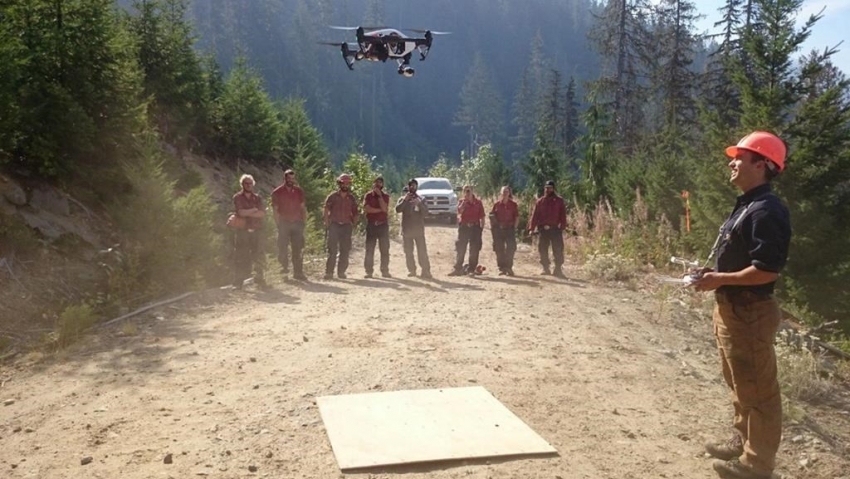 VANCOUVER — Drones flying above wildfires in British Columbia last summer hampered aerial efforts to control the blazes. But around the same time, the province was also using the unmanned aerial vehicles to determine if drones could be used to help fight wildfires.

The B.C. Wildfire Service contracted two commercial drone companies in July and August to soar above the Boulder Creek and Elaho fires near Pemberton and the Rock Creek fire just north of the Canada-U.S. border.

"It was very much kind of a small-scale trial to see how they could integrate, what kind of products they could generate for us," explained chief fire information officer Kevin Skrepnek.

The drones flew in areas where flames had already been doused, mapping fires and using thermal imaging to look for hotspots that could flare again.

Typically, finding hotspots is done with helicopters using a thermal scanning device or people searching the forest floor on their hands and knees, Skrepnek said.

"What we're trying to accomplish is making the process of putting (fires) out more efficient," he explained.

Three of the company's machines were used in the test, each equipped with infrared scanning technology. They flew mostly at night, at times soaring almost 500 metres in the air.

The team would then compile the data and get it to fire crews by the next morning to help them focus fire-fighting efforts.

In order to fly over the blazes, Atwood and his team needed to get a special flight-operation certificate from Transportation Canada that allowed them into the restricted airspace.

Not having the proper training and permits can cause big problems, Atwood said.

"When you have people who take what is essentially a tool and fly it without regard for human life and property, it can not only be damaging to those trying to fight the wildfire, but incredibly damaging to a program that's trying to take on new technology as well."

An unauthorized drone flying near the Testalindin Creek fire near Oliver, B.C., in August grounded eight helicopters and five planes for more than three hours.

It was the most serious incident involving drones around wildfires this summer, but it wasn't the only time the machines threatened firefighting efforts.

"Obviously, that's a pretty big safety concern to us. If it were to come into contact with our aircraft, that could have potentially dangerous results," Skrepnek said.

It's unclear what the unauthorized drones were doing in the restricted airspace and no one was ever caught.

During the test project, the drones were communicating and co-ordinating with fire crews, Skrepnek said.

"It is two very different issues involving the same type of aircraft. But it is, I think, just an opportunity to remind people again that unsanctioned use in and around fires is illegal," Skrepnek said.

No decision has been made on whether drones will become a regular part of the province's firefighting arsenal, but Skrepnek said the experience was positive.

Other firefighting forces are testing drones, too, Skrepnek said, including Alaska and the U.S. forest services.

Cost of the trial hasn't been tallied.

"But certainly, if you do look at using this product compared to the hourly cost of flying a helicopter, it would certainly be a fraction of the cost," Skrepnek said.