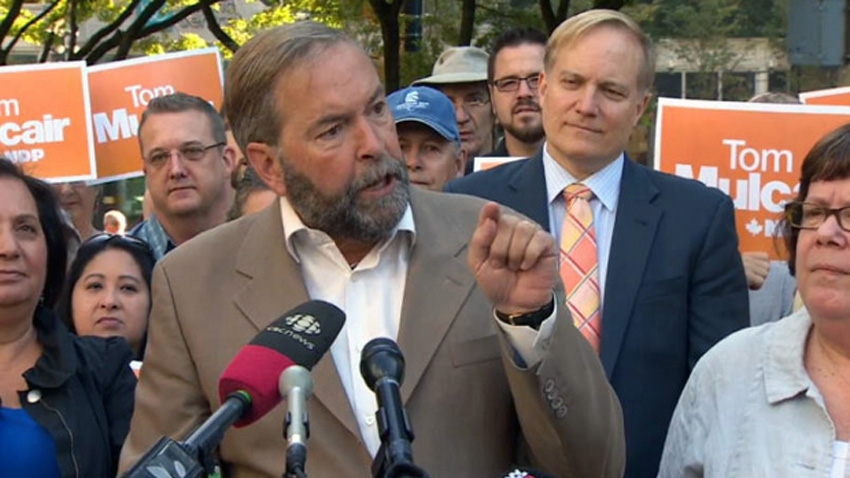 The prime minister's latest promise to make it a crime for Canadians to travel to specific countries or regions where they could fight alongside terrorist organizations is just a campaign gimmick, New Democrat leader Tom Mulcair told reporters in Vancouver this weekend.

“There’s very little evidence to show that this is going to have any concrete effect, I don’t know of too many flights between Toronto and the war zones, most of them are going through other countries so it won’t make a big difference practically speaking,” Mulcair told reporters after attending an NDP rally.

Harper says a re-elected Conservative government would establish “declared areas” – regions of the world where terrorist groups like the Islamic State of Iraq and the Levant hold control and use their base to recruit and train followers.

Forgoing casual campaign garb for the more prime ministerial suit and tie, Harper made his announcement at a news conference in Ottawa, flanked by Canadian flags.

He said national security agencies would track Canadians who travel to those areas; those who return would be required to prove they were in the region for humanitarian reasons, or as a journalist covering the conflict. Similar laws exist in Australia, which has designated parts of Iraq and Syria as no-travel zones.

Liberal leader Justin Trudeau called Harper’s announcement a diversion designed to take the attention of Canadians away from his government’s failed economic plan.

But, he added, Harper would have to answer a lot more questions than he did Sunday about any policy that proposes to take rights away from people.

On Wednesday, Duffy is scheduled to be back in court as his trial’s star witness takes the stand: Nigel Wright, Harper’s former chief of staff and the man who gave the disgraced former Conservative senator $90,000 to repay his disallowed housing and travel expenses.

Asked at a campaign event in the Ottawa-area later on Sunday about how Wright’s pending appearance might change the dynamic of the election campaign, Trudeau called it a reminder of Harper’s “lack of respect for democracy and of his extremely poor judgment.”

Harper has long insisted that Wright acted on his own and did not say anything about the transaction to him or anyone else in his office. But he was questioned Sunday about the trial — and in particular what Wright meant when he wrote in a February 2013 email that he’d been given a “good to go” from the prime minister.

“I did not know that Mr. Wright had made a payment to Mr. Duffy,” Harper replied. “As soon as I learned that, I made that public. And Mr. Wright has been clear about that. This is the purpose of the process and those who are responsible and I’ll let the court do its work.”

And “good to go”? “The words you’re quoting are not my words, they’re somebody else’s,” he said.

When asked about the ramifications of his proposed anti-terror measure, Harper struck a defiant tone.

“There is no right in this country to travel to an area under the governance of terrorists; that is not a human right,” he said to a barrage of partisan applause.

He acknowledged – grudgingly – that humanitarian workers, journalists and diplomats might “theoretically” have legitimate reasons for travelling to such a country.

“That is something that we have to nip in the bud before trained terrorists return to this country.”

Harper also volunteered an answer to a question he wasn’t asked, reacting to remarks made last week by “star NDP candidate” Linda McQuaig, who told a CBC panel discussion that for Canada to meet its climate change targets, “a lot of the oilsands oil may have to stay in the ground.”

The comments contrasted with NDP leader Tom Mulcair, who has been open to oilsands development provided there is rigorous environmental protection and legislation to force oil companies to pay for pollution they create, including increased greenhouse gas emissions. Mulcair does, however, support a west-to-east pipeline for moving oilsands crude to market.

“That is the NDP’s not-so-hidden agenda on development,” Harper said.

“The NDP is consistently against the development of our resources and our economy. That’s why they have been a disaster wherever they’ve been in government and why they would wreck this economy if they ever got in, and why they must never get into power in this country.”

Trudeau also chimed in, saying the exchange shows that both Harper and Mulcair are in “extreme positions” on oil extraction.

“What Albertans know, what all Canadians know, is the way to grow a strong economy in the 21st century is by caring for the environment, and you don’t get to make a choice between one or the other,” he said.

Mulcair repeated his party’s position in Vancouver on Sunday and stressed that developing Canada’s natural resources must go hand in hand with reducing climate change.

“Sustainable development is not a slogan, it’s something that has to become very real,” he said. “Canada’s reputation is being hurt on the world stage, simply because we’ve been working against the planet.”