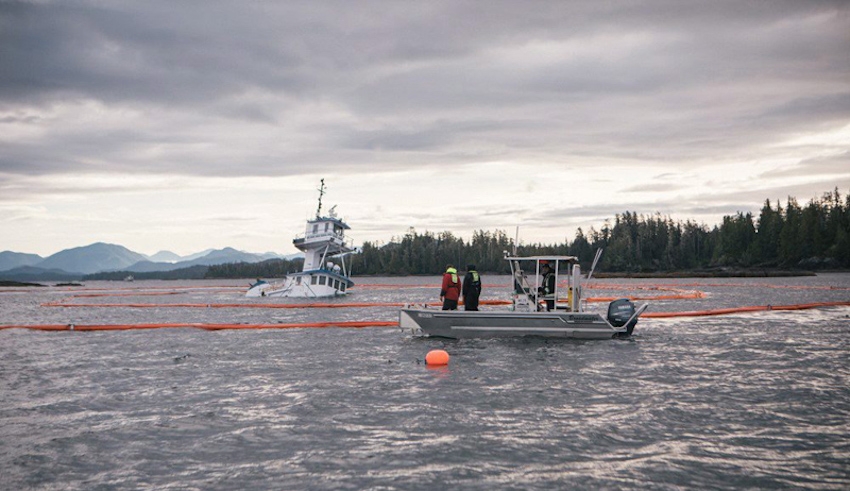 A report says two tanks containing oil or contaminants from a submerged tug west of Bella Bella, off British Columbia's central coast, were either torn open or severely damaged when the vessel ran aground.

Despite bad weather that has complicated salvage efforts, divers were able to check the bottom of the Nathan E. Stewart on Sunday, as it rests in nine metres of water in a channel about 500 kilometres north of Vancouver.

A joint situation report issued by the American tug owner and federal, provincial and First Nations groups says divers found the lube tank torn and pumped out nothing but water on Sunday from the severely damaged bilge tank.

When the tug ran aground on Oct. 13, the lube tank contained about 2,400 litres of oil and bilge tank was believed to have held nearly 3,700 litres of water, oil, sludge and other engine-room and ship's contaminants called dirty bilge.

The report says about 1,200 litres of a lube oil and seawater mixture has been removed while the hydraulic oil and gear oil tanks have been pumped, but it does not mention any further recovery of the thousands of litres of diesel oil still believed to be aboard.

Gale force winds hampered salvage efforts over the weekend, breaking apart a boom surrounding the tug on Friday, but the report says replacement booms have held since then.

Tug owner Kirby Offshore Marine hopes to drain the vessel's fuel tanks and use a crane to lift it onto a barge for removal from the area off the coast of the Great Bear Rainforest.

Contaminants from the tug prompted an almost immediate closure of bivalve shellfish fisheries in Seaforth Channel and Gale Passage.

The Heiltsuk First Nation has described the situation as an environmental disaster that has severely harmed its economy because they depend on harvests from clam beds.

Chief Marilyn Slett has said her community is in a state of shock over the latest setback involving the broken booms and questioned why more seaworthy booms weren't installed after the tug boat sank.