Filmmakers to give a free public screening of its Kinder Morgan film in Vancouver and Victoria, while they seek online votes to fund the next stage of their project. 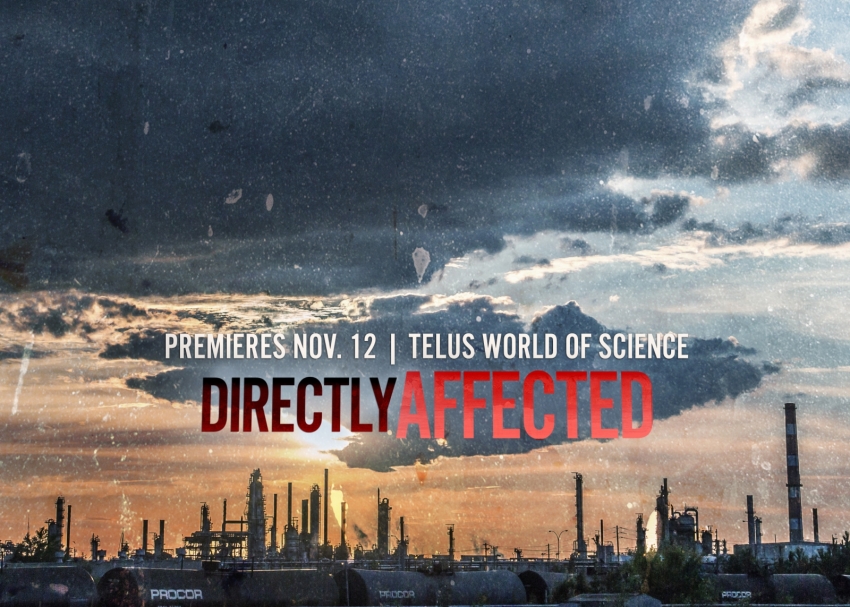 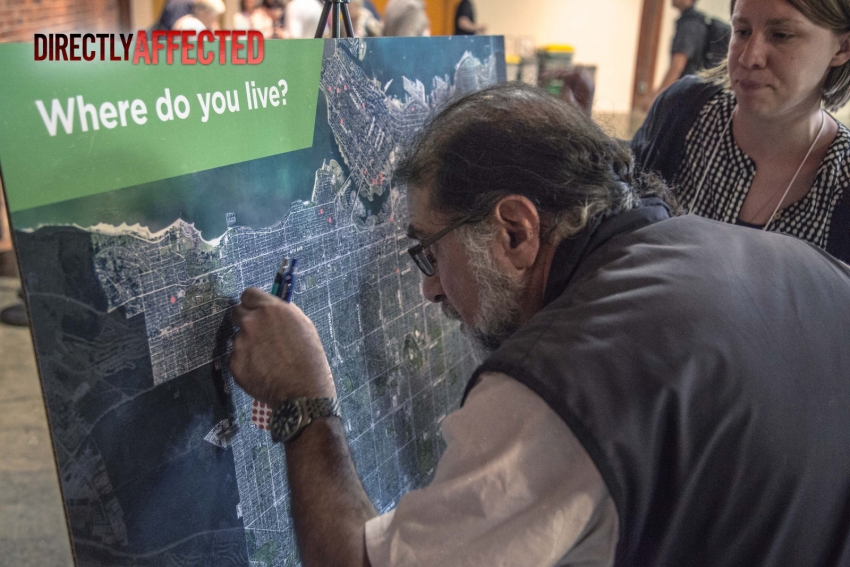 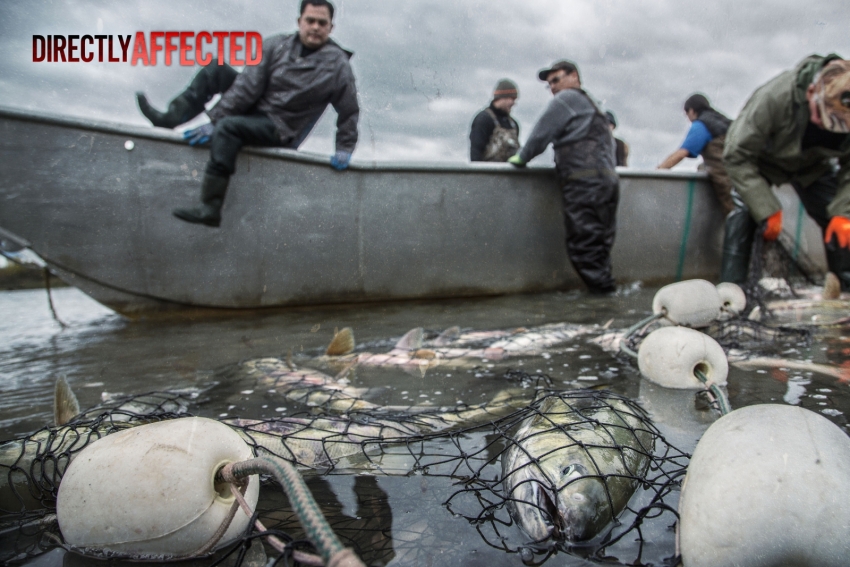 With tensions heating up between Kinder Morgan and Burnaby residents, a pair of Vancouver filmmakers -- who’ve been pointing their lens and microphone pole at people directly affected by the company's proposed pipeline -- are seeking support for the latest edition of their film - Directly Affected.

Starting Monday, Zack Embree and Devyn Brugge are asking the public to vote for their film in a Telus StoryHive funding program, that lets "the crowd" decide which project gets money.  The project competes against 80 other films in the region.  Those who wish to vote, can go here.

Embree says his film has taken on new prominence since the company's legal attack this past week.

“We’re seeing that Kinder Morgan has made a misstep here… in going after and attacking citizens who are dissenting on public land," said Embree on Sunday.

“We see there’s a very aggressive effort to push this through -- and with this type of aggression you can also see the opposition mounting,” he added.

Kinder Morgan asked the B.C. Supreme court for an injunction to forbid what it sees as the key leaders who have “conspired” to obstruct its crews from doing pipeline survey work.

“Our preference is to work cooperatively, and we respect the right to peaceful protest. However, we are required by the NEB to complete these studies in order to support our application, and we are pursuing our legal options,” a Trans Mountain spokesperson wrote last week.

The company also filed a civil suit, claiming it will suffer millions of dollars per month from delays.  But support for the defendants – including two SFU professors, a university admin worker, a retiree and a young activist – has grown substantially, said Embree.

“The [law] suit is blowing up in [the company's] face because people from around the world are starting to pay attention to this story,” he added.

This is not the first time the film-makers have attempted to tap Telus' StoryHive program. Last April, the initiative granted the film $10,000 after "overwhelming" number of public online votes for the project, said Embree.

“This movie is the direct result of popular support from our community.  People voted for us and said ‘yes – this is a story I want to see told.”

A new edition of the film will be given public screenings for free on Wednesday evening at the Telus World of Science World in Vancouver, and next week at the University of Victoria on Nov.19.  Tickets can be found online.

Embree says the need for Directly Affected just keeps getting bigger and bigger.

“This story is moving so rapidly.  We can see from developments on Burnaby Mountain and in the B.C. Supreme Court -- these types of flash points are going to be increasing.  So we’re interested in changing the frame of Directly Affected into a web series.” 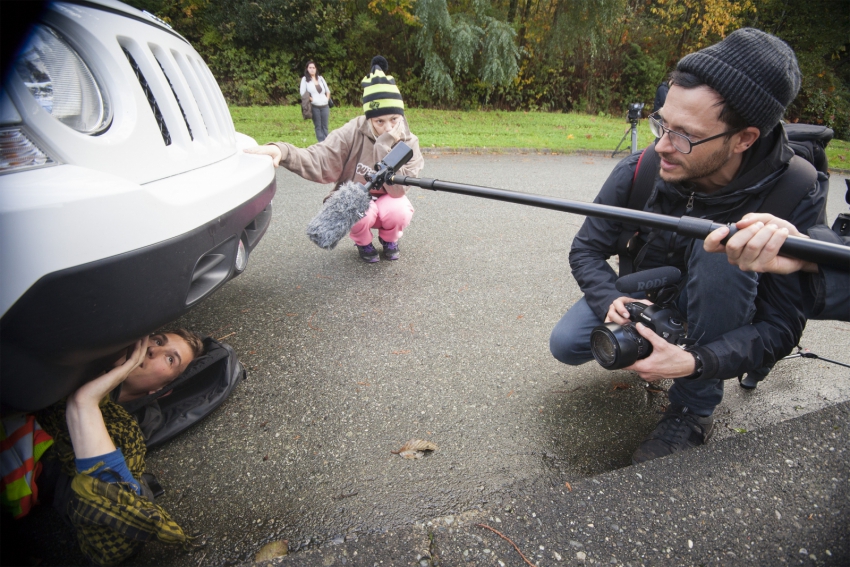 In the first edition of the Directly Affected, Embree and Devyn crisscrossed British Columbia interviewing whale scientists, distinguished economists and Aboriginal communities, including the Stó:lō and the Tsleil- Waututh Nation.

Also interviewed were Mayors Derek Corrigan and Gregor Robertson, as well several Burnaby citizens, such as Mary Hatch.  Her home was dramatically sprayed with oil when the Kinder Morgan pipeline burst in 2007.

The film’s name is a play on words from a contentious requirement of the National Energy Board that public participants for its pipeline hearings must be “directly affected.”

The requirement came about by the Harper government -- via recent sweeping omnibus legislation -- to restrict the number of participants, and speed the approval process of pipelines. 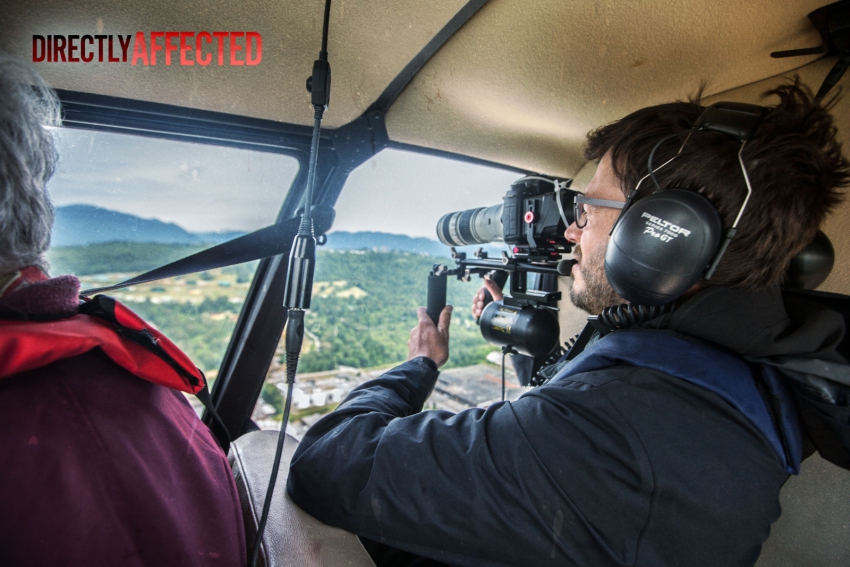 Embree said he has tried repeatedly to get an interview with Kinder Morgan representatives, but so far has not had much luck.   The National Energy Board also declined to be interviewed.

At the Wednesday Vancouver screening, there will also be a panel discussion with economist Robyn Allan, Biologist Misty MacDuffee, Carleen Thomas with Tsliel-Waututh Nation, and SFU biochemist Lynne Quarmby.  Moderating will be Tzerborah Berman. Vancouver Observer is the media sponsor.

The film is made in partnership with Raincoast Conservation Foundation. 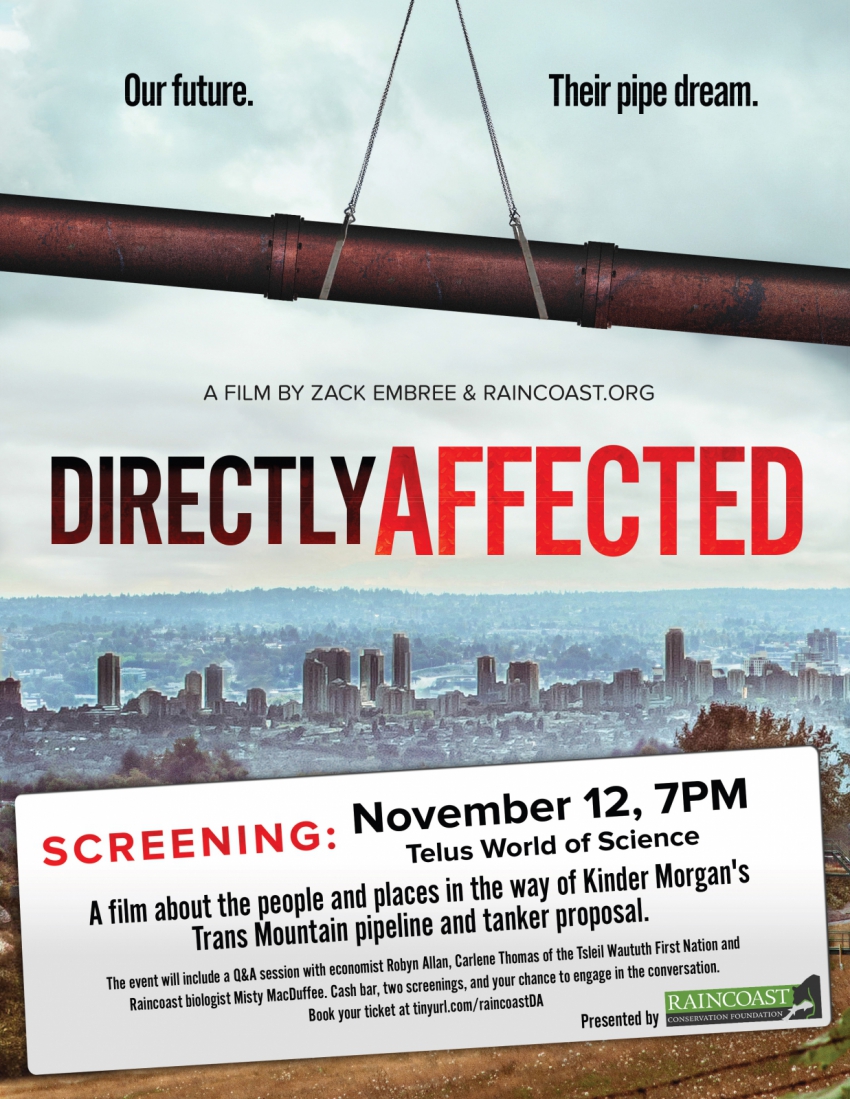