Tutu said oil sands were an emblem of an era that had to end, and encouraged corporations to cooperate on preserving the environment. 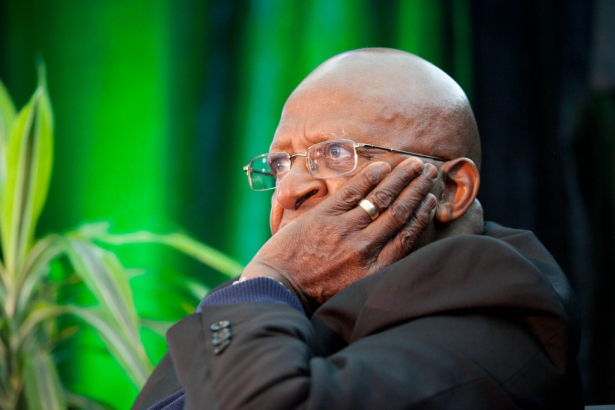 Photo by Bill Weaver for the Vancouver Observer

"The oil sands are emblematic of an era that must end," said South African Archbishop and Nobel Peace Prize Laureate Desmond Tutu at a conference in Fort McMurray, "As Long as the Rivers Flow", held to highlight First Nation treaty and the threat of climate change.

Archbishop Tutu had strong words for bitumen extraction from Alberta's oil sands the result of "negligence and greed".

While deeply critical of Canada's rapid oil development, Tutu stressed that he could not tell Canadians what to do, and said ultimately Canada already knew what had to be done to prevent further environmental degradation.

Despite his strong words, Tutu also emphasized cooperation over conflict, and urged large corporations to work on environmental preservation.

Prior to the speech, Tutu went on an aerial tour of the tar sands with Suncor executive vice president Mark Little. Shortly after stepping off the helicopter, he told reporters:

“No one wants to see an end to industry. If you have industry that is responsible, they have to be commended and encouraged. It’s not as if we go around saying, ‘to hell with them, whatever. Clobber them.'”

He said cooperation is  far better and "cheaper" than opposition. Tutu stressed that every person was a member of the same global family, and that it was far better to work together than “be at loggerheads with daggers drawn.”

Little then spoke with media and said that "many environmentalists" work at Suncor and care deeply about protecting the land.  He repeatedly referred to sustainability efforts such as recycling enormous worn out tires used by mining trucks and other initiatives.  He said Suncor has never had a release of oil into the Athabasca River and pointed to natural deposits of tar.

Tutu was among 11 Nobel Prize Laureates who signed a letter urging U.S. President Barack Obama to reject the Keystone XL pipeline proposed by Canadian pipeline giant TransCanada. The controversial pipeline would 830,000 barrels of bitumen per day from Alberta to refineries in the Gulf Coast.

TransCanada Corp. spokesman Davis Sheremata said in a press release that Archbishop Tutu is entitled to his opinion, but that oil also helps people in their daily lives.

“Oil powered the jet that flew Mr. Tutu to Canada from Africa, produced the fuel for the helicopter tour he had planned of the oil sands, and helped manufacture the microphones and TV cameras for his press conference,” the release said.

A significant part of the conference, which was co-sponsored by the Athabasca Chipewyan First Nation and Toronto-based law firm Olthuis Kleer Townshend LLP, focused on First Nations' treaty rights.

"The greatest sin that a man can do is to destroy Mother Earth," said Francois Paulette, a Dene Suline hereditary chief and member of the Smith’s Landing Treaty 8 First Nation. Paulette had helped launch an era of treaty claims, with his historic 1973 Supreme Court victory that ruled in favour of Aboriginal rights over land that was slated for development.

Eriel Deranger, communications director for the Athabasca Chipewyan First Nation, opened the second day of the conference with a talk on building coalitions. "We will not tolerate threat to our rights, lands, water and to us all and all future generations," she said, in a room packed with First Nation attendees and sprinkled with oil company lawyers and journalists.

"It is a fine balance up here.  This industry has brought huge economic benefits to all of the First Nations in this region, but we have to think about balance, and ask is this industry sustainable?

"We have to look at ways to clean up the mess that is already here and look at ways of sustaining the economy and the identity and the culture of First Nations people," Deranger said.

"Internalized oppression is perpetuating the cycle of oppression. If we don't break that cycle, break the process of colonization and understand our strength as original inhabitants and original governments of this country, we'll never make it.  We have to teach our communities.

"We have to break the cycle.  Truth and reconciliation is such an important thing.  We have to come back to a deep understanding of our rights and the powers we hold as Indigenous people," Deranger said.