David Suzuki: "People are desperate and need to put their bodies on the line" 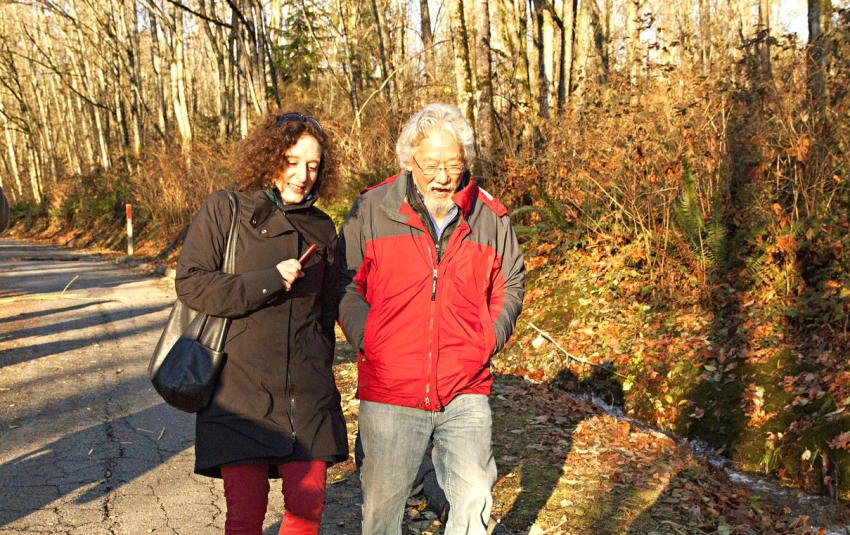 One of the biggest highlights of the Vancouver Observer's news coverage this year was the fiery, impassioned speech that Canadian environmental icon David Suzuki gave at the Kinder Morgan protest on Burnaby Mountain.

Shortly afterward, he walked down the mountain and spoke to Vancouver Observer publisher and founder Linda Solomon Wood about his thoughts on Kinder Morgan, his grandson, Tamo, and the protest that sparked over 100 people's arrest in November. Here's the transcript:

Linda Solomon Wood:  What would you say to Kinder Morgan?

Daid Suzuki I would say, look, you're a sunset industry. I mean, What do we expect Kinder Morgan to say? Their job is to make money and they'll do it however they want. I'm not going to change their mind on that."
LS: Your grandson made a big impression. He inspired a lot of people. We actually posted your story and it went wildly viral.
DS: How did that letter get out, by the way (laughing).
LS: It was on Facebook. You're still one of the most respected and beloved people in Canada. And for you to get out like this is quite amazing.
DS: Why? It's just what I've always done.
LS: What would you say to regular Canadians about this? Is it an extreme thing, to protest, or is it a mainstream thing?
DS: No, it is a mainstream thing. But it's a clash between two world views. But unfortunately the one world view represented by Kinder Morgan is all-powerful in terms of economic and political power. People are desperate and need to put their bodies on line.
Sun News Network reporter: What about the people who are bringing their children here today? Do you think that's a good thing to do at these protests?
DS: Holy cow. Who are you representing?
SN: I'm with Sun Media.
DS: I think it's up to them. It's up to them. I think it's a measure of how serious of how serious...(laughing) Why the hell did I bother? I'm in serious discussions, not comedy. I've had enough of..."
SN: I don't think it's a funny question.
DS: No no no, Sun Media is not serious media.
SN: I'm asking a serious question.
DS: I'm not interested in talking to you. Sorry.