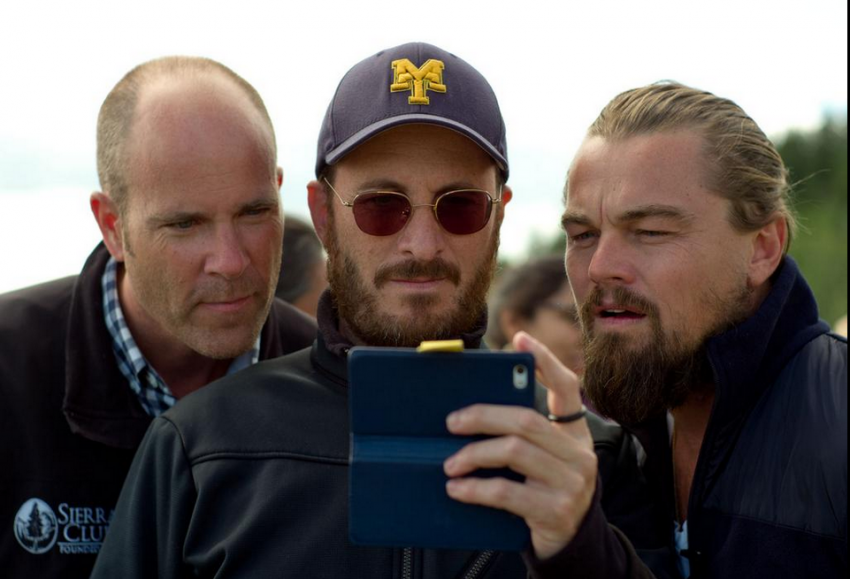 When asked how Noah's struggle in his most recent film influenced his decision to visit Canada's tar sands, Darren Aronofsky was intrigued.

"I like where you’re going. Very interesting." he said. "Continue."

"Noah is about a good man who has to struggle with outside forces that  push him to become an evil man," a reporter said.  "We're all struggling with our role in contributing to climate change."

"When we first started Noah, we noticed that in the original story of Genesis there were environmental ideas in there...God wanted to destroy the world because man filled it with violence," he said.

"There's an interesting connection to what’s happening now," Aronofsky said. "My team started to research the most polluted places on planet earth to see what the connection is between Noah’s world and our world. My partner is from BC and she said, 'Have you heard of tar sands?'"

"The images coming out of the tar sands were so intense. I wanted to go and have a look at it."

Aronofsky, who studied biology in university, was in northern Alberta last week with Leonardo DiCaprio, the Oscar-nominated star of Wolf of Wall Street, who was working on an upcoming enviro-documentary.

What the filmmaker saw brought to mind the Book of Genesis. Its conflicting messages pit the notion of protection of against dominion over Creation, a theme dramatized in Noah by Russell Crowe.

"With Adam and Eve - there are two messages. God says we are the stewards of the earth, and on the other hand, He says we have dominion over it. That’s a conflict that's been going on between environmentalists and the industrialists for a long time now.

"What I’ve concluded is that we're supposed to have a balance. We’re supposed to have responsibility to the earth. But companies in the tar sands have no strategy of how to clean it up or do it sustainably - it's really out of control."

Aronofsky said he was stunned by the parallels between Canada's laissez-faire approach toward the tar sands and America's attitude toward Wall Street.

"To find out you guys don’t have an equivalent to the EPA (Environmental Protection Agency) was shocking to me. It’s clear industry needs to be regulated….there’s so many things that could be done, easy things that could put a better situation in place there."

In Aronofsky's Noah, Noah witnesses a miracle as he stands before a devastated landscape similar to the tar sands. When he lays down a seed, the landscape transforms into a lush forest, a paradise suggestive of the Garden of Eden. It provides Noah with the trees he needs to construct the arc.

Does Aronofsky believe it will take a similar-sized miracle to halt climate change, VO asked.

After a long pause, Aronofsky said, "I have great faith in people. We're able to figure out solutions. We can’t just give up."

He said it won't take a miracle but the seed is clean energy. And the alternatives are readily available.

Aronofsky really likes Canada and not just because he's married to a British Columbian.  He said he's always thought of Canada as a "progressive, green paradise."

Although that view of Canada has been tarnished by the trip to the tar sands, he told the Vancouver Observer  he's  working with Canada's literary icon, Margaret Atwood, another avid environmentalist, on his next film.

Aronofsky spoke to the Vancouver Observer from New York City.