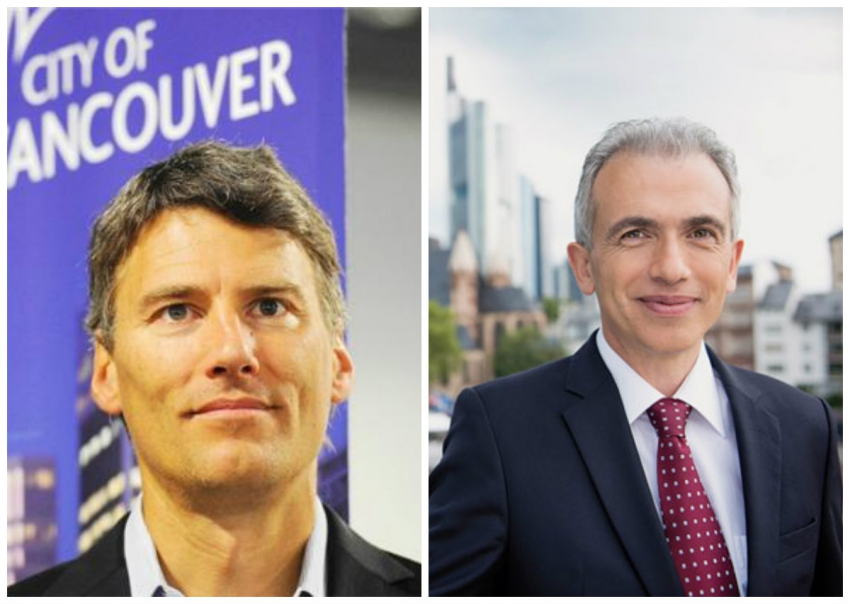 Left: Vancouver Mayor Gregor Robertson. Right: Frankfurt Mayor Peter Feldmann. Frankfurt is among the cities in the world that have established goals to shift away from fossil fuels by 2050.

City Council made history by voting to support a shift to 100 per cent renewable energy sources, becoming the first city in Canada to take this step.

In the motion, which passed unanimously, councillors directed staff to work on a package of policies that would effectively convert the entire city to run on clean and renewable energy.

The motion aims to reduce greenhouse gas emissions in the region and cut rising costs due to climate change in Metro Vancouver, now pegged at $9.5 billion.

In his introduction, Mayor Gregor Robertson called climate change "the most daunting and important challenge of our time." He called the consequences of not addressing it "catastrophic" and said we can no longer wait for federal governments to act.

"Cities," he said, "as the most direct level of government, need to take action."

Green Party Councillor Adrienne Carr spoke to the importance of the decision, her voice full of emotion.

"In the three years that I've sat here, there's no motion that more compellingly addresses the issues that are at my heart," she said.

Carr thanked Mayor Robertson for bringing the "very visionary" motion forward, saying, "it's pivotal for my children, for our children."

Mayor Robertson stated, that Vancouver will be "sharing knowledge, best practices and technologies" with other cities.

He said he hopes Vancouver will be at the forefront of developing new technologies to share with other cities and that, "there’s a big business case for it and an opportunity for leadership in the world."

Regarding the economic impacts on the city, Councillor Andrea Reimer said renewable energy would create more jobs than energy from fossil fuels.

"Cities that own renewables will own the future," she said.

Frankfurt, Germany, she said, a city on track to shifting to 100 per cent renewable energy by 2015, has reduced emissions by 15 per cent while its economy grew by 50 per cent. And, they've saved over 100 million Euros in energy costs, a number that's projected to increase.

In Copenhagen, where green houses gases decreased by 20 per cent between 2005 and 2011, a family of four is saving an average of 530 Euros on their electricity and heating bills each year as a result of the shift to renewable energy, she said.

The report will be shared with other governments at the 2015 United Nations Climate Change Conference in Paris in December.

The motion follows last week’s call for a Canada-wide shift to renewable energy by more than 70 leading Canadian academics. In addition to Vancouver, cities like San Francisco, Sydney, Stockholm, and Copenhagen also adopted targets to shift to 100 per cent renewable energy before 2050.