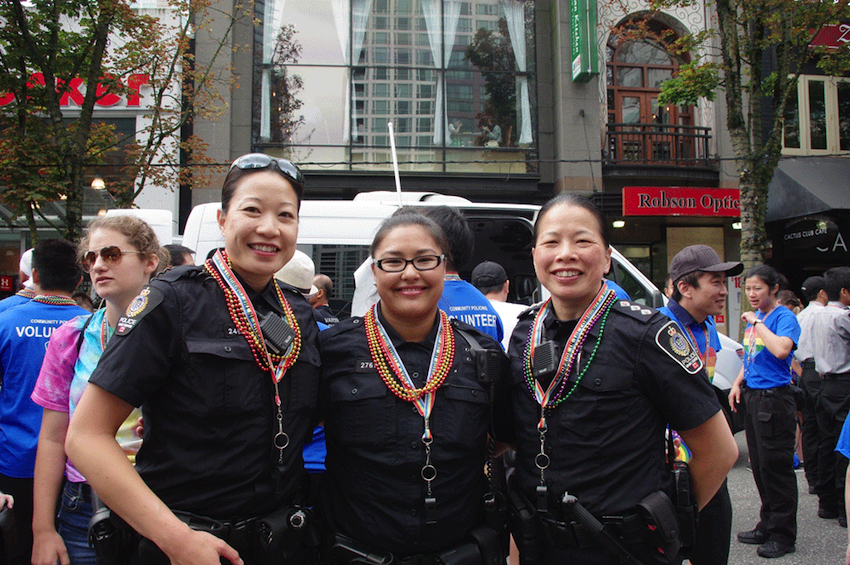 VANCOUVER — Organizers behind Vancouver's Pride Parade have countered demands that police be banned from marching in the city's annual event by suggesting that officers show up in fewer numbers and leave their uniforms at home.

Pride spokesman Kieran Burgess said Thursday that the Vancouver Pride Society is trying to find common ground between a local chapter of Black Lives Matter, an anti-racism activist group, and those who want to see police involved in the parade.

"A lot of people agree on this middle ground where police participate but perhaps not in uniform," Burgess said Thursday.

"One of the things we hear is, 'I agree with Black Lives Matter and I can recognize what they're saying, but I think police should still be given the opportunity to participate.' This is a way that that is realized."

Black Lives Matter Vancouver asked the Vancouver Police Department last summer to voluntarily withdraw from the parade as "a show of solidarity and understanding" because the presence of uniformed officers makes some minority groups feel unsafe.

Besides proposing a decrease in the number of officers in the parade and asking them to march in T-shirts, Vancouver Pride Society suggested that police increase their outreach to vulnerable groups who feel unsafe participating in the parade.

The Vancouver Police Department did not immediately respond to a request for comment.

Vancouver Coun. Tim Stevenson said the city would endorse whatever outcome is reached between the police and the pride society. He described law enforcement in Vancouver as one of the most progressive in North America.

"I used to be on the board of the Pride Parade and I was part of those trying to get the police into the parade, encouraging them. And when they came, whoopee!" Stevenson said.

"The police actually gave us legitimacy in a way that we hadn't felt before. I mean, imagine having the police in the Pride Parade."

Last week, a group of transgender activists presented the pride society with a petition urging it to allow police into the parade with uniforms, arguing that a ban on officers could undermine the positive relationship between the LGBTQ community and law enforcement.

Police have taken part in Vancouver's Pride Parade since 2002. They march as part of the city's entry, alongside firefighters and municipal officials.

The parade became a civic event in 2013, meaning the city began paying the bill for public safety costs related to police presence, as well as garbage and cleanup.

This year's parade is scheduled to take place in early August.

In a statement, the Vancouver Pride Society also said it should have more strongly condemned the online racism aimed at members of Black Lives Matter in response to the group's advocacy work.

"We tried to stay neutral and hold the middle ground in this conversation, and through doing that we realized after talking to Black Lives Matter that that created a space where a lot of hate and death threats and things like that have really been directed at them."

Trudeau and May kick off campaign at Vancouver Pride Parade