“The f-bomb is not illegal,” said a lawyer for protesters being sued by Kinder Morgan after recent clashes with the company. 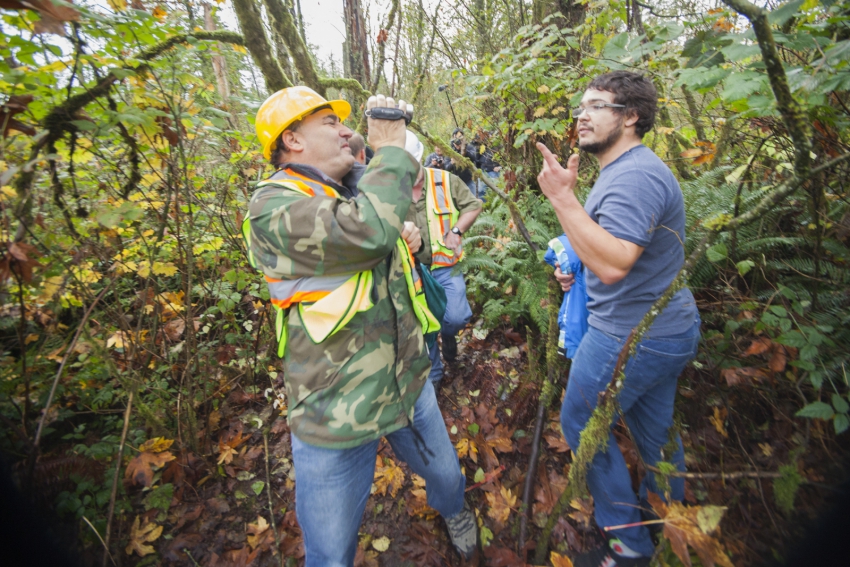 In what has been perhaps one of the more entertaining days of a high-profile court hearing regarding Kinder Morgan’s lawsuit against several citizens, a lawyer openly mocked the company in court for its description of how protesters behaved towards company crews.

Jason Gratl told the B.C. Supreme Court Friday that his protester clients’ use of snarls, a bullhorn and swear words did not constitute intimidation, but rather lawful expression by people highly frustrated by the company, and a lack of action on climate change.

“The f-bomb is not illegal,” said Gratl, who represents defendants Adam Gold and Mia Nissen.

He also presented photographs showing Trans Mountain crews smiling at protesters – the same crews who were said to have felt fear and intimidation.

Earlier this week, the company had said activist Adam Gold had recently held a bullhorn to within inches of a company employee.  In court today, Gold's lawyer presented a photo of that same employee that Gold had yelled at wearing protective earpieces.

“Which in many ways is a perfect metaphor for what is going on,” quipped the lawyer, to a rousing laughter in the court’s public gallery – the loudest of the week.

By Friday afternoon, Kinder Morgan's lawyer Bill Kaplan responded that bull horns can be "socially abusive" and swear words can be tortious (legally damaging).  He asked the court to imagine this fowl statement:

"Take one more step on this gnome's trail, and I will blank you," said the corporate lawyer.

He also referred to a statement by protester-defendant Mia Nissen who was alleged to have uttered to an employee the following about the Texas-company's billionaire shareholder.

"You tell that dirty douche bag [Rich] Kinder this project won't be completed," Kaplan reported to the court.

Another hot topic in the court room was Kinder Morgan’s argument earlier this week that the protesters' snarls and facial expressions were a form of “assault” – a revelation that is now provoking online humour on social media, to the hashtag: #KMface

Gratl said the protester’s use of the megaphone to accentuate these expressions is one of many lawful “props” that citizens can use.

“I am not asking you to adjudicate global climate change,” Gratl told the judge, but the lawyer did want to put some context on the record to help explain why protesters are so frustrated with Kinder Morgan and the National Energy Board.

Entered into the court record was a description of the United Nations’ new IPCC 5th report on climate change with its warning of disastrous planetary effects, including the elimination of species, and glacier melts.

The lawyer said the effects are of such profound global importance, and of such personal importance to the protesters, that they need to be given full expression.

He said the protesters are particularly frustrated that the very regulatory body granted the power to authorize pipeline approvals – the National Energy Board – will not consider climate change evidence.

“That has lent itself to some frustration,” said Gratl, to some notable agreement from many in the court’s gallery.

Fundamentally, he argued, the right to express one’s view is central to what the court should consider when weighing Kinder Morgan’s application for an injunction aimed at the protesters.

He also walked the court through the environmental transgressions of Kinder Morgan, including its 2007 Burnaby oil spill, which affected a wide area in the Burrard Inlet, he said.

He then noted the company plead guilty for its role in the spill.  Protesters feel the company’s “lack of commitment to the environment” is a key motivation in their desire to express themselves.

He also highlighted the frustrations of Burnaby’s Mayor, who has complained of the difficulty his municipality has had in its dealings with Kinder Morgan.

All these factors, he said, have left protesters “entirely justifiable” in their frustrations.

He also pointed out how the proposed Trans Mountain pipeline expansion would result in serious environmental effects, including the building of one or two acres of new supertanker berths on the Burrard Inlet to facilitate the “water-based movement of sticky – what I like to call Tar Sands [oil].”

The RCMP made a brief statement to the court, updating that a man had been arrested Friday afternoon at Burnaby Mountain.  Video later provided to the Vancouver Observer showed the First Nations man getting angry at a constable over what he said was "unceded" Coast Salish territory near one of the company's bore hole sites.

The justice said he would rule on Kinder Morgan's injunction application no later than Nov.17th.  A 10am court time has already been set.

Outside the court hearing, a lawyer for BROKE (Burnaby Residents for Opposing Kinder Morgan Expansion) provided an important update.  He said that the City of Burnaby is intending to file a “stay” in federal court to the NEB’s recent decision that gives the company the right to do it survey work on Burnaby Mountain.