BC Premier Christy Clark has repeatedly promised the world's cleanest LNG industry. But what would that look like when the projects are underway? 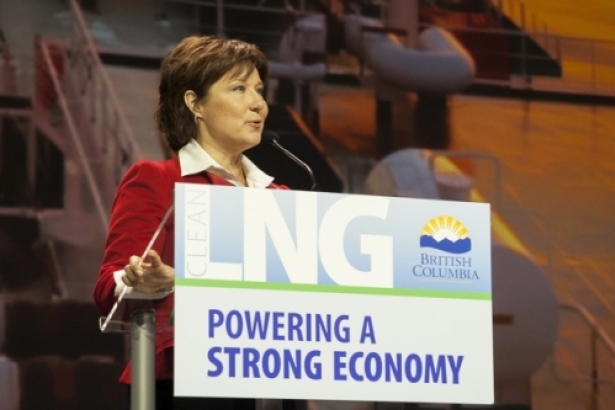 BC Premier Christy Clark at LNG conference in Vancouver this week. The Premier told conference participants that LNG is the "greenest fossil fuel" in the world, but studies paint a different picture. Photo by Mychaylo Prystupa.
While British Columbia's government and proponents of the liquefied natural gas industry are promoting the nascent industry as the cleanest in the world, the figures contained in export permit licences approved so far indicate the industry could produce emissions two-thirds those of Alberta's oil sands.

"If we don't ask all the (proponents) to reduce their carbon footprint of British Columbia with what they propose, we'll be nearly equal to the oil sands and that's unacceptable to the people of British Columbia," said Merran Smith, director of Clean Energy Canada at Tides Canada.

A dozen-plus plants are proposed for the province's coast. Gas would come primarily from the province's northeast. Some of it is bound for Oregon. Nine BC proposals have already been granted export permit licences by the National Energy Board and, along with pipeline proposals to move gas from the northeast's gas fields, are in various phases of the approvals process, including environmental assessments.
A September 2013 report from Clean Energy Canada said BC has promised the world's cleanest LNG industry. It's a drum Premier Christy Clark has thumped repeatedly.

What Clean Energy Canada found, though, in a study of two BC proposed plants and technologies is that emissions would be triple that of plants in Australia and Norway.

On March 11 , BC's Environmental Assessment Office ordered a comment period for the assessment of the BG Group's Prince Rupert LNG.

And what do the other plants export permits approve? Here's a list: