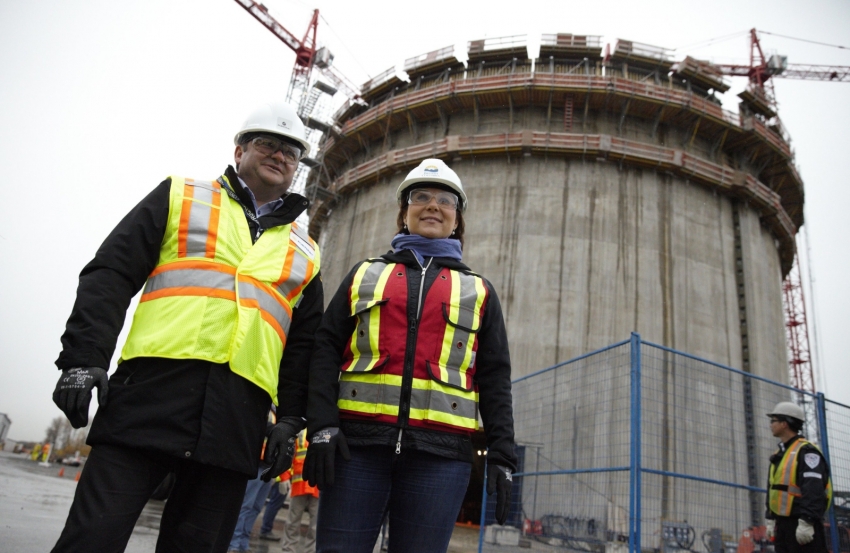 Premier Christy Clark signed the inside of a giant LNG plant under construction to ink not just her name, but also progress on the province’s beleaguered liquefied natural gas push in B.C., hard hit by low global natural gas prices.

The newly expanding FortisBC Tilbury LNG plant in Delta, B.C., will eventually be chilled to –173 Celcius, and filled with liquefied natural gas bound for domestic customers. The $400 million facility will store three to five million tonnes of LNG per year to fuel trucks, city buses, remote community generators and BC Ferries.

“It’s a dramatic expansion in capacity. It’s going to mean we’re able to meet the rising demand for clean energy in British Columbia, including BC Ferries not on filthy diesel fuel, but instead on clean liquefied natural gas produced here in British Columbia,”said Premier Clark at a Monday press conference in Delta.

But the hope is, the new Delta, B.C. holding tank – described as a “big thermos” by officials – might also supply export terminals to supply the fossil fuel to Asia.

One such export terminal proposed is in Tsawwassen First Nation on its industrial lands on the coast. Its location is ideal for a deep water port, said a band official.

Members will vote on Dec.16 if that plant is a good fit for the community and the environment. If members support it, it will proceed to a full environmental assessment by regulators.

Twenty-three-year-old Tsawwassen chief Bryce Williams called it a “very interesting” export project. But he wasn’t taking a strong stand on the project, and said he would let his band members decide its fate in the vote.

“I recognize all of the benefits that are coming out of this opportunity, so I look forward to what the membership has to say, and which direction they would like to pursue.”

“If it doesn’t go through, we’ll just see what other types of partners we could work with."

A third LNG plant is also proposed in the Lower Mainland – the WesPac export terminal jetty that would neighbour the Tilbury plant in Delta.

“There are 20 projects somewhere in the pipeline in British Columbia. Not all 20 will go ahead. And it may be that not all three of these will go ahead. But we know that some of them will,” said Clark.

And of the largest proposed terminals  – Petronas' Pacific North West LNG in the Prince Rupert area – has been dogged by First Nations opposition, and active protests on Lelu Island over concerns about salmon impacts.

Tilbury LNG's development, by contrast, has been supported by Tsawwassen First Nations leadership, and provided construction jobs this past year.

Delta mayor Lois Jackson was on hand for the premier’s tour of the Tilbury plant expansion, and expressed her excitement the work created so far  – some 450 trade workers, with 90 per cent living in the local area, she said.

“This project shows that these great jobs are available right here in Delta. From wire and cable distributors, to structural steel fabricators and installer, to welders and crane operators – this project has them all,” said Mayor Jackson.

The Tilbury LNG plant expansion began in October 2014.  FortisBC is the only company currently operating an LNG plant in B.C.  The old Delta LNG facility has been operating for 40 years.