A road map for the DTES. Rental-only zone promised, but the heart of Vancouver still faces a wave of gentrification during full-blown housing crisis. 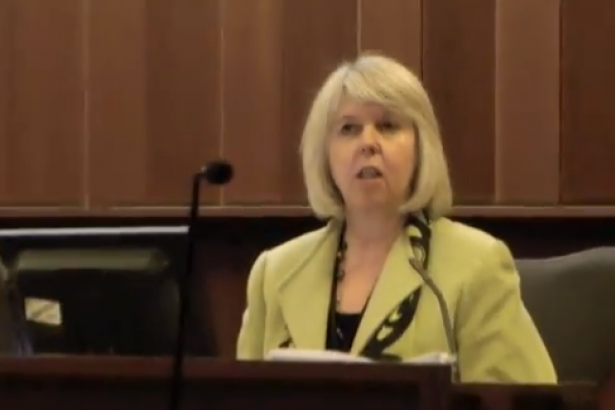 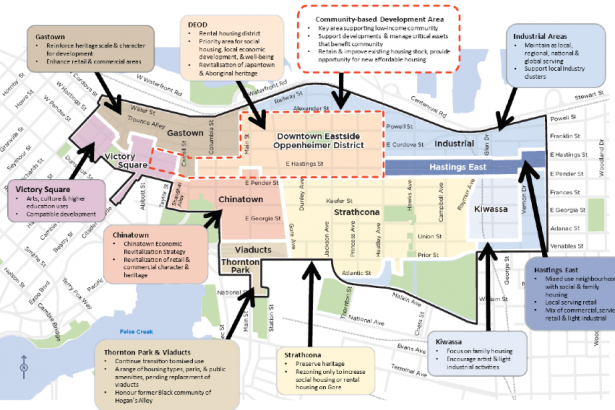 Urban plan or butcher's shop diagram? Depends on whom you ask. Clr. Adriane Carr said that social housing definition does not meet our real-life needs. (Still image via YouTube user digitalmonkblog; see below)

City Council has approved the highly controversial Downtown Eastside Local Area Plan, following three days of public debate. During the marathon Council sessions, over 140 people showed up to speak, nearly all of them drawing attention to the plan's conspicuously vague definition of "social housing."

The plan creates a rental-only, condo-free zone on Hastings between Carrall Street and Heatley Street. However, that doesn’t mean rental housing would have been affordable in real-world terms.

All other areas can be scaled up on a case-by-case basis, and extra height can be added if 2/3 of a building consists of social housing. This is not to be confused with “affordable housing”, for which Council did not enter this process with a clear definition.

Last month’s hearing saw “affordable housing” used to describe $1300/month one-bedroom apartments, with neither laughter nor tears coming from anywhere in the Council Chamber other than the public gallery.

According to the DTES Local Area Plan proposal, 60% of the 18,500 people living in the DTES are low-income residents with a median income of $13,700. That’s less than 11 months’ rent at what Council had been calling "social housing" rates, presuming they have absolutely no other expenses (such as food).

Vancouver is in a full-blown housing crisis, and the city's poorest have nowhere left to go.

Following the public-input stage, Clr. Andrea Reimer introduced an amendment to make social housing sound a bit more like... social housing. (The amendments, roughly 25 pages, are not yet online.)

In a sense, the Downtown Eastside Local Area Plan lays a blueprint for carving up the Eastern Core among developers. The current situation isn’t tenable either: anti-poverty activist Wendy Peterson described existing SROs as “crappy” when talking to the Vancouver Sun. SROs are not proper social housing: they’re low-end hotel rooms. Very, very low-end hotel rooms. Leaving the DTES as it is would not be a viable option.

Staff have also been directed to develop a strategy to find partners to help create an aboriginal health and wellness centre, as well as more specifically identify which parts of the DTES Local Area Plan require Provincial and Federal funds, which are conspicuous in their absence.

Mayor Gregor Robertson's website touts the inclusive nature of the three-year process, but speaker after speaker took to the podium to describe a very different scenario, in which low-income citizens were repeatedly frozen out of the planning stage.

Pete Fry, Chair of the Strathcona Residents Association, wrote, “We are extremely concerned that the over 450 pages of plan and associated reports have been released with less than two weeks to read and analyze before it goes to council. Ostensibly, we are being told the plan is essentially the same as earlier iterations with only minor technical details, although we note at least one major change in the form of a significant increase in the population projection for the area. As they say, the devil is in the details.”

Fry wrote that fears that DTES/Oppenehimer will be “ghettoized” by all this ostensibly-cheap housing are unfounded, since there won’t be as much cheap housing as media coverage has suggested: “We feel that the ‘upzoning’ being proposed will cause significant land lift and resultant speculation that will negatively impact retail and industrial diversity as well as social sustainability and liveabilty, and ironically the very ‘affordable housing’ it is proposing to protect.”

Clr. Adriane Carr wanted to send the whole shebang back to the Local Area Planning Process Committee to sort out a definition for social housing, but her motion was unsuccessful. She said that the social housing provisions "fell short" of what was needed to meet the stated goals of the DTES LAP.

Who is the DTES Local Area Plan for?

Robertson said that Council was stuck between senior government & community on the DTES issue. Some in the room yelled out, "... And developers!"