“The NEB (National Energy Board) has lost its way,” said David Martin, a lawyer representing the group of landowners, business people, and academics. 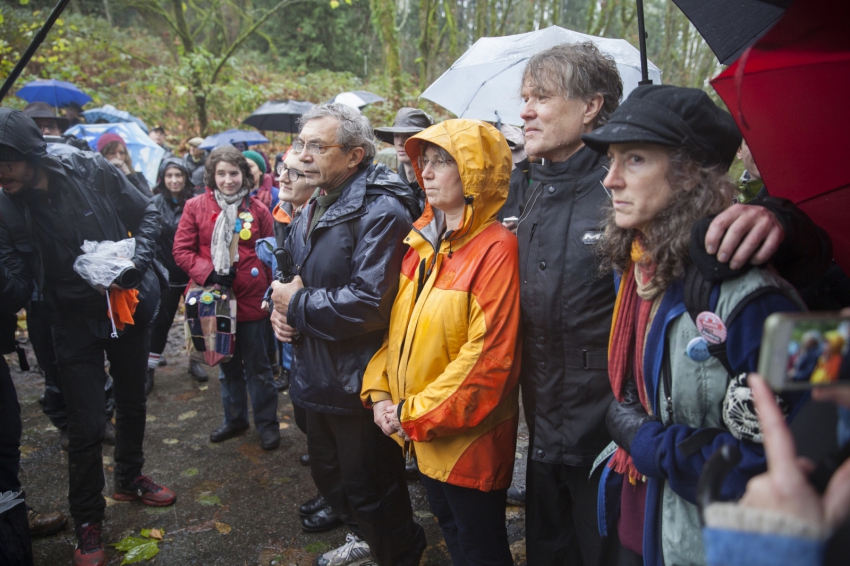 A group of concerned citizens has filed a constitutional challenge with Canada’s highest court today, frustrated with the National Energy Board’s review of the Kinder Morgan pipeline, a process they believe is fundamentally undemocratic.

“The NEB has lost its way,” said David Martin, a lawyer representing the group of landowners, business people, and academics.

In 2014 the NEB granted intervenor status to 400 applicants, while hundreds of other citizens were denied. The status allows those accepted to submit arguments and more fully participate with the hearings.

Mr. Martin believes that by denying applicants the right to have their voice heard, the NEB has infringed on their basic rights.

"It violates the Charter of Rights and Freedoms that guarantees freedom of expression,” he said in a phone interview.

The proposed $5.4-billion Trans Mountain expansion would twin the pipeline and triple the capacity for Alberta oil intended for Asian markets. The project has been at the centre of intense media and public scrutiny, with detractors fearing potential oil spills from both the pipeline and oil tankers, and proponents saying it will create jobs and bring in revenue for the province.

Martin believes that due to legislation enacted by the Conservative federal government several years ago, a healthy discussion is being stifled. And this is why they are going to court

Gutting of the NEB Act

In 2012 the federal government drastically changed the rules for participation in the review of industrial projects, like Kinder Morgan, by amending the NEB Act.

Before the changes, any interested group or citizen could voice their concerns regarding a pipeline or other project, but after the legislation was enacted, individuals could only participate if they were “directly affected” by a pipeline — or, had “relevant information or expertise.”

Critics believe this effectively gave the NEB too much power to decide who had “relevant” expertise. It allowed them to stifle anyone with concerns the board deemed irrelevant. Today, issues like CO2 emissions from oil sands development or the potential for oil tanker spills do not seem to constitute relevant information.

"The NEB doesn’t want to look at the upstream or downstream implications of this pipeline — and that’s wrong,” said Mr. Martin.

"There is essentially no meaningful environmental review anymore," she said.

This isn’t the first time the applicants have challenged the legality of the NEB’s review process, and its decision to limit participation.

In 2014 they filed two motions with the NEB which were subsequently dismissed later that year.

In a defence of their process, the NEB cited court cases where limits on expression were accepted, and were not in contravention with the Charter. In one example it stated:

"The freedom of expression contained in [The Charter of Rights and Freedoms] prohibits gags, but does not compel the distribution of megaphones." The implication being clear: not everyone gets a voice.

"The Applicants have not established that... the NEB Act or the Board’s actions in the Project hearing violate the Charter,” therefore, the NEB defence concludes, their requests have been “denied."

Not long after the NEB decision, the group filed papers with the Federal Court of Appeal (FCA).

In January of this year they were denied again, this time by the FCA. No reasons were provided for the denial.

Purpose of the NEB

In the documents filed with the Supreme Court of Canada (SCC), the applicants stated that the purpose of the NEB is historically one of promoting participation and discussion.

The board has a mandate to “ensure meaningful public participation in environmental assessments,” it reads, citing the Canadian Environmental Assessment Act.

The filing also describes other infrastructure projects where the NEB has been required to look at both upstream and downstream effects, such as when a hydroelectric line was being constructed in Quebec in the 1990’s.

In this case, the Board eventually determined that the project was not merely “a line of wire,” because it would “create an expanded network for distribution and result in environmental impacts upstream,” according to the documents.

If the NEB has taken into account upstream effects before, it’s possible that the SCC may decide they should again.

Since the 2012 amendments by the federal government, “public participation has plummeted — and with it the legitimacy of the review process,” the challenge document reads.

But if the SCC decides that applicants like Dr. Quarmby should have their day in court (a decision could take up to six months), Mr. Martin is hopeful that the NEB review will allow more voices to participate.

"Freedom of expression is the beating heart of democracy,” he said. “If legislation excludes the public from public hearings, then it defeats the entire purpose of this process.”

BC landowner "crushed" by NEB's stonewalling on Kinder Morgan expansion