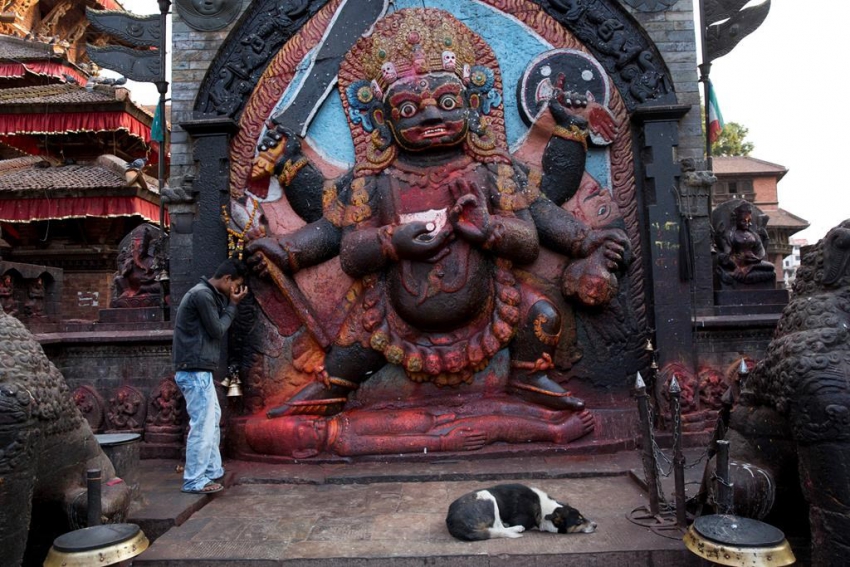 TORONTO — A Montreal woman stranded in Nepal by Saturday's magnitude 7.8 earthquake says there's chaos at the airport as foreigners try to leave the stricken country.

Emilie-Anne Leroux says she was in a taxi on the way to the airport to return to Canada to be with her father who is having heart surgery when the quake hit.

It felt like the car "had four flat tires at different moments," Leroux said Sunday, adding she thought it was car trouble until the driver stopped at an open area and let her out.

It was shaking so much that everyone was holding onto handrails at the side of the street "because we thought we could fall if we didn't hang on," she said.

Leroux, 28, was in Nepal working for the International Organization for Migration and says other Canadians she knows who were in the country have checked in to say they're safe.

Leroux, who is in Patan, said she's been told she can't get a flight out of Nepal until May 2, but adds she is lucky and has a number of places she can stay while she waits.

"It was complete chaos at the airport," Leroux said.

"Right now there is about a three kilometre queue of Indians who are standing literally nose to the back of the head" waiting for flights promised by India's government, she said.

"There's people camped out even on the grassy spots between the parking zones," she said.

The earthquake centred outside Kathmandu, the capital, was the worst to hit the South Asian nation in over 80 years and has left more than 2,500 dead.

Meanwhile, the family of an Ottawa woman who was trekking in Langtang National Park when the earthquake struck is desperate for any news of the 32-year-old.

Faye Kennedy's brother-in-law said they have not heard from her since the quake and have heard damage in the park was quite extensive.

"They said the shelter there, the tea houses, have been flattened, and this is where the trekkers are supposed to be staying" Justin Piche said Sunday.

The assessment team was part of the Disaster Assistance Response Team, known as DART. The military team is designed to deploy on short notice to deal with natural disasters or humanitarian emergencies.

CARE Canada, a non-profit disaster relief charity, said Sunday that emergency specialists from across the world — including a Canadian — were on their way to Nepal, adding that CARE also has over 150 staff already in Nepal.

Raphael Slawinski of Calgary was preparing to climb the northern Chinese side of Mount Everest when the earthquake struck.

"We were resting after a few days up in the mountains, just sort of resting in base camp having lunch when the ground began to sway and when the shaking was at the highest, it was actually hard to stand up," Slawinski said Sunday via satellite phone.

Slawinski said he felt two aftershocks shortly after the quake and a third on Sunday. He said the climb has been delayed indefinitely but he added he feels safe where his group is camped.

Rabi Chitrakar was jarred awake in Halifax, N.S., to news of the quake by an early-morning phone call from a concerned friend.

"It took me hours and hours to get a hold of my sisters and mother," said the Nepalese-Canadian, originally from Kathmandu.

He described the feeling of not knowing the status of his family as "really horrifying" but was eventually able to reach them and confirm they were safe.

Chitrakar said various chapters of the Non-Resident Nepalese Association of Canada were busy raising funds to help with the relief effort, soliciting donations directly and for the Canadian Red Cross.

Chitrakar, formerly a regional representative with the organization, estimated there are about 10,000 Nepalese-Canadians in Canada.

The Foreign Affairs Department has said there are 388 Canadians registered as being in Nepal, but cautioned that is only an estimate as registration is voluntary.

Among the Canadians in Nepal is former New Brunswick NDP leader Elizabeth Weir, who tweeted Sunday, "Sleeping outside for a second night because of possible quake. Inconvenient for us but this is life-shattering for so many Nepalis."