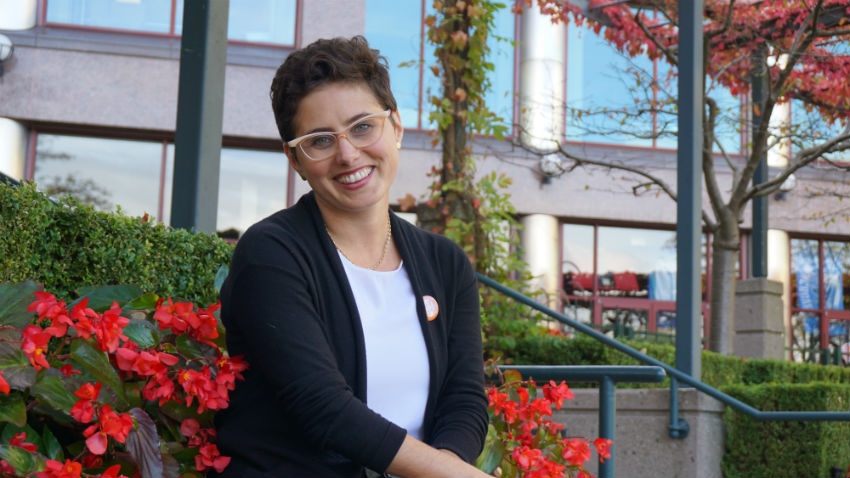 Mira Oreck gets straight to the point.

“If people want to get rid of Harper and see a change in government, which they overwhelmingly do, they should absolutely vote for Tom Mulcair and have a progressive federal government,” she tells me.

We’re sitting in a coffee shop in her riding Vancouver Granville, a brand new seat in Canada’s 2015 federal election. It runs north along West 2nd, 6th and 4th Avenues, south to Marine Drive, and from Main Street to Arbutus Street east to west.

Oreck has just returned from rallies Montreal and Toronto, but is full of energy despite her jet lag. We talk about her decision to run as a federal candidate and why she chose the NDP.

“I felt that this moment in Canada could not be watched from the outside,” she explains. “I’m a very big fan of Mulcair’s — I think he’s a strong leader, clear in his values with a platform that I think Canadians are ready for, so I couldn’t resist diving in and trying to represent the neighbourhood I grew up in.”

Oreck is a third-generation Vancouver Granville resident and lives in the riding with friends and family. She has a master's degree in urban policy from The New School in New York City, where she solidified her desire to dedicate herself to issues-based advocacy and voter engagement.

“I worked there for a neighbourhood rights advocacy organization called Make the Road New York and had the opportunity to work in the 2012 presidential election with the people I had been watching closely since 2008," she explains. "They run (an organization) called the Jewish Council for Education and Research and they had made a video with Sarah Silverman in 2008 called The Great Schlep and I really admired their work.”

Since then, Oreck has launched Feed Democracy, an initiative that helped Metro Vancouver restaurants encourage customers to vote in last year's municipal election, and directed the Broadbent Institute in B.C., which champions social change.

Oreck is also on the City of Vancouver Renters Advisory Committee, an alumni of the ROI Community of Global Jewish Innovators, and a former environmental advocate for Friends of the Earth in Washington, D.C.

Underlying all of her work, she says, is a desire to engage the community on "issues of concern."

"That's really been a big focus," says Oreck, "making sure voters are really aware of what’s happening in their country, the decisions that governments are making, and recognizing that they have a key role in shaping their country.”

If there has ever been a time for public involvement in an election — this is it, she insists. Canada is primed for real governmental change, all its citizens have to do is seize it.

"(This election) is not about sitting on the sidelines or having opinions from afar," she says firmly. “We will not get a progressive government that way. It won’t come magically — it's ours to take and to win if we work for it."

That said, Oreck believes her job leading up to Oct. 19 is to knock on as many doors as possible with her team and convince the riding that it's time for a federal NDP government.

She encourages one and all to volunteer in this endeavour, even if it's just for an hour or two. So far, her campaign has included voters from across the political spectrum many of whom have voted Conservative, Liberal, or Green in the past.

"I’m really humbled by the kinds of people who have chosen to come on board and who are giving immense amounts of time," she says with a smile. “It’s a really diverse riding and that to me is what’s most appealing about it.”

Oreck says Vancouver Granville is a "real slice of urban Vancouver," a riding with a little bit of everything: It has arts and culture, environmentalists, community-based organizations, local businesses, and more.

Given this mix, she says the most enlightening part of running for election has been hearing feedback from the constituents. Popular topics so far include dissatisfaction with recent Tory policies such as anti-terror Bill C-51 and controversial citizenship Bill C-24.

"You live in whatever world you’re in and think the issues you care about are the issues the public cares about, and it’s just been amazing to be at people’s doors," she explains. "What’s on their minds tends to be that they’re ready for change, they’re looking for a new leader, and when they look at the leaders that they get to choose from to replace Harper, they’re overwhelmingly looking at Mulcair.”

Oreck laughs at the irony: When she was 16 years old, she wanted to work for Canada Post and deliver mail from door to door. Her friends from summer camp used to send her letters and care packages, she explains, so she associated mail with good news and going door to door with outdoor exercise.

Today, she's living out this dream in a slightly different capacity. She's still going door to door to deliver good news, but the message is a little different:  "I think we’re really sitting on a moment of significant change in Canada," she says with a smile. "My goal is to see an NDP government. I think it’s what Canadians are ready for, and I think it’s what Vancouver Granville deserves.”