Banning big donations would restore faith and public confidence in the decision-making at the council table, says Adriane Carr. 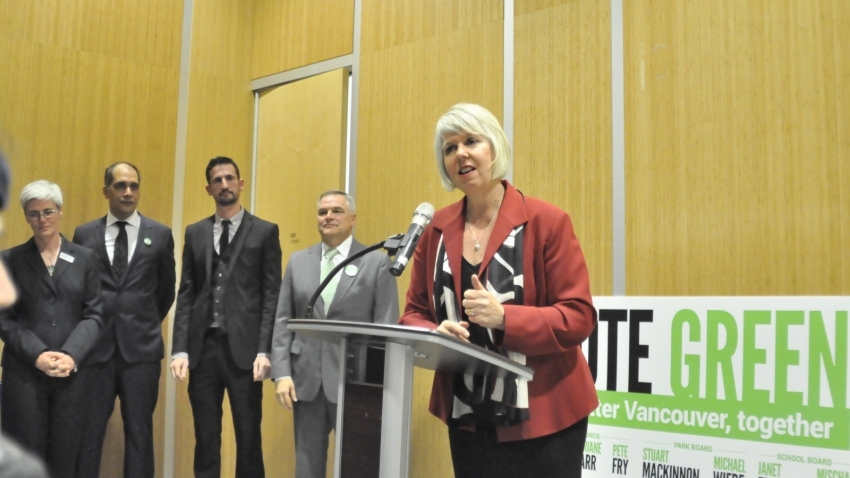 The lone Green city councillor has pushed for capping election spending in the interest of fairness to candidates from parties with less money.

City councillor Adriane Carr brought forward the motion to bring in concrete campaign expense restrictions at today’s city council meeting. Council instead referred Adriane Carr's motion to a group of city staff that was tasked at the February 3, 2015 council meeting to conduct a review of the 2014 civic election.

“Too many times I’ve sat at the table making decisions around development issues where every development issue gets passed and the people who come to speak raise the concern that they believe that council is in the pocket of developers," she told the Vancouver Observer before the council meeting.

"When you have citizens coming and saying those kinds of things, it’s a huge cause for concern,” she added.

While all were in favour of expense reform, city council appeared unable to agree on the route to take towards it. As a result, instead of moving forward to hear from speakers tomorrow, the majority voted in favour of amending the motion and referred the issue back to city staff conducting a review of the 2014 civic election.

On June 26, a bi-partisan Special Committee of the B.C. Legislature issued a report with recommended spending limits for local election campaigns.The report stated a desire to “create a level playing field” and suggested that “expense limits restrict the ability of candidates and their third party advertisers with significant resources to ‘drown out’ the voices of other candidates with fewer resources.”

However, Carr’s motion was in response to this report as it failed to meet concerns brought forward by Council in spite of its stated intentions. For example, the committee recommended a per-capita spending allowance, giving elector organizations the ability to spend up to $2.9 million in campaign costs — an amount higher than the $2.2 million spent in 2011 that caused initial concern.

As a result, Carr proposed a per-elector spending limit and the ability for the City of Vancouver to set lower spending limits than those set by the province. She also motioned for monitoring of spending between elections and a donation limit of $5,000 per Canadian individual to all candidates combined, thereby eliminating corporate, developer, foreign and union donors.

“If there’s not a confidence in the impartiality and fair judgment of councillors around any decisions, you know you really have a decline in democracy,” she said. “That’s why I think the requirement that there be no corporate donations, including developer donations, no union donations, no donations from individuals who live outside of Canada, is incredibly important to restore faith and public confidence in the decision-making at the council table.” 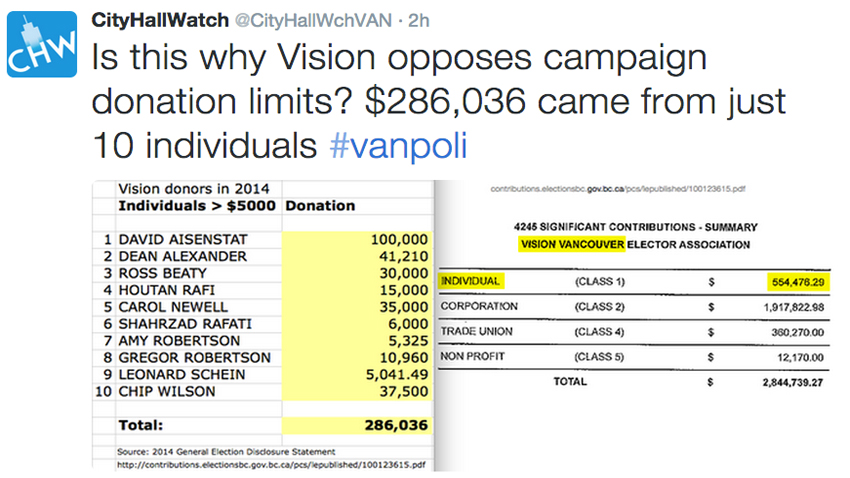 Above: A screen shot of a list of major donors was quickly posted by @CityHallWchVan following Tuesday's meeting.

Councillors Carr, Affleck and De Genova all expressed concerns about missing the opportunity to hear from speakers on the subject.

“I think that this hinders the democratic process not allowing the speakers who have been informed and expect to be able to speak to Carr’s motion tomorrow to be able to do that,” said Coun. De Genova.

“I think that this is something that we’d all like to move forward towards, however I am concerned that I am seeing patterns of referrals.”