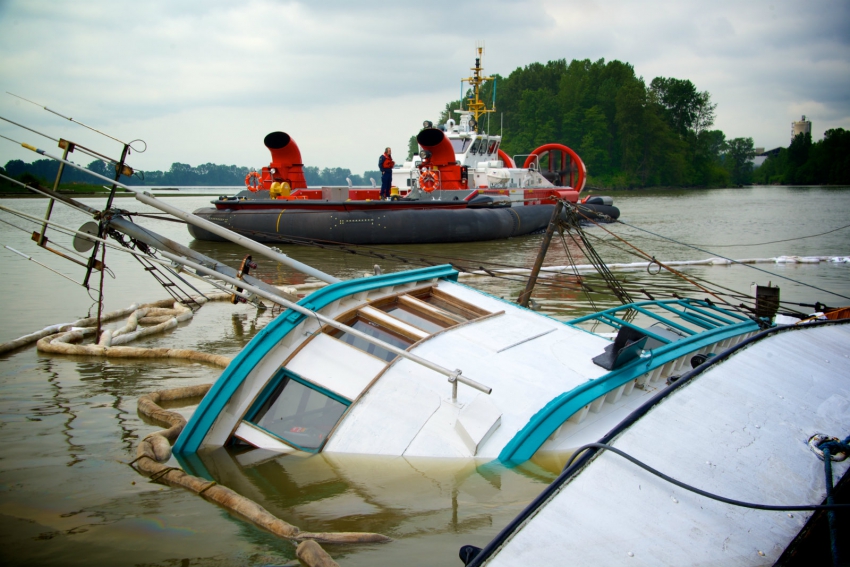 The Western Crusader takes on water as the Coast Guard looks on photo credit: Danny Kresnyak

Early Tuesday, a fishing boat called The Western Crusader capsized while moored at Shelter Island Marina on the Fraser River near Annacis Island in South Vancouver.

Although officials say no one was injured, the boat is leaking fuel into the river.

The Western Crusader's owner, Ronnie Gibbs a resident of Sooke, told reporters the boat's dual 1,500 gallon diesel tanks were emptied in preparation for inspection after being towed to the Marina from Campbell River.

He said the ship had only "20 gallons" of fuel and hydraulic fluid left in the tanks. 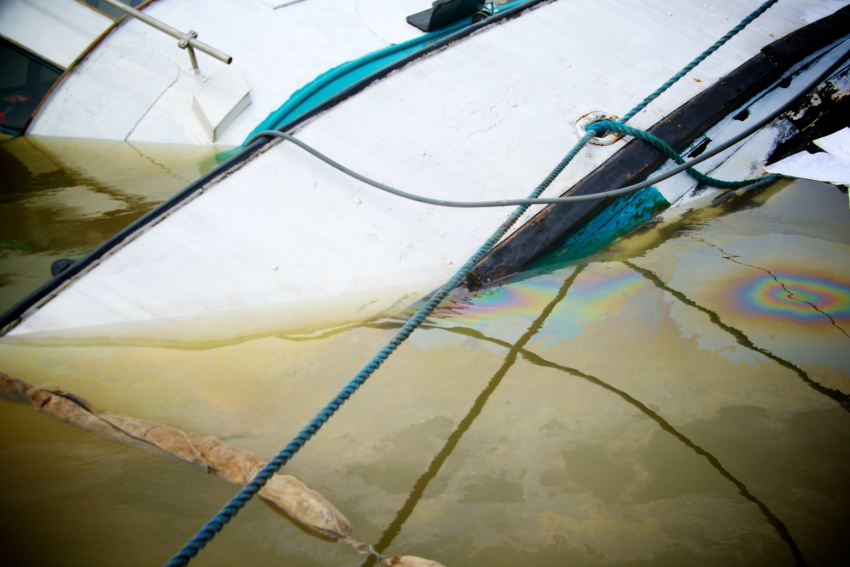 An oil sheen on the water around the Western Crusader. The Vessel is circled with two absorbent booms, one from owner Gibbs and one from the coast guard photo: Danny Kresnyak

Gibbs said everything was fine when he and his girlfriend went to bed around 10 p.m.

The pair were asleep on board when they were shaken awake by "gurgling pipes and stuff knocking" around 4:30 a.m.

Gibbs checked the downstairs engine room and found it flooded with water up to the entry-way. They decided to abandon ship, leaping to a neighbouring boat as the Crusader tipped over on its side.

"We jumped onto this old barge," said Gibbs. "It just keeled over so hard that by 5, we were sunk"

The Coast Guard responded within two hours of Gibbs' call, the boat's perimeter was wrapped in an absorbent boom with assistance from Gibbs and marina staff.

The coast guard faced sharp criticism last month after its delayed response to a bunker fuel spill in English Bay, mainly due to the federal government's 2013 decision to close the Kitsilano coast guard station.

The DFO has yet to release a statement about today's incident. But response specialists on site told the Vancouver Observer the spill was "a lot of media for not much spill" while they dropped absorbent pads into the water.

As of 12 p.m. Tuesday, the 187 ton, 103 foot long, 23 foot wide, 72 year old wooden Western Crusader lay on its side sunk in the 17 foot deep waters of the marina. Next it will be righted by crane and loaded on to a barge before being dry docked for inspection.

Owner Gibbs, a logger and beachcomber who lived on board, said he does not have insurance but has paid the $20,000 cost of removing the boat from its current resting place.

A sheen of oil was visible in the water and unidentified chemical smell lingered in the air around the boat. Reports have stated a fuel trail extends to Massey Tunnel.