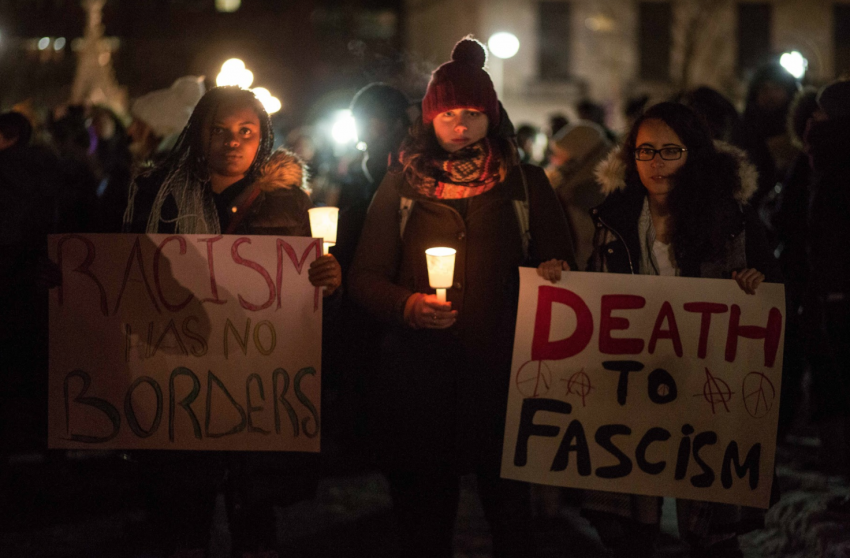 Mourners attend a vigil for the victims of a deadly shooting at a Quebec mosque, held in Ottawa on Mon. Jan. 30, 2017. Photo by Alex Tétreault.

A deadly attack on a Quebec City mosque is a "harsh reminder" of the reality of Islamophobia, and citizens and politicians need to talk more openly about racism in Canadian society, legal advocacy groups say.

Hasan Alam, a community liaison for the Islamophobia Legal Assistance Hotline, said Canadians often feel that race or faith-based discrimination are taboo topics and they should stick to the language of "diversity and multiculturalism."

"But I think we need to start pushing the envelope and being comfortable talking about things such as racism and Islamophobia and xenophobia, to name a few things, in a more open and public manner," he told a news conference Tuesday.

Alam said a range of legal groups in British Columbia started the hotline last March after the National Council of Canadian Muslims reported a significant increase in Islamophobic incidents. The hotline gives people targeted by Islamophobia access to free legal advice in multiple languages and across a number of legal fields including immigration, employment and human rights law.

He said the reasons for the rise in Islamophobia are complex and many, but during the last federal election a "divisive form of Islamophobic rhetoric" was used to single out Muslims as a threat, including the so-called "barbaric cultural practices" tipline floated by the Conservatives.

Now, Canadians are being exposed to a more extreme form of this rhetoric from the U.S, he said.

Alam said although he can't speak to a direct correlation, politicians need to be aware their statements can inspire or provide "tacit approval" of heinous acts.

"I think they should take their words very seriously. I think the public at large takes cue from those who hold power," he said.

The hotline also confidentially records incidents of Islamophobia in Canada, he said. While statistics are not yet available, Alam said the line has received numerous calls about hateful comments and attacks, including a recent incident in which he said a woman's hijab was ripped off in Vancouver. He would not share further details of the alleged incident.

Vancouver police said it has not seen an increase in reports related to faith-based incidents, and it was unable to locate a report of a woman's hijab being ripped off without additional information, such as the date or location.

The B.C. Civil Liberties Association and the Federation of Asian Canadian Lawyers are among the legal groups that launched the hotline.

Laura Track, a lawyer with the civil liberties association, said her organization is joining others who have called for the federal government to suspend its safe third country agreement with the U.S. that allows Canada to turn away most refugee claimants who cross through the American border.

She said the agreement is based on the premise that the U.S. is a safe country in which refugees can make asylum claims. But she said that premise has been undermined after Trump's executive order indefinitely barred Syrian refugees and suspended all refugee admissions for at least 120 days.

The U.S. government said Tuesday that it would accept 872 refugees this week because they were ready for travel and stopping them would cause "undue hardship."

When asked about the safe third country agreement, Immigration Minister Ahmed Hussen said the situation in the U.S. is "fast-changing."

Lorne Waldman of the Canadian Association of Refugee Lawyers said the executive order left thousands of people in limbo, including refugees that have gone through exhaustive security screenings in order to resettle in the U.S.

His organization wants Canada to seek an urgent meeting with the United Nations so it can co-ordinate a global response to assist people who have been displaced.