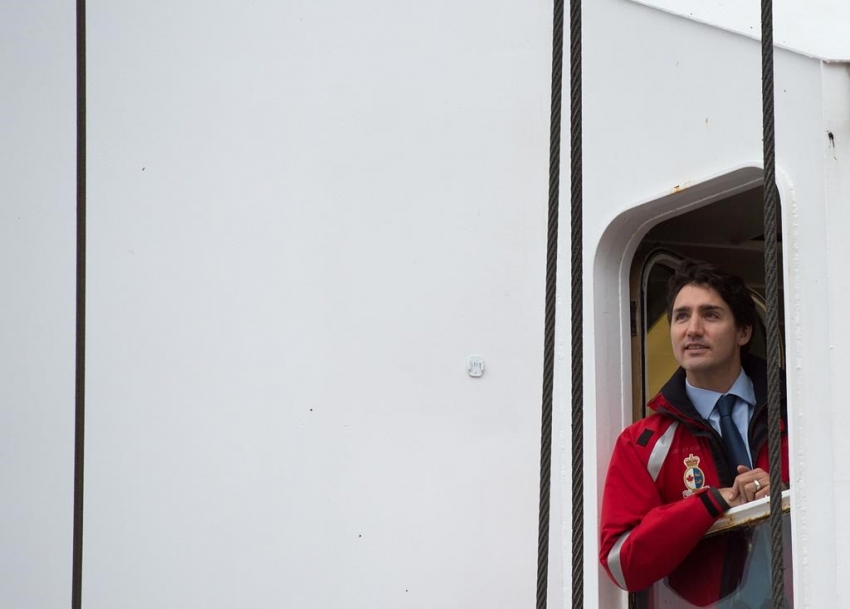 The money will be spent over five years starting in 2017-18 and includes funding to create a marine safety system, restoring marine ecosystems, and using new methods and research to clean up oil spills. The government says change will be seen as early as next year, such as opening a Maritime Rescue Sub-Centre in St. John’s, N.L.

Trudeau said the funding will strengthen the Canadian Coast Guard, get tough on pollution from industry, fund coastal habitat restoration and create new legislation to increase responsibility for vessel owners.

The announcement comes just a day after a barge flipped and sank not far from the site on British Columbia's central coast where a tug ran aground last month, spilling more than 100,000 litres of diesel fuel from its tanks.

"The ongoing incident at Bella Bella is unacceptable. I know this, you know this, Canadians know this," said Trudeau, who made the announcement in Vancouver's Stanley Park, right next to the Burrard Inlet.

"It's time for a change. As a community we need to protect our magnificent oceans and reopening the Kitsilano Coast Guard base was an important first step."

Trudeau said the coast guard station was a down payment on a much larger plan.

"We must make sure we protect all of our coast lines, not just the ones we're on right now."

The prime minister says because Canada has the longest coastline in the world, it's vital to have a plan to ensure protection in modern and advanced ways.

The announcement also sets the stage for the possible approval of the $6.8-billion Trans Mountain pipeline expansion. Trudeau's government is expected to announce a decision on the project by Dec. 19.

The Trans Mountain pipeline expansion would triple the bitumen-carrying capacity of the pipeline from near Edmonton to Burnaby, B.C., and increase the number of tankers leaving Vancouver-area waters seven-fold.

The B.C. and federal governments have been in talks to develop a West Coast marine spill response system for much of the past year.

B.C. Premier Christy Clark told her supporters Sunday that the province has been "cheated" by the federal government when it comes to spill response, adding that she believes Trudeau can be the one to change the "historical wrong."

She has long insisted that her government would not allow a heavy oil pipeline to be built in the province unless five conditions were met, including a "world-leading" spill response regime.

Trudeau said the federal government looked extensively at what a world-class system would look like, citing Norway and Alaska as examples.

"We know what we need to do to protect these coasts and make sure that, in responsiveness to incidents but also being proactive and grounded in strong science, we're doing everything right."

The decision to reopen a search and rescue sub-centre in St. John's was welcomed by a union representing workers in the fishing industry on the East Coast.

"The previous federal government attempted to cut costs and balance the books at the expense of marine safety," said Keith Sullivan, president of the Fish, Food and Allied Workers Union.

Sullivan said the sub-centre would provide an effective response to vessels in distress on the Atlantic, in addition to lifeboat stations in Twillingate, Bay de Verde and St. Anthony in Newfoundland and Labrador.