Campaign to stop Trump from inside Canada

Avaaz stages rally at Trump Tower, releases tool making registering to vote easier than ever for majority of expats who don't vote 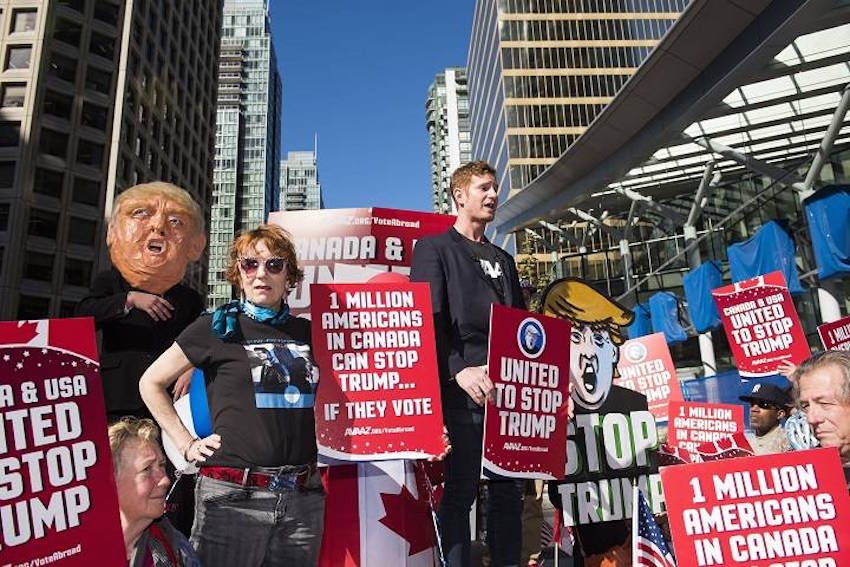 Avaaz organized a rally in front of the new Trump Tower in downtown Vancouver to launch a major new campaign to mobilize American expats across Canada to register and vote, in Vancouver, B.C. on October 5, 2016. Photo by Jimmy Jeong/The Canadian Press.

Global citizen movement Avaaz will gather expats and Canadians today with a 'Stop Trump' launch event outside the new Trump Tower in downtown Vancouver. Canada, alongside Mexico, hosts the largest concentration of Americans outside the US, and many don’t vote.

At today’s event organizers have invited Americans living in Vancouver to register to vote with Avaaz’s new registration tool. A truck covered in 'Stop Trump' banners and American flags will be equipped with iPads and voting booths, and will also give Canadians a way to share the tool with all their American friends living outside the US.

Some 8 million US citizens live abroad, but until now the vast majority of them have not voted -- only 12% voted in 2012.  There are up to a million Americans live in Canada, according to estimates from the IRS. This massive untapped voting bloc could decide the US presidency, according to a recent report from Oxford University.

Emma Ruby-Sachs, Deputy Director of Avaaz, said: “Americans living abroad are the secret swing state that could tip this year’s election. For months, the world has sat on the sidelines, horrified by Trump’s hate. Now, Canadians have a way to fight back - by inspiring the one million Americans living in Canada to register and vote.”

The most common reason Americans abroad fail to vote is because they miss state voting registration deadlines, according to a recent survey by the U.S. Vote Foundation.

The tool Avaaz has launched makes it easier than ever to vote by optimizing the user experience, and removing unrequired fields and extraneous interfaces. The tool is also optimized for mobile use, and allows users who are too busy to register right away and to sign up for reminders that encourage them to complete the process.

Canada saw 3,272 people turnout in the overseas Democratic primary, which was a fraction of the eligible voting bloc in the country. Right now the election polls are tight, and a critical mass of votes from Americans living overseas could be enough to tip the election away from Trump. In 2000, delayed overseas ballots gave George W. Bush a narrow 537-vote lead when the Florida recount was stopped by the Supreme Court.

The Avaaz campaign is targeting countries where the most Americans live, including Mexico, Canada, the UK, Germany, France, Israel, and the Philippines.