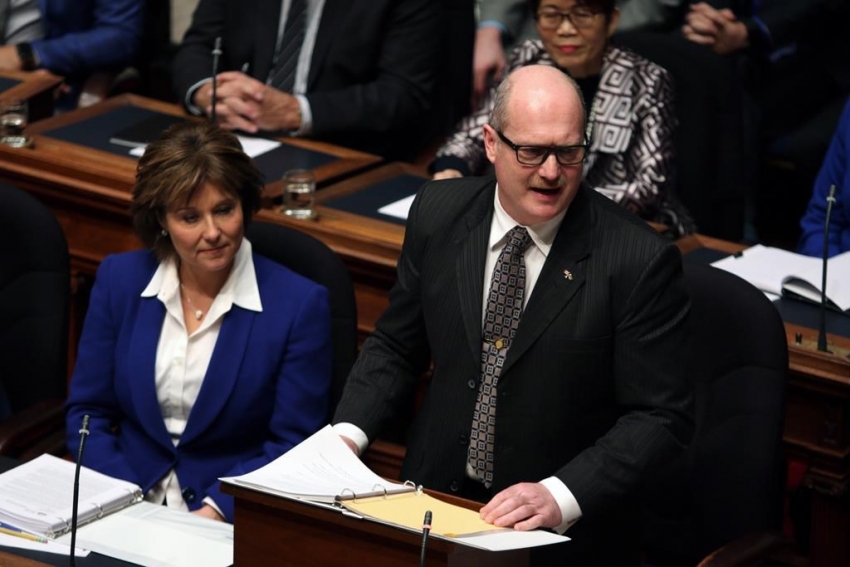 British Columbia's government is staking its re-election on a nearly $1 billion cut in medical service premiums, a small business tax reduction and carefully targeted spending increases on education, health and child welfare in a 2017-18 budget that projects a fifth consecutive surplus.

Finance Minister Mike de Jong said Tuesday the government will move to eliminate unpopular medical service plan premiums, starting with a 50-per-cent cut next year that will see a family earning up to $120,000 annually saving up to $900 in 2018.

Last week, the government announced it was in the financial position to pay back British Columbians after years of penny pinching, and de Jong says it identified the medical premiums as having the greatest impact for families.

"The instrument, mechanism we have chosen is MSP premiums," said de Jong. "We are instituting a dramatic cut in premiums as part of a strategy to ultimately eliminate them."

John Horgan, leader of B.C.'s Opposition New Democrats, said the Liberals mocked the NDP for proposed changes to the plan to ease the burden of constant premium rate hikes.

"They laughed at us and they've doubled it and they are going to reduce it by half next January," he said. "That's a government that over promised and will always under deliver."

"A significant number of British Columbians remain very troubled by the fact we have this charge, this MSP premium, that doesn't exist elsewhere in the country," de Jong said.

The premium brings about $2.5 billion in annual revenues. The cut, effective Jan. 1, 2018, reduces that amount by about $1 billion, de Jong said.

"We're tickled pink," said Jordan Bateman of the B.C. taxpayers' federation. "This is the only tax in B.C. that kept going up year after year, 40 per cent over six years."

Economist Iglika Ivanova of the centre for policy alternatives said she's concerned the government gave up almost $1 billion in revenues by cutting the premium. The government could have explored tax increases for corporations and high-income earners to recover the revenue, she said.

De Jong did not side step the importance the budget will play in the May 9 election. The Liberals have been in power since 2001.

"In a few short months, British Columbians will convene an electoral shareholders' meeting to consider not just the merits of this budget, but the progress we have made as a province," he said in his speech to the legislature.

Horgan said the budget is the government's attempt to make voters forget about 16 years of fee and rate hikes and education and social welfare budget cuts.

The 2017-18 budget also cuts the small business income tax rate to two per cent from 2.5 per cent and eliminates the provincial sales tax on electricity for business by 2019-20.

The $50.2-billion budget forecasts a surplus of $295 million, down from the $1.5-billion surplus forecast for the current fiscal year ending March 31.

The budget includes spending increases in areas where the government has weathered political controversy: education, housing and child welfare.

De Jong said the Children and Family Development Ministry will receive a budget boost of $287 million over three years to support children, youth and their families. He said $120 million will go toward child welfare issues for indigenous children.

Grand Chief Ed John recently called for more supports for indigenous families in a report to the government. The suicide of a Metis teen who spent his last days alone in a hotel while in government care also prompted calls for child welfare reforms.

"This is a start," said Bernard Richard, B.C.'s representative for children and youth. "There are very many vulnerable children out there who require help immediately."

The $287 million is part of $796 million in programs for families and children in need, de Jong said.

He said the budget also moves to address last year's Supreme Court of Canada ruling that requires the government to address shortages in teachers and classroom assistants.

The budget includes $320 million over three years to work towards a final agreement with the B.C. Teachers' Federation on class size and the number of children with special needs in classrooms. The teachers' union has said it could cost up to $300 million annually to address the court decision.

The total increase in the education budget is $740 million.

De Jong said the budget raises the threshold from $475,000 to $500,000 on a program to help first-time homebuyers with the property transfer tax. The increased threshold saves first-time buyers up to $8,000.

He said the Ministry of Health will get a budget increase of $4.2 billion over three years, which includes $100 million to fund youth mental health and substance abuse issues.

De Jong said B.C. is leading Canada in job creation and is expected to challenge Ontario, Alberta and Manitoba for the top performing provincial economy. The government is forecasting economic growth to hit 2.1 per cent in 2017.

While many Canadian governments fight deficits, B.C. is posting surpluses.