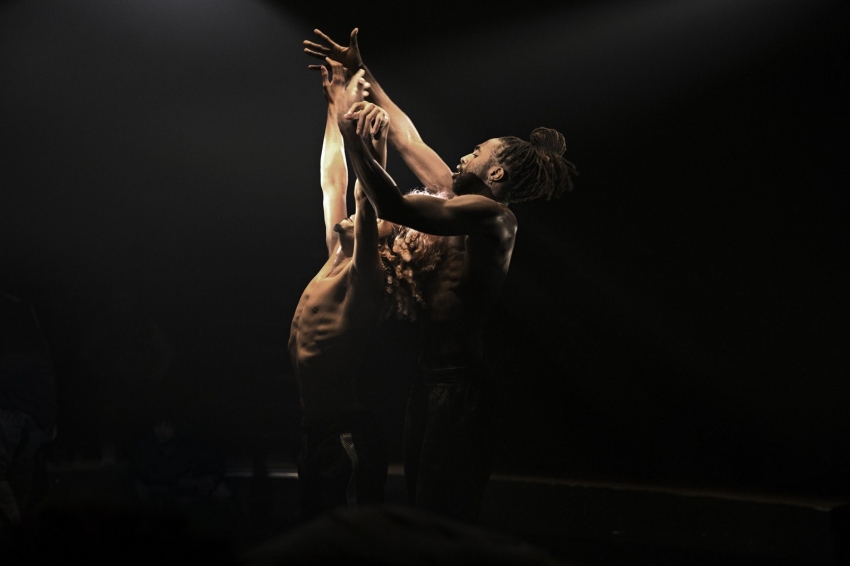 The playbill for the Dance House presentation of the Companhia Urbana de Dança listed just two items on the program: the darkling ID: Entidades (Entities) and the festive Na Pista (On the Dance Floor).

But then the Companhia and the packed opening night crowd at the Vancouver Playhouse collaborated on a third, spontaneous, unscheduled encore: the Ovação de Pé (Standing Ovation). It lasted fully 20+ minutes. The audience couldn’t help itself, the performers were just that irresistibly engaging.

For the curtain call, while the rest of the nine-member troupe cavorted about in a frenzied ring, each dancer took a turn perched on a chair at centre stage performing some signature tour de force – whirligigs, handsprings, triple-jointed breakdowns. To the untutored North American eye, all these capers were simply marvels of gravity defiance; we could only clap along in our best attempts at samba cadence.

But to Rio’s underclass urbanites, each stunt was the signature move of a characteristic street dance style, originating in some particular favela (squatter housing district). The bio’s in the program notes meticulously list each dancer’s slum of origin.

As it happened, the slums were having a hard time of it back home the week the Companhia came to Vancouver. The duly elected Workers’ Party government, champions of the favelas, came under concerted attack by what our North American press euphemistically termed “forces of the centre-right.” Demo’s and counter-demo’s swirled through the plazas and beaches of Rio. Brazil’s class war had come to a boil.

As a class-traitor in that ongoing war, Sonia Destri Lie, the Companhia’s co-founder, has spent the last decade fraternizing with the enemy. Raised in a solidly middle class family – “ballet lessons, five o’clock tea” – she stayed the bourgeois course right through University (psychology degree). But then, during her self-exploratory “gap” interlude as a touring performer in Europe, she discovered hip-hop.

Determined to meld such vernacular choreography with Brazil’s own rich vocabulary of street dance, she returned to Rio to scour the favelas for talent. “It drove me crazy, at first,” she recalled in a pre-performance talk. “I’d just come back from years in Germany, after all; how was it that these Rio guys couldn’t even be on time for a rehearsal?”

It wasn’t long, though, before she figured out that what she was mainly looking for wasn’t punctuality, nor even dazzling dance moves. “Dance, I can always teach,” she said. But no-one could impart the traits most essential to the troupe: personal charisma and esprit de corps. These qualities shone through brilliantly in the opening number, ID: Entidades, which showcased each member’s individual style before braiding them all into turbo-charged ensemble pieces.

Dreadlocked wizard André Feijão – the biggest, blackest Companhia veteran – led off, stripped to the waist, undulating across the bare stage like a hooded cobra. The long silence – the first of many incorporated into composer Rodrigo Marçal’s musical score – only enhanced the sense of mystery. So did lighting designer Renato Machado’s muted, sidelong illumination, which picked out only the dancers’ upper torsos, leaving the legs to swim unseen in shadow and stage smoke.

Gradually the smoke rises, the frontal fill lights kick in, more dancers take to the stage and the music picks up in a percussive sputter of variegated rhythms, all undergirded by a few metronomically repetitive melodic fragments. The mood shifts from underwater gloom to a favela dance club.

That’s not exactly a hedonic cabaret, however; more like the edgy tension of a cockfight arena. Dancers square off in duelling pairs, circling and glowering and vying to outdo each others’ jerks, snaps and twitches. The competition, though, soon veers into mutual imitation and then collaboration as the troupe – often led by “choreographic assistant” and dance coach Miguel Fernandes – coalesced into sparkling constellations of ecstatic, acrobatic group dance.

The piece, Destri Lie pointed out in her pre-performance talk, was originally conceived, at its 2009 premiere, as a paean to Companhia solidarity and a tribute to an early troupe member who had “fallen.” After the sombre undertone of ID: Entidades, everybody felt they needed “a little relief – a party.” Hence the frolic of Na Pista.

Visually, the two halves of the program couldn’t be more different. In contrast to the bare, black stage of Entidades, the set for Na Pista is a klieg-lit clutter of spotlights and speakers, with a mirrored disco-ball spinning overhead and a random collection of chairs arrayed at centre stage. Before the intermission, the dancers all wore just black pantaloons and tee-shirts; now they come out in a gaudy assortment of zoot suits.

They strut and preen, joking and jiving in Portuguese until Fernandes commands “DJ, music please” and, to the jangling, jouncing strains of Marçal’s score, they strike up a game of musical chairs. They’re down to the last chair when the troupe’s first – and so far only – female member, Jessica Nascimento bounds in from the wings to trump them all.

She remains the focal point for most of Na Pista – the cassus belli for the dancing duels, the sweetly seductive partner for many a smouldering pas de deux,  the high impact cue ball that scatters each tightly racked ensemble formation. At age 23, she’s the youngest dancer in the ensemble, but earned her Ovação along with the best and most seasoned of them. Let’s hope she and the Companhia return to Vancouver for many an ovation to come.