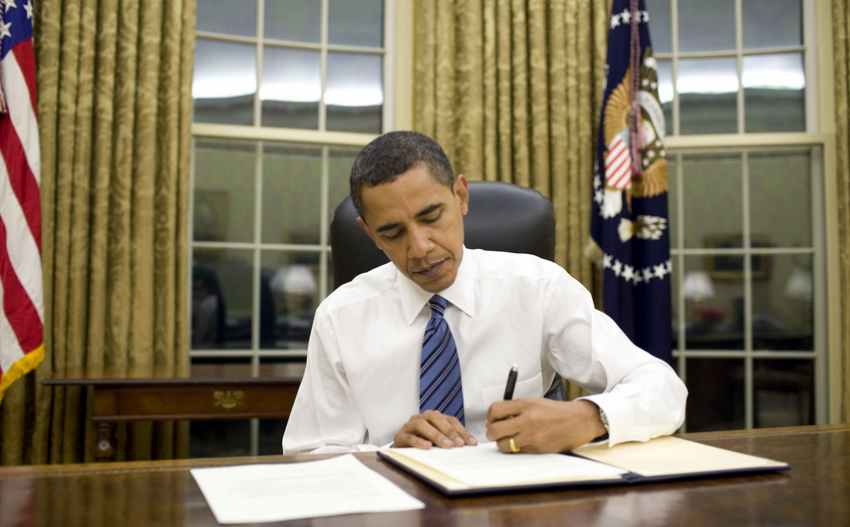 U.S. President Barack Obama has just vetoed the Keystone XL pipeline bill. The controversial pipeline, proposed by Calgary-based pipeline company TransCanada, won broad support from the Republican-controlled Congress, but has been strongly opposed by environmentalists and citizens due to environmental concerns.

Prime Minister Stephen Harper, as well as a number of federal and provincial leaders, have lobbied heavily for the pipeline in the past. Feds spent $24 million on a recent ad campaign to promote the project, and the Alberta government placed a $30,000 ad in The New York Times pitching the pipeline in 2013.

Climate scientists, as well as Nobel prize laureates, spoke against the pipeline on grounds that it would lead to further expansion of Alberta's oil sands, and 'lock in' 30 more years of fossil fuel infrastructure at a time of increasing climate change threat.

Some have pointed to Harper as a main reason for the long delays faced by Keystone XL. In a story in Bloomberg titled "No Keystone XL? Blame Canada", writer Christopher Flavelle argued that Harper's heavy-handed lobbying for the pipeline hurt the Keystone XL cause.

Harper also pulled Canada out of the Kyoto protocol in 2011 and introduced omnibus bills that dismantled many environmental regulations in 2012 at a time when the U.S. was evaluating the project's environmental impact.

A story in the Huffington Post by Sandy Garossino details:

"And how did things go so badly that Canada doesn't have the heft or goodwill in Washington to add a single pipeline to a nation benoodled with them? The answer lies in the delusional hubris of Stephen Harper."

"No close watcher of the president should be surprised. In myriad ways, the prime minister's personal ambition shredded our nation's single most important relationship and drew us into the toxic swamp of Washington's poisonous politics."

Environmental groups were thrilled with the announcement.

" As the President himself has argued, Keystone XL would worsen climate change, threaten the safety of farmers and landowners in America’s heartland, and create essentially no long-term jobs—all so a Canadian oil company gets to ship dirty tar sands to the rest of the world," said 350.org Executive Director May Boeve.

"Now, it’s time for the President to show he’s serious about his climate legacy by moving on to step two: rejecting this pipeline once and for all.”

More to come. A comment from TransCanada is pending.