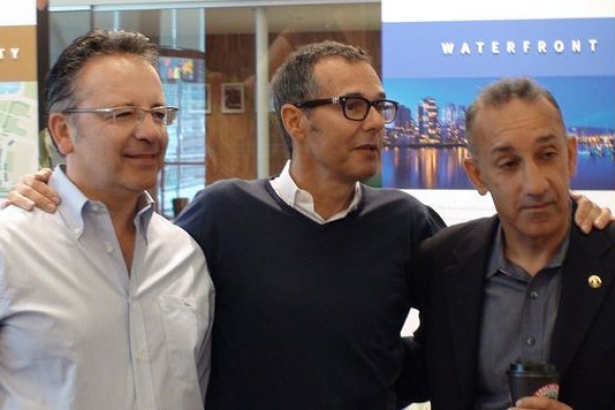 In a city expected to grow by almost 40,000 people in the next 15 years, the real estate marketing master behind many of the city's iconic residential properties says it's the city's prosperous baby boomers who will have the greatest future impact on residential development.

“The pattern that we should all be watching is the movement of this wealth by the living which may be more important than the transfer of wealth by the dead,” said Bob Rennie, of Rennie Marketing Systems.

Rennie's speech at the UDI's annual meeting at the Hyatt Regency on Thursday drew a crowd of almost a thousand people, keen to learn Rennie's usually 'spot-on' marketing insights and perceptions of what to look for in the real estate market, how to adapt to those changes, and how best to prosper.

“Greater Vancouver is projected to grow to a population of over three million in the next 15 years,” Rennie told the sold-out crowd in the Hyatt’s largest ballroom. “We will also see Greater Vancouver’s population that is aged 75 years and older increase by 85 per cent in the next 15 years.They are downsizing, yes, but downsizing to space and luxury. It doesn't matter what they sell their current homes for...as long as the developers in this room start designing and building homes that this demographic is looking for."

In his 11th year addressing the Urban Development Institute, Pacific, (UDI) Rennie relied on his long career in the greater Vancouver real estate market, his remarkably updated analysis of market patterns and his ‘in-house’ surveys of the buyers in that market to deliver a speech that drilled down into the regional home-buying demographic.

“Preparing for today really reinforced the need for current data,” Rennie told the crowd. “When I reference ‘the survey’ our findings are from two surveys tabulated 96 hours ago. This is about as current as we can get.” 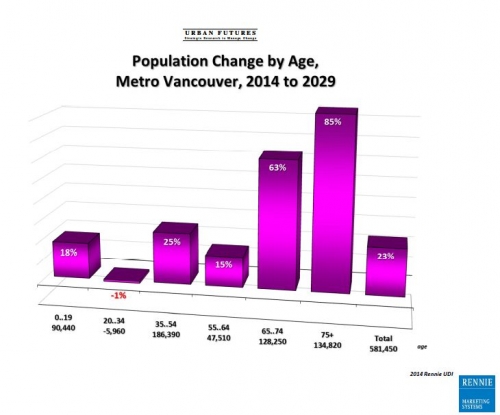 Rennie’s projections stem from a deep well of data, compiled from almost 40-years of marketing and selling properties in the greater Vancouver region. The Olympic Village and historic Woodward's re-development are just two of the high profile residential projects that Rennie Marketing Systems have sold in previous years.

As Vancouver has developed from a sleepy, west coast logging and resource based town to a thriving Asia-Pacific metropolis, Bob Rennie has watched the progress closely and profited generously from the changing landscape. Taking the pulse of the real estate market and listening closely to those buying and selling properties has given Rennie a true insider look at how conditions are changing, and how developers and politicians should respond. At the UDI speech, his analysis again pointed to an untapped but emerging consumer market and how best to adapt to that buyer. 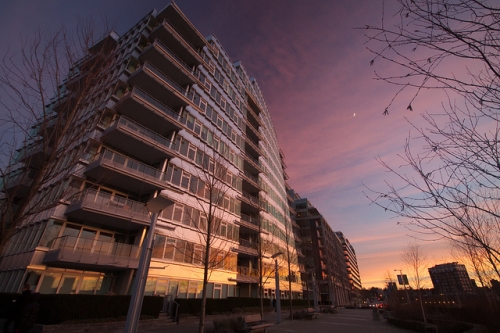 In a city that is becoming increasingly unaffordable for young home buyers, the inevitable result is that the average age of Vancouver residents is slowly rising. Fewer children can afford to live near their parents or grandparents. Selling, or downsizing, among this growing demographic is opening up a whole new market for developers.

“The big shift is that these existing homeowners will be buying down, not up, over the next 15 years,” said Rennie. "With seniors, it will not be about the built form. It will be about walking for coffee, for groceries and to pharmacies.”

Rennie calls the growing number of large condo and apartment developments around the region “energy centers”.

Rennie says if developers want to capture the demographic that will be downsizing, then properties need to be built in these “energy centers” that cater to these aging and prosperous buyers. He says the “buy-down empty nesters” want large, high end three bedroom condos, with a family room and a large outdoor space.

“Build townhomes. They are probably the most undersupplied market,” said Rennie.

Rennie also tackled what he says is a “bumpy, sensitive” issue by examining in detail a recent newspaper story about 52,000 new, wealthy Chinese immigrants waiting to invest and potentially driving up housing prices. Rennie says after some fact checking the number is closer to 2,400 per year from China.

“Not quite as sensational as the headline,” said Rennie. “This story, and many like it, causes the stereotyping of our new citizens. I believe that we have to start admitting that we no longer live in Vancouver. We live on the planet.”

“For the past 39 years, I have observed three traits on immigration. One, it seems the money comes, and then the people do. Two, when money is allowed to flow, it flows. And when it’s not allowed to flow, it really flows. And three, as things slow down in China or anywhere that there is unrest, Vancouver becomes even more sought after, not for speculation, but for schools, clean air, water, diversity, freedom of speech and a very safe place to invest.”

All  reasons that Rennie says will continue to make Vancouver “the most vibrant and livable city in the world.” And of course, a great place to buy a condo.