"It's ridiculous to think people would say: I have all this land, millions and millions and millions of acres of land, I'm giving it to you for a piece of land that is 5 miles by 5 miles and a few dollars a year.  To put it in terms of a real estate transaction, it's preposterous, it doesn't make any sense." 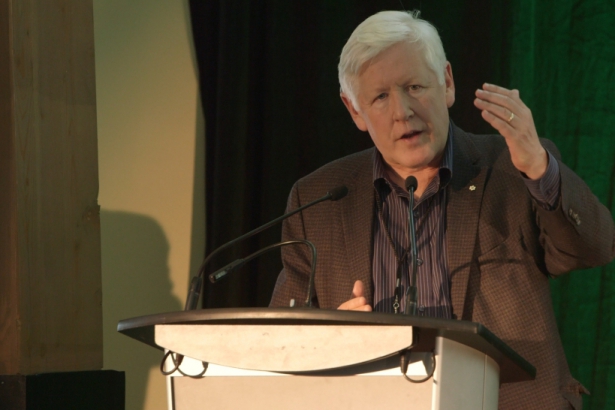 In Fort McMurray today, Bob Rae called treaties a "trillion dollar exchange" that took place in one of the world's biggest real estate negotiations between the crown and First Nations as Canada was born.

The former head of the Liberal Party stood at the podium of the "As Long as the Rivers Flow: Coming Back to the Treaty Relationship in our Time" conference and gave a powerful speech on the need for governments to develop a new way of negotiating.

"Whatever arrangements were worked out a hundred years ago clearly don't work out today," the former Ontario premier with piercing blue eyes told the group. "We aren't getting good governance for First Nations people, getting support, getting revenues...A lot of people say the reserves don't function.  Whose fault is that?  Who built that system?  It was built as a way of setting First Nations aside.  Let's have the courage to move beyond how history has defined some of these relationships and say this just isn't working."

His voice rising with emotion, Rae said, "It's ridiculous to think people would say: I have all this land, millions and millions and millions of acres of land, I'm giving it to you for a piece of land that is 5 miles by 5 miles and a few dollars a year.  To put it in terms of a real estate transaction, it's preposterous. It doesn't make any sense."

"One of the reasons that governments and first nations have such difficulty talking to each other is there is such a gap in understanding of the issues and such a difference in perspective," Rae told the audience at the Athabasca Chipewyan First Nation-organized conference, co-sponsored by the law firm, Olthuis Kleer Townshend LLP, where he is a partner.

"I'm not someone who is opposed to development. I do not have a philosophical view that any or all such development is evil or wrong or immoral.  I don't share that perspective, but I do share a perspective that says we have not yet as a country fully embraced who we really are, or understood the fact that long before European settlement arrived in any part of the country were people living here who lived here for thousands and thousands of years," he said.

"That Indigenous people had a language and government and economy and way of life which had endured for generations and was never respected by the people who came.  The people who came somehow thought their economy and religion and government was superior to the one they found.  And there was a sense of racism and a sense of contempt for the culture that already existed and had the deepest roots in the country from one coast to another coast.  And history now records a history of violence of disease, of discrimination, where people's very existence was denied.  Where it was asserted in legal terms that this was no man's land. That we can claim sovereignty because no one actually lives here.

"When you consider the brutal untruth of that statement, you realize some of the bridges we have to cross to get to equality and understanding.

"When Canada became a country in 1867, one of the first pieces of legislation that was passed was the Indian Act, a piece of legislation that defined who Indigenous people were.  Where they could live, where they could go, what they could go. They were not allowed to vote.  In some cases they could not leave the little reserves that had been assigned to them.  When the movement of the economy and the railroad came further and further , the buffalo disappeared.  Within the space of a decade, the animal that had been the basis of the economy was wiped out.  And people were starved into submission and signed a treaty.