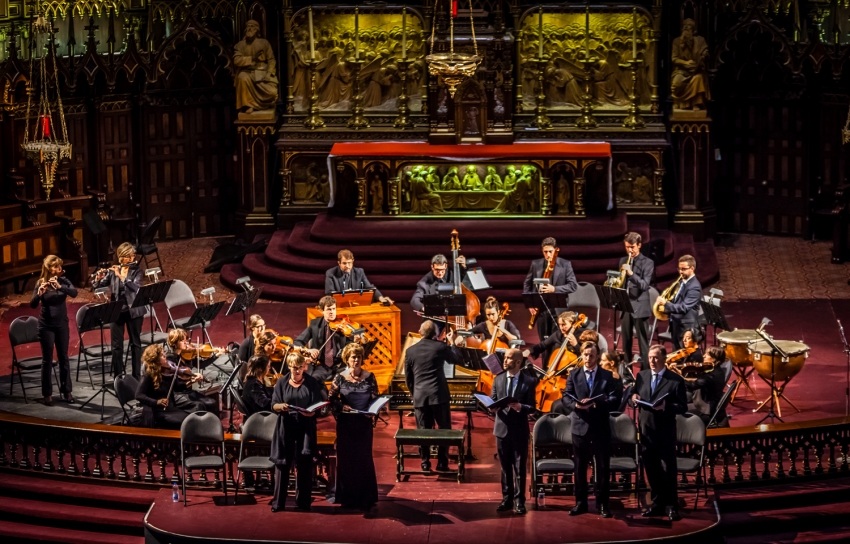 Unless you’re a classical vocalist or instrumentalist, you probably get to hear large bore choral music mostly in audio recordings or, occasionally, in church. And in either of those settings, if you’re like me, you might tend to listen with eyes shut, the better to sink into the tonal bath of the music.

So a concert hall presentation of so towering a work as the B Minor Mass at UBC’s Chan Centre is a rare luxury – an open-eyed look at how the whole intricate performance is put together. Early Music Vancouver (EMV) recruited Montreal’s Arion Baroque Orchestra and a bevy of up-and-coming opera stars for this capstone concert in the first edition of what’s bound to become an annual Rain City tradition, the fortnight-long Bach Festival.

Seeing such an array of live talent brought out a dramatic dimension of the Mass in a way that’s more often associated with an opera than a choral liturgy. For one thing, there’s the onstage juxtaposition of the vocal and instrumental soloists as they swap places and relate to each other as per each movement’s score.

It’s as though all the pipes in a cathedral-scale organ had somehow acquired motility and expressive faces. And, dwarfed at the console of this enormous living instrument, bobbing and weaving as he conducted from the keyboard of a (Vancouver-built, Craig Tomlinson) harpsichord, stood the frenetic figure of music director (and UBC professor) Alexander Weimann.

But it’s not just the visible onstage interactions that account for the theatricality of the Mass. It’s baked into the music and the liturgy itself. Bach illuminates the Latin lines with a rich palette of emotional hues. Each solo voice takes on a distinctive personality cycling through the many moods of the text.

The opening movements, recapping the Eucharistic litany, voice the prayerful soul in direct address to God: “We praise You, we bless You…We give You thanks…Have mercy on us.” The Christe eleison soprano duet set the tone at the very outset. Russian-American sensation Yulia Van Doren defined the lyrical line, underlain by the edgier tone of Canadian star Shannon Mercer.

Mercer’s own, more Germanic, style of lyricism shone in her solo Laudamus te. Then it was back to Van Doren, joined by tenor Philippe Gagné, for the elegant Domine Deus, Rex cœlestis. A ruminative choral Qui tollis segues into the deeper closing movements – alto Kristina Szabó’s awestruck Qui sedes and the heroic flourish of German baritone Christian Immler’s Quoniam to solus sanctus.

In the latter half of the Mass, though, the mood turned more inward looking with a lengthy Credo, an avowal of personal faith. After the opening choral fanfares, Van Doren and Szabó took up the text in the chiaroscuro of a soprano/alto duet, Et in unum Dominum Jesum Christum. And then in the next three movements the Credo affirms belief in the headline events in the Jesus story: his virgin birth, human incarnation, crucifixion, entombment, resurrection, ascension and heavenly enthronement.

Enough drama in this narrative for a whole mini-oratorio in its own right, and Bach (channelled by Weimann and his ensemble) teased out the emotional import with lavish choral and instrumental embellishments of each verb in the text. Then, in the aria Et in Spiritum Sanctum, a second baritone soloist, Sumner Thompson, voiced the sweet serenity of faith.

After the Credo, Bach raises up spires of exaltation in the Sanctus and Osanna. But amidst all this lofty musical architecture, he sets aside a quiet side chapel for rapt adoration in the Benedictus aria, here rendered with exquisite restraint by a second tenor soloist, Charles Daniels.

Which set the tone for mezzo-soprano Laura Pudwell’s supremely contemplative execution of the final aria of the Mass, the Angus Dei (“Lamb of God…have mercy upon us”) – a score so eloquently expressive that it’s tempting to think of it as Bach’s personal prayer in this, the last major complete composition of his life. The final upwelling notes of the concluding Dona nobis pacem chorus left the audience momentarily stunned into silence before a prolonged standing ovation.

EMV’s first ever BachFest opens with jazz take on Goldbergs