Debate of the century? The world's richest climate activist says he'd have facts on his side if he had the opportunity to face off with the libertarian oil barons, who are the largest owners of Canada's tar sands. 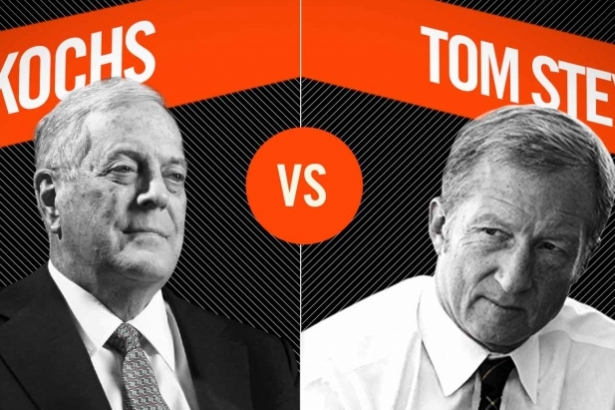 Tom Steyer, who has spent over $10 million to help defeat the Keystone XL pipeline, challenged the oil billionaire Koch brothers to a debate last night on the Bill Maher show.

"I am so for that," Maher responded.

"So people are kind of calling you the liberal Koch brother. Is that an accurate description?" Maher asked.

"I think there are some pretty big distinctions between me and the Koch brothers," Steyer began.

"They're bad and you're good," Maher quipped.

"We're trying to act on behalf of the general public and our kids and they seem to be acting out of their economic self-interest. That's one big difference."

"That is kind of a big difference," Maher said.

Maher asks if Steyer would debate the Koch brothers.

Maher saud he wouldn't hold his breath that the Koch brothers would come on his show.

Later in the interview, Steyer said he'd pledged to give half his money away.

Since the show, Steyer has posted a petition on the NextGenClimate website,  calling the Kochs to debate.  And he asked his email list to sign the petition in the following letter:

Last night on HBO's Real Time with Bill Maher I invited the Koch brothers to come out of the shadows and engage in a free and open debate on U.S. energy policy.

Whether it's Keystone XL, subsidies for big oil, or misinformation about climate change – we have plenty to talk about.

Will you stand with me and add your name to our petition calling on the Koch brothers to accept my invitation?

The science is clear and I can’t stand idly by while climate change threatens the health, safety and security of our children.

That’s why I founded NextGen Climate – to take on the issue of global climate change and directly challenge those who put their own financial interests ahead of what’s best for our children.

The Koch brothers are emblematic of this problem – and so I’m issuing this invitation.

Make no mistake: there is a significant difference between what we are doing and what the Koch brothers are doing.

Democracy isn’t served by underhanded attacks and the voice of the American people shouldn’t be drowned out by anonymous voices with expensive megaphones.

Charles Koch has publicly bemoaned the oppression of “free and public” debate. Here’s his chance to show that he means it.

Sign this petition and tell the Koch brothers to join a public debate on climate, and then be sure to share it with your friends.

Thanks for your support,