'Bigger than thou': Awestruck snowmobilers won't stop after 5 avalanche deaths 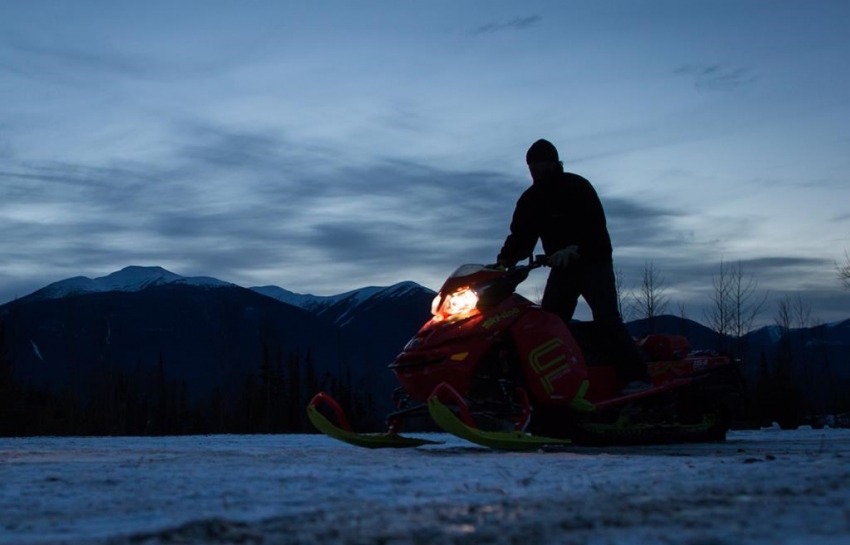 MCBRIDE, B.C. — The day after a colossal avalanche killed five snowmobilers in eastern British Columbia, Thea Pelletier climbed aboard her machine and returned to the backcountry wilderness.

She unfastened a yellow plastic lily from her backpack and planted the flower in pristine snow to pay her respects.

"I had a moment. It was intense. It was bigger than thou," Pelletier said. "You feel the insignificance of what you are when you're up against mountains like this. I can't imagine someone calling my mom to say, 'Your daughter is not coming home.'"

The B.C. Coroners Service revealed over the weekend the identities of the five Alberta men who died during a recreational outing on Mount Renshaw, near the small community of McBride, B.C.

They were identified as Vincent Loewen, 52, of Vegreville; Tony Greenwood, 41, of Grand Prairie County; Ricky Robinson, 55, of Spruce Grove; Todd Chisholm, 47, of St. Albert; and John Garley, 49, of Stony Plain.

The Coroner's office issued a news release that it concluded its investigation of the avalanche area as it works to determine the cause of the slide.

RCMP said the snowmobilers were in four separate groups that had converged just before the slide came roaring down.

As the sun set Saturday evening, four trucks with Alberta licence plates and snowmobile trailers attached were left empty in the darkness at the foot of the Rocky Mountain range.

Inside one was a pack of cigarettes and ring of faux Hawaiian flowers, hanging from the rear-view mirror. There were Tim Hortons coffee cups in another, and an Edmonton Oilers cap sat on the dash of the vehicle next to it.

By early Sunday, groups of snowmobilers prepared to leave McBride — some calling it a stressful weekend, while others believed more painful emotions would set in later.

Two men said they were heading back to the scene to retrieve the sled of their friend, who had died.

"He was a very nice guy, a family man," said Leo, who didn't give his last name, of his friend John Garley.

He said preventing future deaths required "education," but he described the scene on Friday as "just a bad situation."

Neil Petryshen, from Saskatoon, said he and his friends hadn't absorbed the loss yet, but suggested the tragedy wouldn't stop them from going out again.

"Why doesn't it stop us? There's different types of brain mentality for sledders," he said, noting they weren't into going up extreme peaks.

"But the risk-takers, they want to go there. As you advance, you want to push the limits."

Pelletier, 31, and her husband were among exhilarated teams of sledders who returned to the parking lot near the mountain's base after ripping around in the mountains.

She said she'd first heard of the deaths when a news alert flashed on her smartphone.

Her first reaction was "total shock," she said. When she and her husband returned to McBride, they went to dinner at a restaurant that was packed with a sombre crowd.

"It was pretty heavy in there," she said, after listening to rescuers describe pulling bodies and 12 survivors from the snow. "They were just debriefing over a beer."

But the couple still chose to head out the next morning on the mountain where the tragedy occurred.

Pelletier admitted feeling trepidation, but was confident they took proper precautions. She checked the avalanche danger rating, hung an SOS beacon from her neck, and carried a probe and shovel.

"I guess I'm a risk-taker. But you have to take calculated risks," she said.

Though she and her husband steered well clear of the avalanche site, from one vista they could still see vast cracks where snow bowls had been disturbed.

"You've got to go through a lot of sketchy areas to where those guys ended up," she said.

Pelletier was nowhere near the victims the day they died, but said she had often witnessed "showboating and a lot of testosterone" displayed in the male-dominated sport.

"When you go in big groups, I think there's a mentality of one-upping each other," she said. "We saw (the avalanche area) and said, 'Why would you ever go up there?'"

Rock Major, from Saskatoon, said he wasn't influenced by the fatalities because "I'm smarter than those guys.

"You don't go out climbing the mountain at once. Some people go there and they don't belong there," he said. "You ride like your weakest rider, is No. 1."

His friend Shawn Rudolph said he wasn't thinking about the deaths, either.

"You keep it in the back of your mind, but you don't really think about it because it'll just affect the way you treat the hill, and get into a spot where you're gun-shy and nervous."

Search and rescue manager Rod Whelpton, who helped in the response, noted the deep snow made for an unpredictable situation. However Friday's deaths would not necessarily be a future deterrent, he said.

A warning sign posted at the parking lot declared the hazard level was "considerable," falling mid-way on the risk scale.

On the outskirts of town, a bed-and-breakfast owner said the community was not surprised by occasional fatalities.

"That sort of stuff comes with the territory. It happens," said the owner, who declined to be named.

"It's like, you go out on the highway right now and you get hit by a semi-truck. It's very sad, but it's just reality."