Beyond KXL: Obama envoy ends first year in Canada, pointing to areas of accord 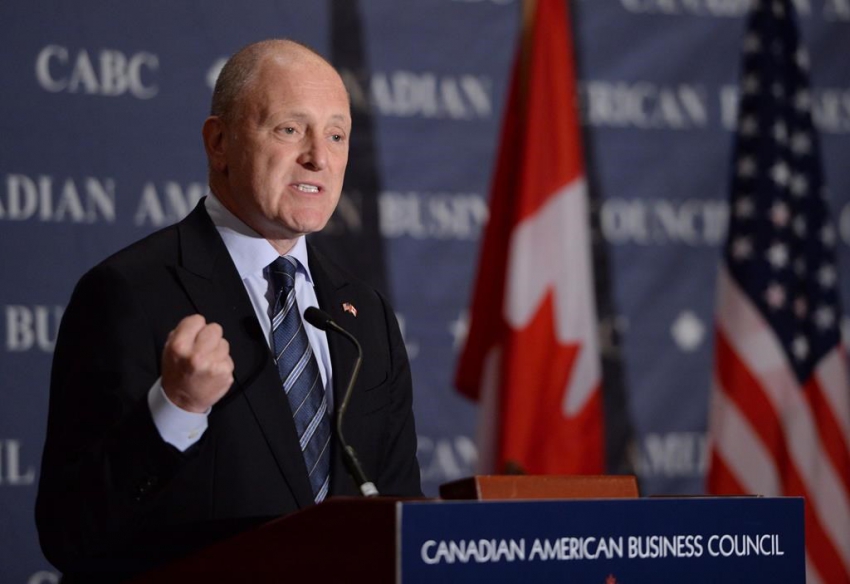 The U.S. ambassador to Canada Bruce Heyman by The Canadian Press

The U.S. ambassador to Canada concludes the first year of his posting acutely aware that a single irritant over an oil pipeline has grabbed so much of the attention in the Canada-U.S. relationship.

"I have noticed that. I definitely have," Bruce Heyman said in an interview this week during a trip to Washington, with his first year as ambassador drawing to a close.

Indeed, the irritant in question is so well known that Heyman doesn't even need to refer to Keystone XL by name: "I think the U.S. government is very aware of the Canadian position with regard to the pipeline."

Any doubt was extinguished early in his tenure. There was a testy exchange with former ambassador to Washington Frank McKenna at an initial public event in Ottawa. Meetings with Prime Minister Stephen Harper were rare.

He says he's getting a great reception across Canada and has been meeting with community leaders, business people, premiers, and government officials in Ottawa.

"I'm having the meetings that are necessary for me to have. I feel very comfortable that we're driving outcomes in our bilateral relationship," Heyman said Monday.

"I can't be distracted by some of those things that are there. I have to just get up every day, doing the very best I can on behalf of our two countries."

Three examples from the last few days illustrate the bilateral ties beyond that bedevilled pipeline:

—Canada and the U.S. announced a years-in-the-making border arrangement last week that will let customs officers pre-screen travellers on the other country's territory, in the hope of cutting down border wait times.

—Canada deepened its participation in the U.S.-led campaign against ISIL. On Tuesday, Harper stood in the House of Commons and, promising to work closely "with our American and other allies," proposed extending Canadian airstrikes for another year in Iraq and expanding the mission to Syria.

—President Barack Obama singled out the work of a Canadian company, in a speech to hundreds of people at the Washington trade summit Heyman was attending.

A little Canadian contingent could be heard cheering in the vast convention hall when the president mentioned Montreal-based Peds Legwear.

Obama described how it had spent US$7 million and rescued a failing sock company in North Carolina, saved its 45 jobs, and then created more than 200 new ones. The president paused at the echo of applause from the Canadian delegation: "Had a little cheer back there," Obama said. "That's good."

The company's CEO said employees were watching video of the speech Tuesday — some with dropped jaws.

"That was fantastic. I guess I was a little bit in shock," said Michael Penner, who had previously met Obama during a business summit at the White House. "I did know he was somewhat aware of our story but I definitely didn't see that coming."

There are countless stories like that — and Heyman would love to talk about them.

In fact, another trade development during his first year on the job barely attracted any attention — a three-per-cent increase in Canada-U.S. trade to $759 billion.

As Heyman noted, just that one-year increase of $24 billion is equivalent to the entirety of Canada's trade with Japan.

While he doesn't attempt to do the math on Keystone XL, it would cost about US$8 billion to build — a figure that corresponds to just over one per cent of annual Canada-U.S. trade, without taking into account the energy economics.

But he's delighted to discuss the other 99 per cent.

That includes the delegation of Canadian businesses that accompanied Heyman to the SelectUSA summit this week, and cheered on Obama's mention of that Montreal legwear company.

"We're working all day and all night focused on one thing: enhancing the Canada-U.S. relationship, and we're making great headway," Heyman said.