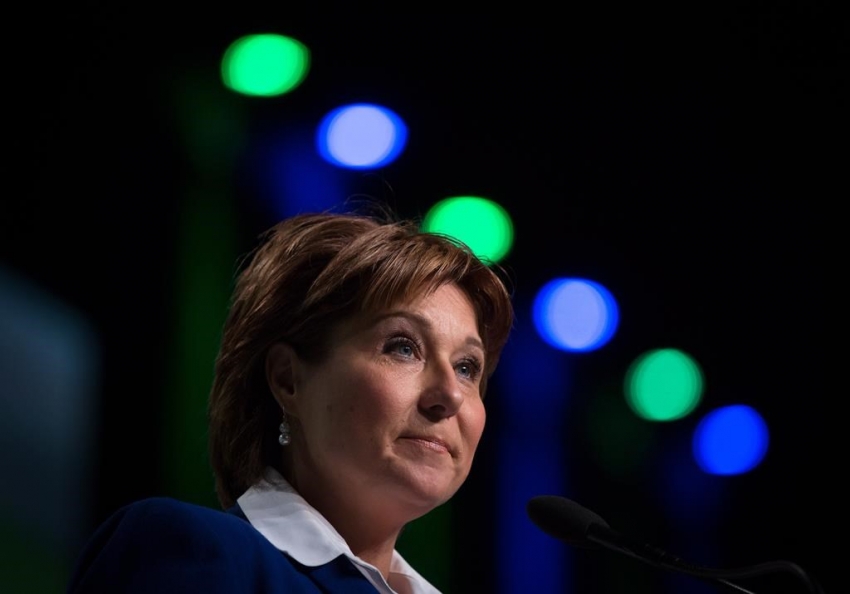 Speaking at the third annual International LNG in B.C. conference, the premier maintained her rosy outlook in a speech to hundreds of business, government and aboriginal leaders in Vancouver.

"If you're not from British Columbia, you won't know that I'm always accused by my political opponents of being an optimist," she said.

"It's true. I am an optimist. I'm also a hard worker, because I know that optimism doesn't get you anywhere unless you're willing to roll up your sleeves and get the work done."

The premier has staked her government's future on the LNG industry, with promises of 100,000 new jobs and more than $100 billion in revenue over 30 years.

There are now 20 LNG proposals in the province, but they face numerous challenges including weakened Asian demand, low energy prices and threats of legal action from First Nations.

But Clark insisted Wednesday that global energy demand would continue to grow. She said B.C. LNG represents a cleaner alternative to coal and oil, as the province has set the toughest emission limits in the world.

She also touted the province's 61 agreements with 28 First Nations along proposed pipeline routes and investments in environmental stewardship and job skills programs for aboriginal bands.

"First Nations in this country, as in many others, have been left out of the economic mainstream for way too long," she said.

"The LNG opportunity truly does represent a chance to redress historical wrongs, to change the course of post-colonial history and make sure that First Nations are fully included in economic growth."

Hours after Clark's speech, the Squamish Nation announced it had granted its own legally binding environmental certificate for the Woodfibre LNG project on Howe Sound, about 60 kilometres north of Vancouver.

Chief Ian Campbell called the agreement "historic," as the band had issued 25 conditions as part of a unique independent assessment. Woodfibre LNG has agreed to comply with the 13 conditions that apply to it, while negotiations continue with Fortis B.C. and the province.

Campbell said Clark's comments signal that First Nations are finally being treated as partners rather than just stakeholders in resource projects. But he added that his nation still doesn't fully support LNG.

"We've largely been alienated and marginalized from any meaningful decision-making or economic participation, or taking into consideration our thousands of years of stewardship of our lands and resources," he said.

Several First Nations were to protest outside the conference on Wednesday evening, taking aim at the $36-billion Pacific NorthWest LNG project near Prince Rupert.

Richard Wright, a spokesman for the Luutkudziiwus — a group within the Gitxsan Nation — said it was planning to file a court challenge against the proposed Prince Rupert Gas Transmission pipeline project.

The pipeline would carry natural gas to the Pacific NorthWest LNG terminal, crossing 34.5 kilometres of territory known as Madii Lii, where a protest camp has been set up for 14 months.

Wright's group will seek a judicial review in an attempt to overturn a provincial environmental certificate for the pipeline. It will argue the government should have consulted with the member nations rather than the Gitxsan Development Corp., a company created to represent Gitxsan economic interests.

"We have been pushed aside and oppressed for generations," he said. "They feel that they can just talk to an organization that doesn't have aboriginal rights, doesn't have land, doesn't have resources, nor a mandate to represent us."

2015 to shape new liquefied natural gas industry, according to BC government