BC landowner "crushed" by NEB's stonewalling on Kinder Morgan expansion

"I was crushed when I left the NEB building," said Byron Smith, a Fort Langley farm owner along Kinder Morgan's proposed Trans Mountain expansion route. After visiting the regulators in Calgary, he said the NEB only handed him a letter informing him that his request for the Board to support independent studies was rejected, without further explanation. 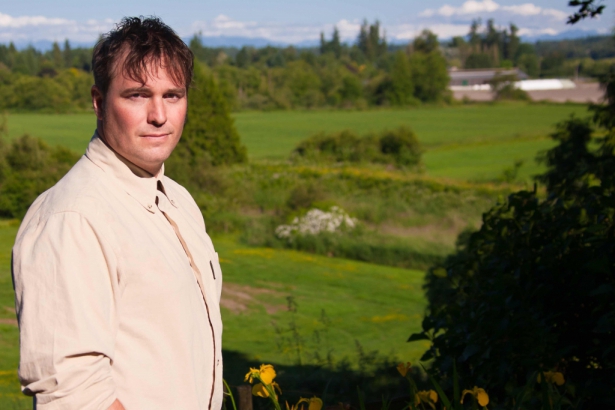 Byron Smith, a fourth-generation farm owner from Fort Langley, was nervous but hopeful as he boarded the plane earlier this month to visit the National Energy Board in Calgary, Alberta.

He was headed to see the federal energy regulator because of lingering questions over the Kinder Morgan Trans Mountain pipeline expansion, which would bisect his family-owned farm if built.

Smith and seven other Fort Langley landowners had applied for an NEB program designed to partially cover costs associated with studies, travel and legal fees for participants of the Kinder Morgan pipeline hearings. Yet all eight landowners received the same rejection letter, which included no explanation why their application was turned down.

"The reason for me going there was to create dialogue," he said. "We kept meeting up with resistance every time we addressed the NEB, and so I thought, sometimes the best way to solve a problem is by sitting face-to-face. When you do things by email and phone calls, it can dehumanize the process.
"I wanted to show that we're average, rational human beings who want to participate. We want to have our information, and we're not being addressed properly. There's been a lack of transparency from Kinder Morgan."
After one hour of waiting, Smith was finally allowed to speak to two NEB staff, including the pipeline's process manager, Reny Chakkalakal. Despite a 20-minute meeting with Chakkalkal, he said she only told him those decisions were made by an independent committee, and that the Board could provide him no answers.
"I was crushed when I left the NEB building," he said. In the end, he said, the NEB only handed Smith a one-page letter informing him that his application was rejected, again with no explanation.
Along with other landowners, Smith filed a request for a judicial review last week to obtain answers from the Board.
Smith is a commercial photographer, and his family bought the picturesque property beside the Salmon River floodplain in 1969. His family have lived in BC for generations.
"The lower part of our property used for dairy cows. We don't operate the dairy -- it's operated by an adjacent property," he explained.  "There are also organic orchards on the property -- as we develop this space we partner with others to grow produce." 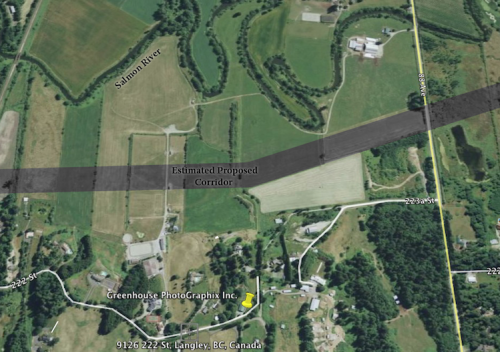 Google map: Yellow pin represents Smith's studio.
Currently, there is no pipeline running through Smith's farm. He said he and his neighbours became worried about the safety of having a bitumen pipeline run through the area, which is near a coho salmon habitat.

Smith worries about the groundwater, which is used for drinking water as well as farming. The Salmon River also flows into the Fraser River, which has one of the largest sockeye salmon runs in the world.