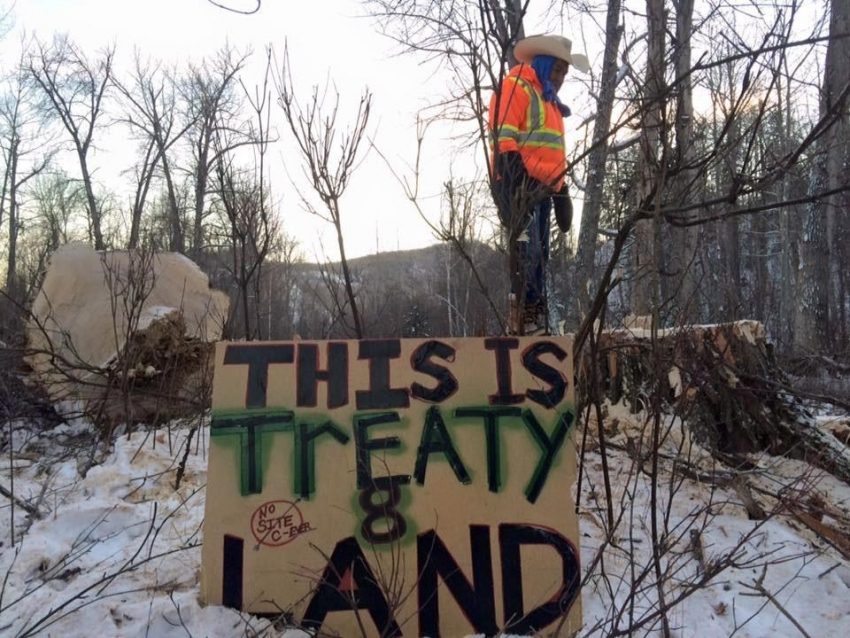 FORT ST. JOHN, B.C. — Members of a small but defiant group are pledging to keep protesting the Site C hydroelectric project in northeastern British Columbia, despite being ordered off the land.

They set up a camp on Dec. 31, when BC Hydro and Power Authority issued an eviction notice while pressing ahead with land clearing for the controversial $9-billion dam.

The Crown corporation gave protesters 24 hours to leave the area known as Rocky Mountain Fort, on the south bank of the Peace River, just a few kilometres south of Fort St. John.

It warned that BC Hydro personnel will remove all contents of the camp and deliver it to RCMP but such action had not been taken by Monday afternoon.

Verena Hofmann, a Peace River Valley resident who was at the encampment over the weekend, said contractors appear ready to begin logging a three-kilometre region that is First Nations territory.

"We've just heard that equipment has started up. It looks like they are intending to keep on cutting," she said on the phone from Fort St. John. "Treaty 8 First Nation people are holding their ground and are not moving from the site, so things are intensifying and changing quickly."

Hofmann said demonstrators believe BC Hydro has no right to force them off the land in the midst of ongoing legal challenges involving Site C.

Several court cases raise major concerns about the potential impact of flooding from the creation of a new lake on the Peace River and the surrounding valley during construction of the dam.

She said upward of about five people at a time are occupying the west side of the mouth of the Moberly River in rotating shifts. First Nations people and other landowners are staying in a small cabin that was flown to the bank, as well as a hunting tent, she said.

It takes about 30 minutes to walk or less by snow machine to reach an area where contractors are set up, she said.

"There is no physical structure blockading BC Hydro's construction, it's individual people approaching them and reasonably and respectfully pleading with them to cease construction."

Local people are trying to protect the land — significant because it contains swaths of old-growth boreal forest — until court proceedings run their full course, Hofmann said.

She said the group has asked that Prime Minister Justin Trudeau reassess the environmental approval granted for the project by the former Conservative government, in conjunction with the B.C. government.

A spokesman for Site C project said the utility will continue to monitor the situation and is evaluating "all options."

"BC Hydro respects the right of all individuals to peacefully protest and express their opinions about Site C in a safe and lawful manner," Craig Fitzsimmons, the manager of communications and issues management, said in an email.

"We are hopeful this can be resolved. We are in discussions with the protesters and local authorities to allow us to resume construction activities."

The Rocky Mountain Fort was established in 1794 by the North West Company as a fur trading post and is the site of the earliest settler post in mainland B.C.

The dam will be the third on the Peace River, creating an 83-kilometre-long reservoir that's slated to power up to 450,000 homes a year.

BC Hydro announced in mid-December that a consortium of three companies will be paid about $1.75 billion to build the largest components of the Site C development over the next eight years.