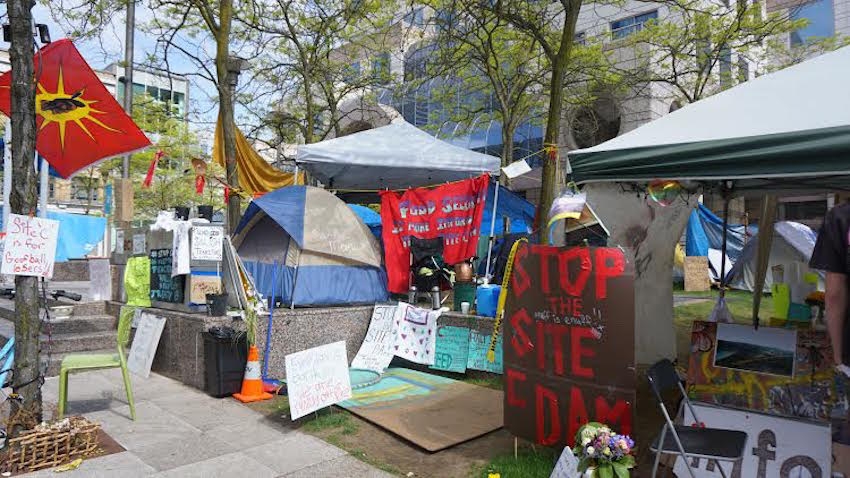 BC Hydro is going to court in a bid to evict opponents of a hydroelectric dam project camped outside their downtown Vancouver office. Photo by Elizabeth McSheffrey.

The utility company filed a notice of civil claim and an application for an injunction in B.C. Supreme Court Wednesday, alleging protesters opposed to the company's Site C dam project are trespassing on BC Hydro property and causing the company harm.

The protesters have been stationed outside the company's head office 24 hours a day since March 13, after a B.C. Supreme Court judge granted an injunction to remove protesters from a tent camp at the $8.8 billion megaproject's construction site near Fort St. John, B.C.

Documents filed for the new injunction application allege protesters have vandalized the building, urinated, defecated and smoked marijuana on the property, dug up portions of the lawn, and harassed and intimidated employees, visitors and passers-by.

None of the allegations have been proven in court.

The documents said the camp began as two tents and has grown to include more than a dozen tents, canopies, banners and tarps.

BC Hydro said in a statement that the camp now poses health and safety risks for the company's employees and members of the public.

The statement said campers were informed earlier this month that they do not have permission to be on the property overnight and that they can express their opinions in a designated area during the day.

Campers were asked to remove their tents, tarps, wood structures and latrine, but have not complied.

Kristin Henry, one of the protesters named by BC Hydro in the court documents, said she was surprised by the injunction.

Henry said she has not been staying at the camp since she was hospitalized following a hunger strike last month, but has visited and the protest is going well.

"Things are peaceful and happy and wonderful," she said. "I think the news of the injunction will come out as a pretty big surprise because we're totally within our rights to publicly protest a public issue."

The court injunction will not shutdown the protest, Henry said.

"I don't see people standing down and letting this dam happen."