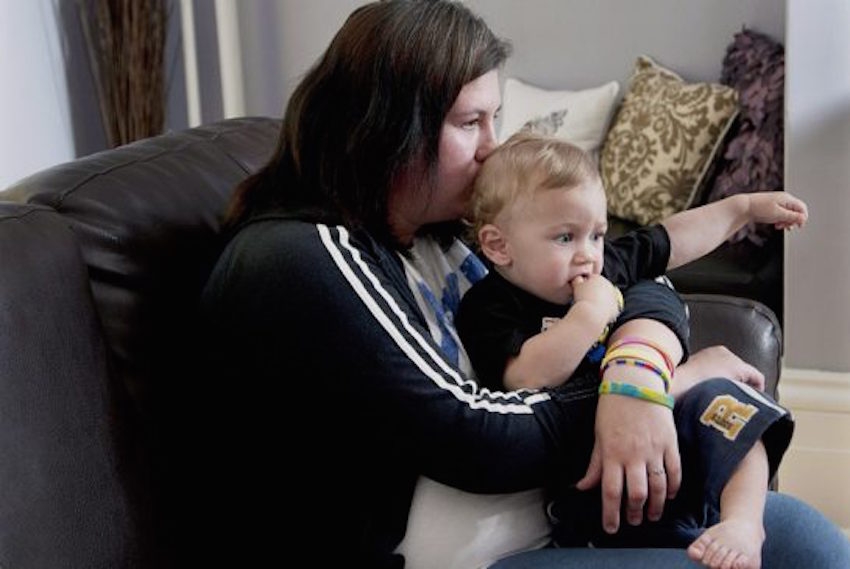 New report finds that approximately half of those living below the poverty line are either the working poor or children of the working poor. Pictured above, single mom Amy Young with 15-month-old son Striker from a 2012 file photo. Photo by Andrew Vaughan / The Canadian Press.

B.C.’s poverty rate is virtually unchanged from where it was a decade ago yet the province remains the only one in Canada without a poverty reduction plan.

And it’s not because B.C. doesn’t have a poverty problem. At 13.2 per cent, B.C.’s poverty rate is the second highest in the country says a new report – Long Overdue: Why B.C. Needs a Poverty Reduction Plan, co-published today by the Canadian Centre for Policy Alternatives (CCPA), the United Way of the Lower Mainland and the B.C. Poverty Reduction Coalition.

Poverty rates in B.C. remain much higher than historic lows seen in the late 1970s and late 1980s. Measures of severe hardship, such as food bank use and homelessness, have continued to climb. And working poverty rates are also on the rise.

“Our report refutes the common misconception that the poor should simply ‘get a job’,” said report co-author Seth Klein, B.C. Director of the CCPA. “The B.C. government, which stubbornly refuses to develop a poverty reduction plan, claims to be addressing poverty with its jobs plan. Our research points to the failure of the government’s strategy.”

The report also finds that:

Income for those on social assistance is not just below the poverty line, but thousands of dollars below it. A single person receiving basic welfare of $610 per month has an annual income that reaches less than 40 per cent of the poverty line.

Someone working full-time year round at the minimum wage of $10.85/hour earns about $3,500 a year less than the poverty line for a single person.

Costs for core essentials like housing, child care, energy/electricity and food have increased much faster than incomes, and escalating prices of these essentials are placing additional stress on the already-tight budgets of low-income families.

The social safety net is broken throughout the province, and our economy loses 8 to 9 billion dollars annually paying for the costs of poverty. The need to rebuild that safety net through a poverty reduction plan is long overdue,” said Trish Garner, Community Organizer, B.C. Poverty Reduction Coalition.

The report notes that the poverty gap in B.C. – meaning the amount of money needed to bring every British Columbian living under the poverty line to that threshold – was $5.8 billion in 2014. That’s how much it would take in increased wages and income supports to eliminate poverty in our province. This may sound like a lot of money, but is only about 2.4 per cent of B.C.’s economy (as measured by GDP).

“Too often, we become resigned to the presence of poverty, hunger and homelessness. The problems seem so big and complex that it’s hard to see how they can be solved,” said report co-author Iglika Ivanova, CCPA-BC Senior Economist.

“But, effective poverty reduction plans have been developed in Canada and internationally and there is no reason it cannot be done here. Poverty, hunger and homelessness are not inevitable in a society as wealthy as ours,” she added.

“Since 2008, over 400 organizations representing hundreds of thousands of British Columbians from diverse sectors have signed the B.C. Poverty Reduction Coalition’s call for a comprehensive B.C. plan with legislated targets and timelines,” said Garner.

“The Union of BC Municipalities, B.C.’s Chief Medical Health Officer and Child and Youth Advocate, and the B.C. Legislature’s own finance committee have also repeatedly advocated for such a plan. Yet these calls have gone unheeded.”

Essential elements of a comprehensive poverty reduction plan outlined in the report include:

Adopting the $10-a-day child care plan, which includes free child care for those earning less than $40,000.

“Investing in a poverty reduction plan now is the best investment we could make for our future, especially when you consider how poverty robs our future generation, our children, of their potential,” said Michael McKnight, President & CEO, United Way of the Lower Mainland.

“United Way and other non-profits work hard to help children and families in need but there is only so much we can do. There is always more demand than there are resources available.”

The report findings are based on data from governments and non-governmental organizations, and underscore that action is long overdue. Before B.C.’s provincial election in May, it is incumbent upon all political parties to finally join all other Canadian jurisdictions and commit to adopting a comprehensive poverty reduction plan.

The full report and a four-page summary can be found at policyalternatives.ca/overdue