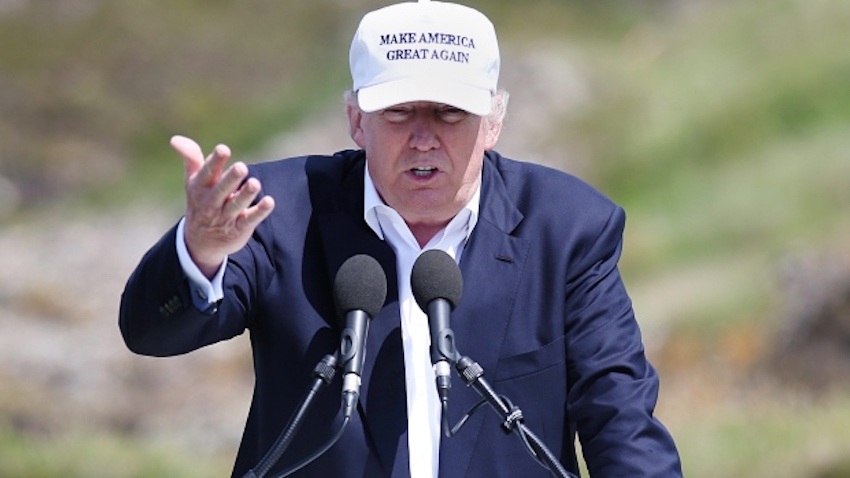 U.S. President-elect Donald Trump pictured speaking to the media while on a business trip in Scotland in June 2016. Photo courtesy The Canadian Press.

Mike de Jong said that while he has no idea what the incoming Trump administration will act upon, its rhetoric has certainly been focused on shielding the U.S. from foreign competition.

"There are protectionists in the U.S. who have repeatedly sought to deny American consumers access to the forest products ... that we produce more efficiently than anyone else," he told a news conference Tuesday. "They don't like the competition. And we're seeing that again."

A U.S. trade commission ruled last week that Canadian lumber products are harming American producers, setting the stage for the imposition of duties that could cause job losses and plant closures north of the border.

De Jong said forestry remains a cornerstone of the B.C. economy and countless communities rely upon the industry. Those communities have worked to diversify their markets, so the province is not as vulnerable as it was 15 years ago, he said.

"But, the forces of protectionism, if allowed or encouraged to proceed down that path, will cause us problems."

He said Premier Christy Clark and the B.C. government are working closely with Prime Minister Justin Trudeau and have indicated to him that softwood lumber should be the priority on trade.

"It should be at the top of the list when the prime minister and soon-to-be president Trump sit down for their inevitable first discussion," de Jong said. "It has great implications for this country."

"There are upwards of 20 or 25 million Americans, Americans who rely on trade with Canada for their jobs," he said.

"It's probably time someone started talking on their behalf ... and pointing out the price that they will pay, that small-town America will pay, if barriers are erected at our border, and the price that American consumers will pay."

The preliminary finding made by the U.S. International Trade Commission last week could force American importers of Canadian lumber to pay cash deposits to cover preliminary countervailing duties in early March, followed in mid-May with deposits for any anti-dumping duties, unless the deadlines are extended.

The decision to investigate came in response to petitions from the U.S. Lumber Coalition, which alleges that provincial governments, owners of most of Canada's vast timberlands, provide trees to Canadian producers at rates far below market value, along with other subsidies.

Softwood producers in Canada dispute the allegations. The B.C. Lumber Trade Council has said the claims are based on unsubstantiated arguments that were previously rejected by independent NAFTA panels.