B.C. commits to indigenous control of child welfare after release of report 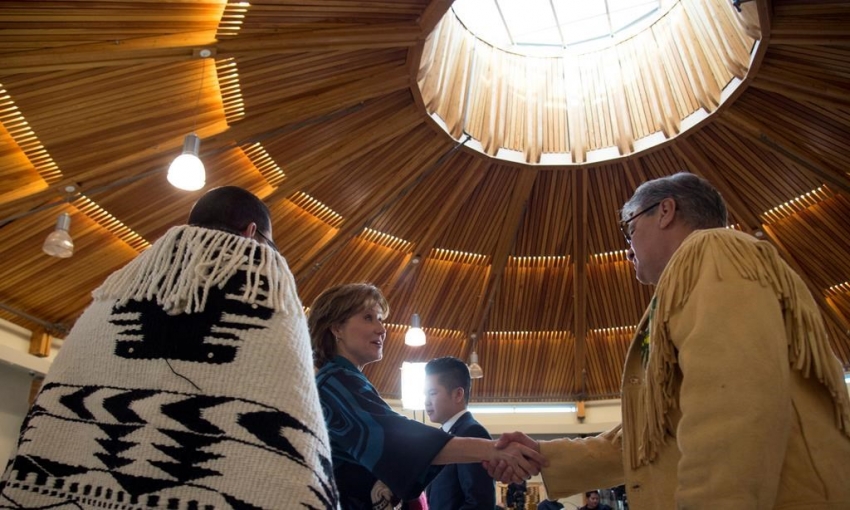 British Columbia is committed to First Nations taking over child-welfare decisions in their communities, the province's Children's Minister said Monday after receiving a report about how the current system has failed aboriginal children.

The report by a special adviser to the ministry issued 85 recommendations to reduce the staggering number of aboriginal kids in care of the B.C. government. A major focus is the need to return control to indigenous communities.

Premier Christy Clark accepted the report and said the province had already begun work on 40 recommendations and would implement all those that apply to B.C. Other recommendations are directed at the federal government.

"Separating a child from his or her family must always be a last resort for government. We must ask ourselves why it is that First Nations children are so much more likely to be separated from their home than others," Clark said.

She did not offer a timeline or an estimated cost, other than to say it would be a "long journey" involving a "significant investment."

The 40 recommendations the province is already working on include regular meetings with Metis and First Nations leaders, recruiting indigenous people to work in the ministry and working to better inform indigenous people about the child-welfare system.

Children's Minister Stephanie Cadieux said her ministry has begun discussions with some aboriginal communities on transferring jurisdiction for child welfare, either under current provincial legislation or legislation they write themselves.

"We agree that indigenous families and communities should be the ones deciding their futures," she said.

Grand Chief Ed John was appointed a special adviser on indigenous child-welfare in September 2015. Since then, John has had discussions with First Nations leaders, delegated aboriginal agencies and the provincial and federal governments.

"The report is entitled 'Indigenous Resilience.' Well, hope is the source of that resilience," John said.

The report's detailed recommendations are divided into 10 key categories, including ensuring direct support for indigenous children and families and enabling greater access to legal services.

It also urges a more equitable funding formula between the province and federal government, an increase in early intervention services, better reunification and permanency planning, and nurturing a sense of belonging and prioritizing culture.

Finally, the report calls for a national strategy for indigenous child welfare.

The portion of aboriginal kids in B.C. care has increased over the past decade, from 50 per cent in 2006 to 61 per cent this year, and Clark's government has faced fierce criticism on the issue.

Last year, B.C.'s representative of children and youth released a report that blamed the overdose death of a legally-blind aboriginal girl on "professional indifference."

After an aboriginal teen jumped to his death from a hotel window, the ministry and children's representative undertook a sweeping review that revealed 117 children in the province's care were placed in hotels in 2015.

Melanie Mark, child-welfare critic for the Opposition New Democrats, said John's report exposed how easy it was for aboriginal kids to fall through the cracks. But she called the premier's announcement a lot of "fluff" and "high-level talk" without a lot of detail or commitment.

Cheam First Nation Chief Ernie Crey said he met with John during consultations on the report and urged him to ensure that aboriginal kids are not taken out of their communities and placed in non-aboriginal homes when they are put in foster care.

"They start to lose their identity and their identification with the community," he said. "That's where a lot of the difficulties facing aboriginal kids in care start."