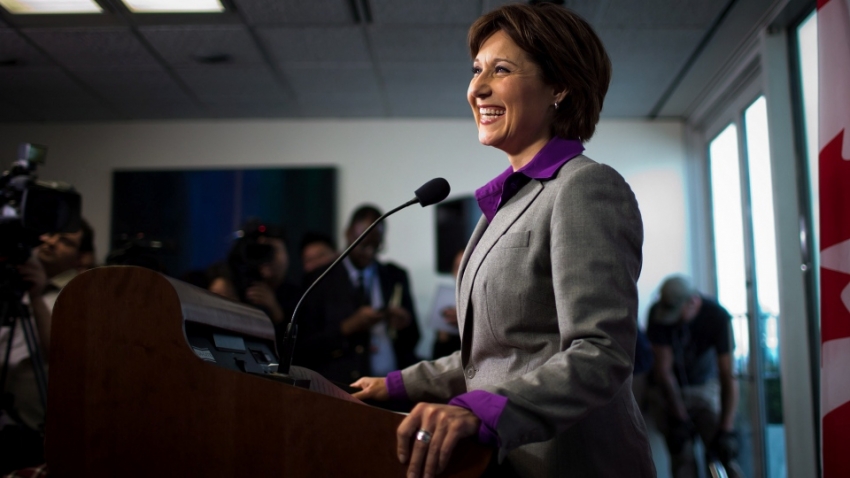 VICTORIA — Premier Christy Clark has said she will bill British Columbia as an environmental leader at the upcoming world climate change summit in Paris. But her own government-commissioned report concludes the province will miss its legislated greenhouse gas reduction targets.

In the report released Friday, a climate leadership team concluded the province will fail to meet its 2020 targets and recommends focusing emission-reduction targets for 2030 and 2050.

The team — appointed by Clark's government — also calls for an increase in B.C.'s carbon tax by $10 a tonne each year starting in 2018, to ensure the province remains a leader in the fight against climate change.

"We always said the 2020 target was going to be challenging to meet," Environment Minister Mary Polak said in response to the team's report. "They have confirmed that in the modelling that they have done."

Former premier Gordon Campbell introduced legislation eight years ago that aimed to reduce GHG emissions by 33 per cent below 2007 levels by 2020.

"The 2020 target is extremely difficult to meet at this point," concludes the team's 36-page report.

"We're really at a crossroads," said Smith. "We can continue to lead using these recommendations, or we are going to fall behind."

Sierra Club BC spokeswoman Caitlyn Vernon said the report marks a sad day for B.C. when failing to meet legislated targets is what passes for climate leadership.

B.C. was the first government in North America to introduce a broad-based carbon tax in 2008 as part of it climate policy. The tax reached $30 per tonne of carbon emissions — about seven cents per litre at the gasoline pump — in 2012, but it has not been increased since.

Polak said the government will start a public consultation process in an effort to develop a new provincial climate plan, due for release next spring.

"The important thing here is to have a plan in the spring that sees us continuing our leadership in climate action and taking the steps needed to achieve the targets we put in front of us," she said.

Polak disagreed with the report's findings that B.C. has stalled in recent years on the climate front. She said the province continues to support climate policies, but it froze the carbon tax to allow others to catch up.

"I don't think we've taken our foot off the gas at all," she said.

The team's report makes 32 recommendations, including lowering the provincial sales tax to six per cent from seven per cent. It also recommends eliminating PST charges completely on electricity rates.

B.C.'s lone Green Party MLA Andrew Weaver said the government's plans to develop a liquefied natural gas export industry blows a hole in its climate plans, because GHG emissions from one LNG facility would exceed the government's targets, he said.

"Christy Clark, rather than going triumphant to Paris as a climate leader, will be going as a climate failure," he said.