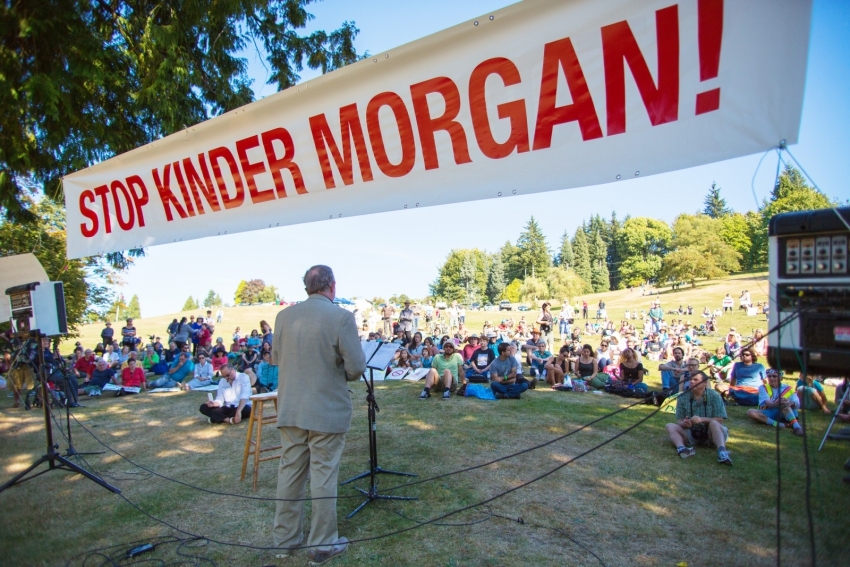 Burnaby Mayor, Derek Corrigan, a vocal opponent of the Kinder Morgan Pipeline, at a rally in Nov. 2014. Photo by Mark Klotz.

A legal battle between the City of Burnaby and the Trans Mountain pipeline expansion has ended with the British Columbia Court of Appeal ruling the National Energy Board can override municipal bylaws.

The fight began in 2014 when Trans Mountain was set to begin field studies on Burnaby Mountain, which required it to cut down trees, drill boreholes and operate heavy machinery — activities that violate the city's bylaws.

Before beginning the field work, the company obtained a ruling from the energy board that confirmed it was allowed to conduct surveys and examinations on land in Burnaby without the city's consent.

Burnaby didn't appeal the energy board's ruling, but when Trans Mountain began engineering studies on Burnaby Mountain in September 2014, the company was served with notices of bylaw violations.

The dispute ultimately wound up in B.C. Supreme Court, where Justice George Macintosh ruled in 2015 that the energy board has the constitutional power to direct or limit the enforcement of Burnaby's bylaws.

A three-member panel of appeal court judges agreed in a decision on Monday, with Justice Lauri Ann Fenlon writing that the energy board had jurisdiction to resolve the conflict between Burnaby's bylaws and the powers granted under the National Energy Board Act.

The city continues to oppose the $7.4-billion project, which would triple the capacity of the pipeline running from Alberta to Burnaby. In December, it filed an application with the Federal Court of Appeal for leave to appeal the federal government's approval of the expansion.

Mounties arrested more than 100 people during protests in 2014 on Burnaby Mountain, but a judge later tossed out civil contempt charges against many of the activists who were arrested for violating a court injunction ordering them to stay away.

The company said it had provided the wrong GPS co-ordinates when it asked for the original court order and the measurements were so inaccurate that the site was outside the area covered by the injunction.