BC and Alberta reach draft agreement on pipelines to the coast 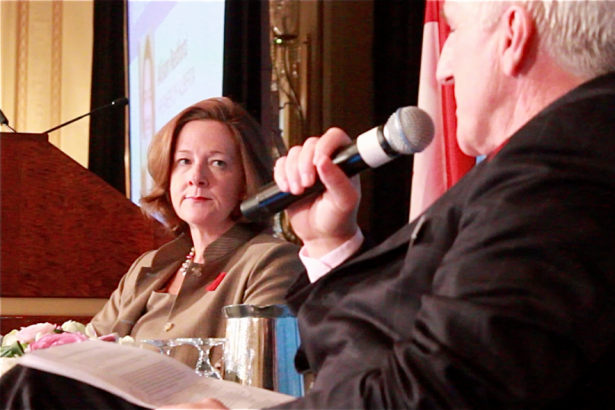 The premiers of Alberta and British Columbia have reached a framework agreement that could open the door to more Alberta oil moving through BC pipelines to the coast.  Environmentalists are calling it a flip-flop and a poorly negotiated backroom deal.

BC Premier Christy Clark and Alberta Premier Alison Redford announced that after five hours of top-level negotiations, Alberta has accepted in principle the five conditions that Clark says need to be met in order to allow pipeline development to go ahead in BC.

“Agreement on BC's five conditions is a necessary first step before any proposals can be considered for approval," said Premier Christy Clark. “By working together with Alberta through these principles we can grow our economies, and strengthen Canada's economy overall."

“We are in a battle for Canada’s future”, Redford told a luncheon crowd today at Vancouver’s Board of Trade. “Our provinces both have unemployment rates well below the national average. We both anticipate strong economic growth in the natural resources sector and we are both looking for emerging economies to export to across the Pacific.  Together we are truly Canada’s economic engine.”

A major cog in that engine however, is getting oil through “super-natural” British Columbia to the coast and on to new markets overseas. In BC, oil industry proposals to significantly increase oil shipments through the province and along the coast have met with vigorous opposition from environmentalists, First Nations and others. During the past election campaign, and in response to that opposition, Clark announced five conditions would need to be met before allowing more oil through the province.

Those five conditions include strict environmental and spill-response standards, consultation with First Nation and a fair share of the economic benefits.  Redford immediately made it clear that Alberta will not share its sacrosanct royalties with BC, leading to what Redford called a ‘frosty’ meeting with Clark earlier this year.

Now, with Clark backed by a majority government, both provinces appear to be on-board and willing to move forward on all conditions.

“I have confidence that Premier Clark understands that she was elected to build British Columbia’s economy and that she is very much looking to develop a relationship that meets her five conditions but is also business friendly. I think that she is very focused on that and I think the discussions will go very well,” said Redford.

Redford says the issue of royalty-sharing was not a topic for negotiation, but BC is free to approach industry on its own.

“This makes it official that Alberta’s royalties are off the table and BC has the right, and I would say an obligation, to negotiate with industry on appropriate economic benefits,” says Redford. “The government of Alberta does not have a role in that dialogue.”

Speaking to Alberta media via phone later in the morning, Redford made it clear that getting an agreement was a priority heading into BC today.