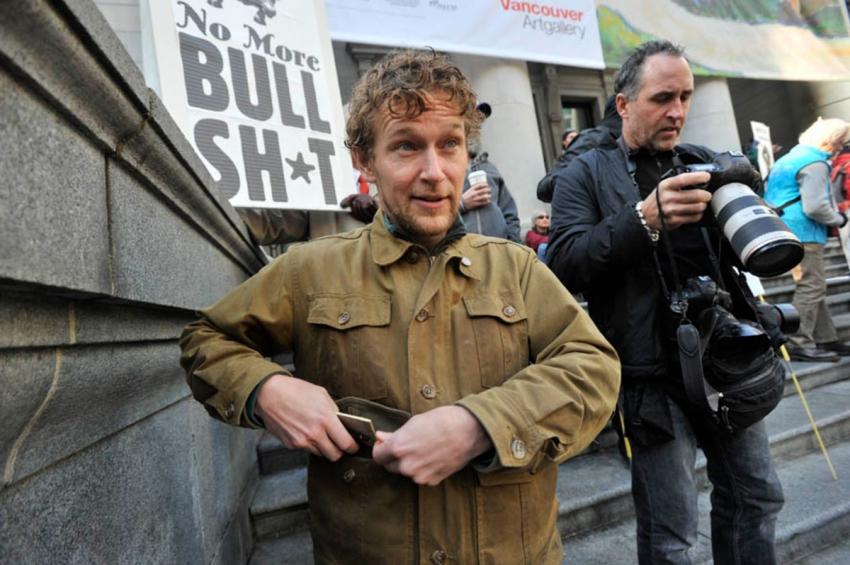 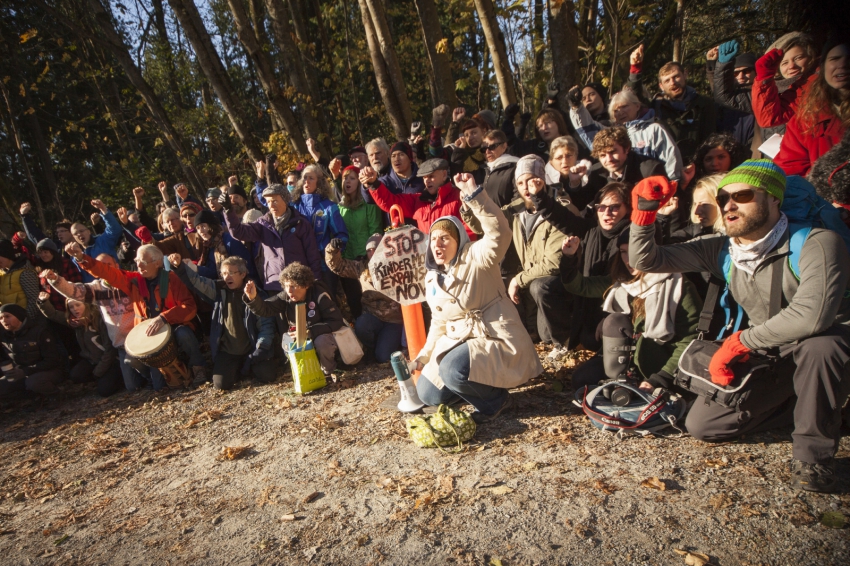 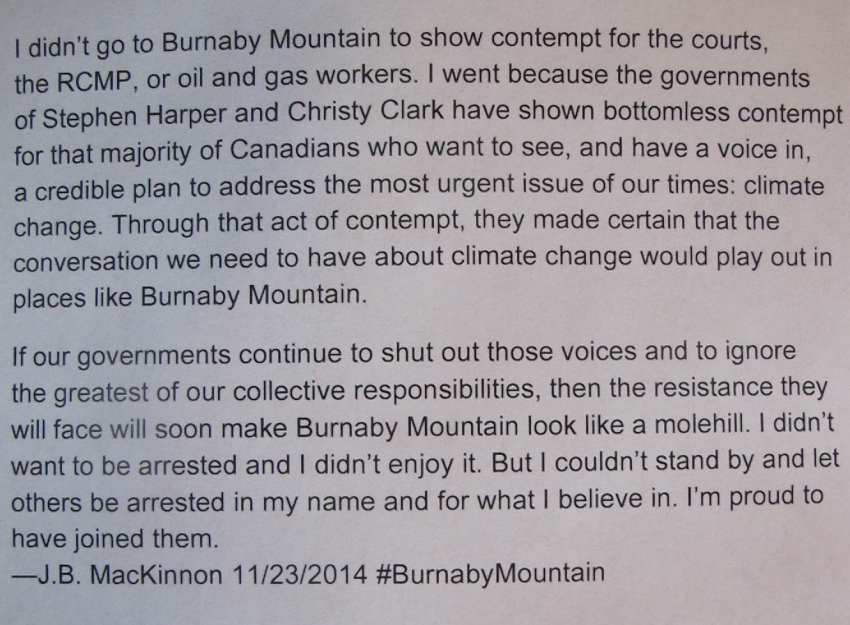 Prominent author J. B.  MacKinnon has been arrested on Burnaby Mountain while protesting against the proposed Kinder Morgan pipeline. Hands cuffed behind him with plastic, the author was guided into a police van along with 14 other protesters who were also arrested this morning.

MacKinnon is an independent journalist and author whose works include: The 100-Mile Diet, a bestseller that helped catalyze the local foods movement, Dead Man in Paradise, I Live Here (co-authored with Mia Kirshner) and his latest book The Once and Future World (on rewilding), which was a national bestseller and won the U.S. Green Prize for Sustainable Literature. He has won nine National Magazine awards and collaborated with co-author Alisa Smith (The 100-Mile Diet) on the Food Network show, The 100-Mile Challenge.

After being processed by the RCMP, MacKinnon issued a statement exclusively to the Vancouver Observer, commenting on his arrest while protesting the Kinder Morgan pipeline expansion on Burnaby Mountain: 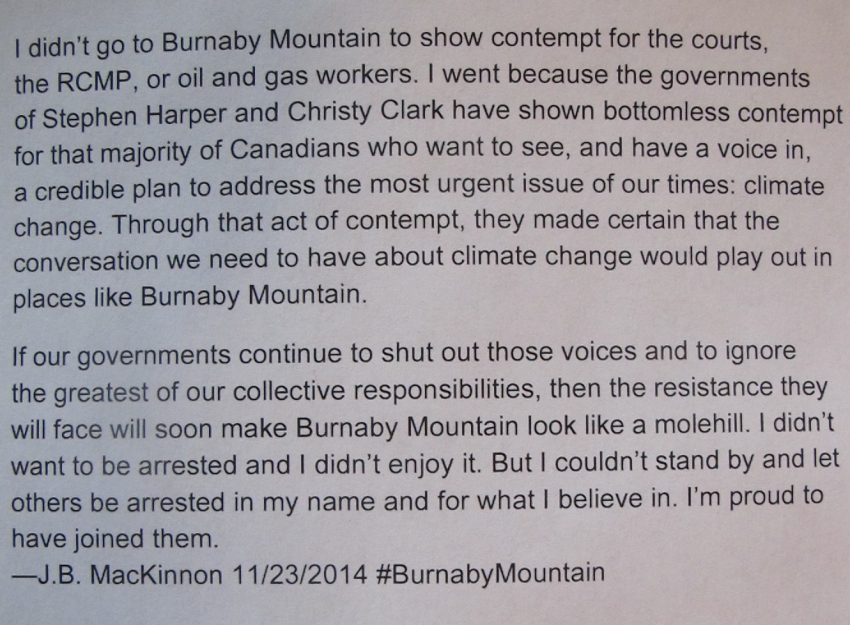 Ten women were arrested along with 5 men, including MacKinnon, bringing the total arrested this week for protesting the tar sands pipeline to 53.

Photos and videos of the clashes are being shared around the world by news outlets and social media. 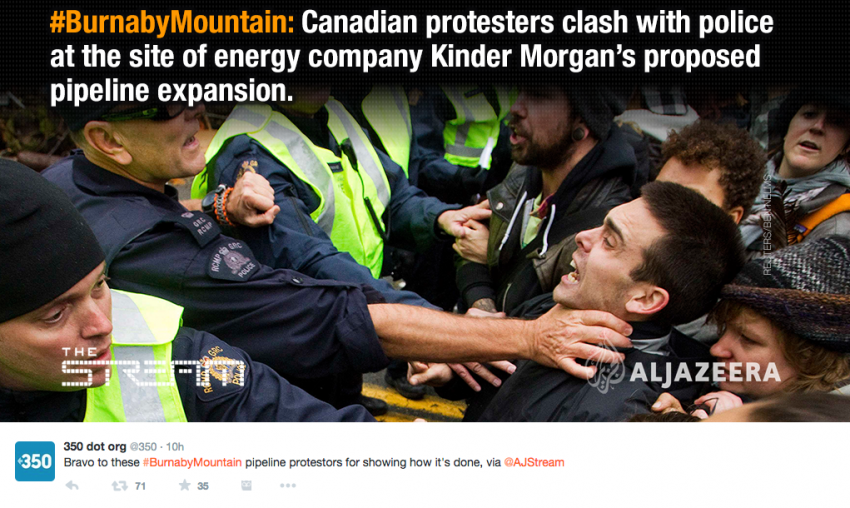 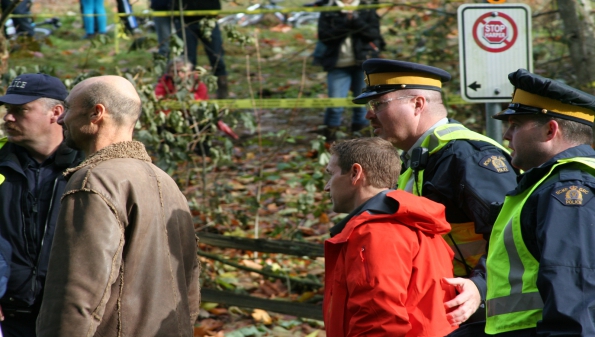 A crowd of protesters and concerned citizens began collecting at the bottom of Centennial Drive on Burnaby Mountain around 10:15am. Spirits were high amongst the diverse crowd. All ages were represented, with children and elders standing side by side around signs that loudly proclaimed opposition to Kinder Morgan.

Lynne Quarmby, the SFU professor arrested yesterday and currently facing a civil suit from Kinder Morgan, resolutely returned to the hill to applause as the crowd started to grow. Helicopters flew overhead, airlifting equipment into the drilling site further up the hill. They were met with loud cries of disapproval.

Video of scientist Lynne Quarmby getting arrested on Friday, by the Vancouver Observer.

After a number of addresses from protest organizers and individuals aware of the legal ramifications of crossing into the area under injunction by the courts (where Kinder Morgan is now drilling around the clock) small groups of individuals who were prepared to enter the drilling site convened to discuss the logistics and practicalities of doing so.

An unidentified woman, flanked by smiling children, climbed up onto the Burnaby Mountain Conservation Area sign and spoke to the assembly about the reasons the protest was taking place. The cheers and applause prepared the crowd to move, and it was not long before the crowd began a slow march up to the injunction site chanting "No pipeline on stolen Native lands" to the beat of drums.

Sunlight, shining down through trees glistening after last night's rain, illuminated a colorful, boisterous procession up the drive. The yellow tape marking out the injunction boundary, enforced by a police cordon, came near. The protesters soon reached the boundary line and halted.