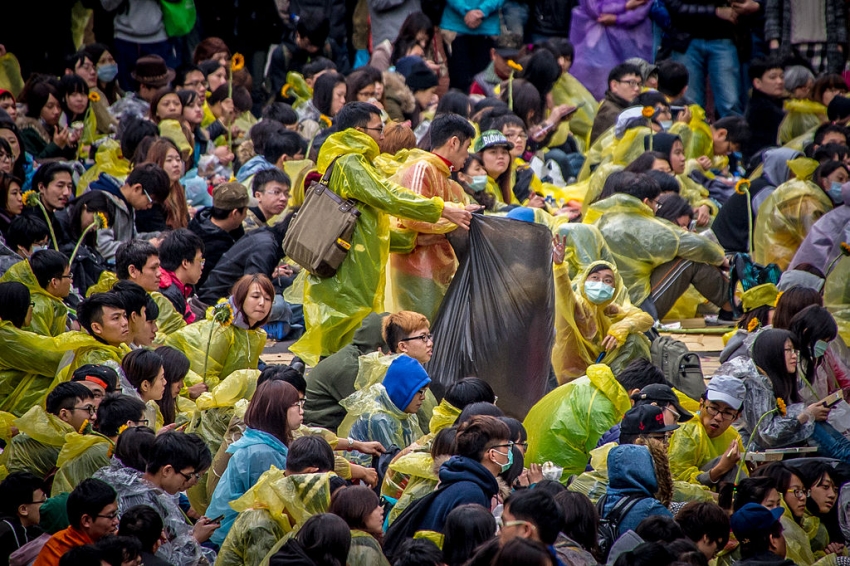 "Sunflowers" in the rain to usher out Taiwan's old order. Photo: Wikimedia Commons.

Dark times last weekend in what used to be called “Free China.” In both Taiwan and Hongkong, pro-democracy forces, with strong youth backing, struggled to retain electoral gains.

Meanwhile, at Hongkong polling stations, would-be voters – mostly young – queued up as late as 2:30 a.m. in a last ditch bid for the pro-democracy opposition bloc to hang onto the 24 Legislative Council (LegCo) seats needed to veto Beijing-imposed diktats.

But for all these dark forebodings in far off East Asia, here on Vancouver’s Granville Street the weekend mood couldn’t have been sunnier. Taiwanese, Hongkongers and mainland Chinese (plus the usual diverse assortment of non-Asian Vancouverites) came together to feast amicably on “stinky” tofu, garlic sausages and deep fried squid at the annual Taiwan Fest.

Around the corner, in the Orpheum Annex, Festival organizers laid on a feast of another kind: an earnest seminar on “The New Generation Wars” in Taiwan and Hongkong – an increasingly vexed topic, as the latest headlines attest. The event was jointly sponsored by the Asian Canadian Special Events Association and Taiwan’s Tzu Chi Foundation (a Buddhist-inflected Salvation Army-style order of social missionaries).

Over the past two years, youthful “Occupy”-style demonstrators have intermittently brought business-as-usual to a standstill in “Free China” enclaves for months on end, first in Hongkong’s financial hub and then on the floor of Taiwan’s Legislature. The young protestors then went on to establish their own political formations, now in governing coalition with Tsai and hotly contesting LegCo seats.

No coincidence that the KMT should try push back with counter-demonstrations by older retirees. Nor that Hongkong’s pro-Beijing powers-that-be should try to offset the pro-democracy bloc’s two-to-one edge in directly elected legislative seats by allotting an extra 43 percent of LegCo seats to occupationally defined, guild-like “functional constituencies” dominated by older professionals.

Taiwan-born to a mainland Chinese family, he’s recently wed a Hongkong-bred mainlander and is as comfortable in Cantonese as he is in Taiwanese or Mandarin. For a couple of years he edited Hongkong’s prestigious “City” Magazine before returning to Taiwan in 2015 to establish the Chinese edition of Bloomberg Businessweek, teach in Taiwan’s Ch’ing-hua University and co-found the Social Democratic Party as well as the long-form journalistic website “The Reporter.”

He also writes for the Financial Times’ Chinese op-ed page, co-hosts Taiwan’s TedX Talks and is a founding member of Taiwan’s Social Democratic Party. He is well along in his political science doctoral studies at Columbia University, but – as a rock ‘n roll fanatic and pop culture critic – he admits he got too caught up in the New York arts scene to complete the degree quite yet.

Still, he struck a decidedly academic tone in his seminar presentation, reaching way back to recap (with many a power-point slide) the first stirrings of democracy in both polities in the late 1980’s. With the end in sight for the old order of the Chiang Kai-shek dynasty in Taiwan and British colonial rule in Hongkong, the last factotums of each regime broached some cautious democratic reforms as a kind of poison pill defense against a hostile takeover by the PRC.

The mid-1990’s brought a moment of truth for each of the “Free China” enclaves. In 1996, Taiwan successfully held its first-ever direct presidential election in defiance of Chinese “military exercises” that included missiles shelling the island’s offshore waters. And Hongkong reverted to mainland rule in 1997 with Chinese assurances that democratic institutions would be preserved.