AND THEY'RE OFF: Federal leaders' debate trumps sports at some city bars

Green party leader Elizabeth May is expected to stick it to Harper over the $150 billion he added to the federal debt. "That is a significant expansion. Now we are at $611 billion national debt." 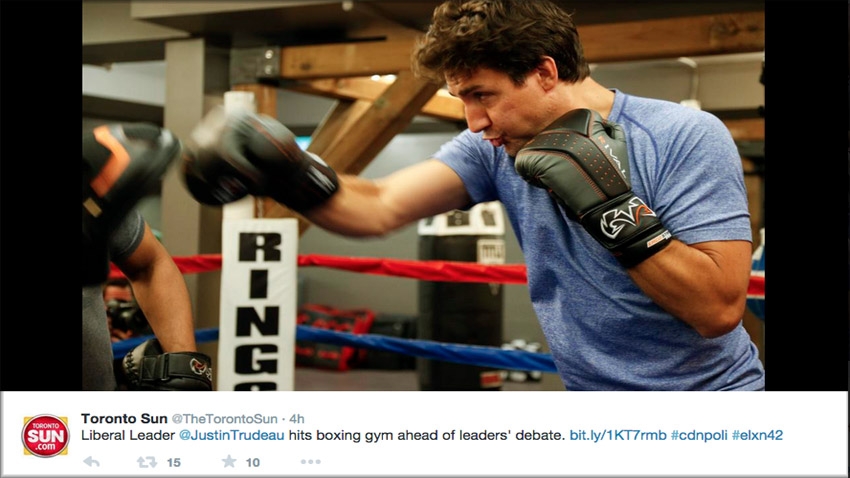 Unless Donald Trump and the first Republican debate on Fox proves to be a major distraction for armchair politicians they will be tuned into Canada's first federal leaders' debate tonight.

In Vancouver, political hounds and news junkies are making a social occasion of the federal election show-of-shows that airs here from 5-7 p.m.

Among the local watering holes that will temporarily switch their big screens from sports to the debate are London Pub in the political-hotbed neighbourhoods of Strathcona/Chinatown and The Drive (Toby's On The Drive). Meanwhile former Rabble.ca editor Derrick O'Keefe posted an open invitation to journalists, independent media workers, and members of the Canadian Freelancers Union to converge at Goldies Pizza, 605 W Pender St. at Seymour, until 7:30 p.m.

Adding to the infotainment ahead is this Canadian leaders' debate drinking game.

However, May, the lone federal leader of a West Coast riding (Saanich-Gulf Islands) in the debate, says she wants to improve the quality of the conversation. She is concerned an 11-week "nasty campaign" will turn voters off.

The Green leader, who has not been invited to participate in a debate since 2008, has been preparing privately for the event and she says she does not stage mock debates like the other leaders. 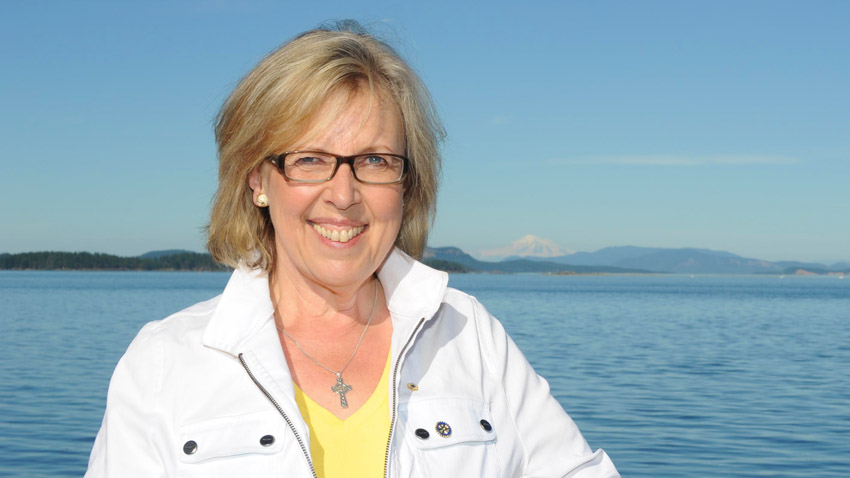 Elizabeth May says she wants to improve the quality of the conversation. (Photo via Twitter)

"It may be my experience as a lawyer," May said. "I never practised my arguments before a judge in front of a mirror before going into court... it is a personal comfort level with knowing my material and then speaking from the heart."

The economy, which has dominated the early days of the election campaign, is expected to be a major topic.

May said she was the only leader in the 2008 debate prepared to say Canada was going into a recession. Harper's economic record has been "pumped and spun by his own spin doctors" but is not very good.

"As a matter of fact, it is one of the worst of any prime minister," May said. "Stephen Harper is supposedly a fiscal Conservative, but he added $150 billion to our federal debt. That is a significant expansion. Now we are at $611 billion national debt."

May said a lot of people focus on the deficit which she said is really " a political problem" as opposed to a fiscal issue.

"Particularly, if our economy is shaky, which it is, I think it is appropriate to run a small deficit," she said.

"Now is not the time for austerity measures and that's exactly the route Stephen Harper has gone."

The debate will also address the environment, energy and foreign policy and security.

The magazine has not released details on the format of the debate, but it is said to include individual question-and-answer periods between the leaders and political editor Paul Wells, as well as free discussion and final statements.

Mulcair visited the office of NDP candidate Jennifer Hollett in the Toronto riding of University-Rosedale, saying he's ready for the showdown.

"I am not afraid to stand up to Stephen Harper," Mulcair said. "This is my first debate, I am looking forward to it."

Party insiders say Mulcair, who was praised for his prosecutorial approach in question period during the throes of the Senate scandal, will not try to emulate that style in the debate.

Trudeau allowed to the media to snap his picture as he hit a boxing gym in Toronto this morning.

The Liberal, who famously defeated former Conservative senator Patrick Brazeau in a charity boxing match in 2012, is hoping to showcase his political footwork in the debate.

Conservatives have tried to paint Trudeau as a lightweight and spokesperson Kory Teneycke went as far as to say he will exceed expectations "if he comes on stage with his pants on."

"We know that the prime minister will be the focal point of most of the attacks and questions coming from the other party leaders," Teneycke said Tuesday.

— with files from Canadian Press