North Vancouver resident Paul Clark doesn't only tackle social isolation through his work with the Metro Vancouver Alliance; he's made it his round-the-clock personal mission. 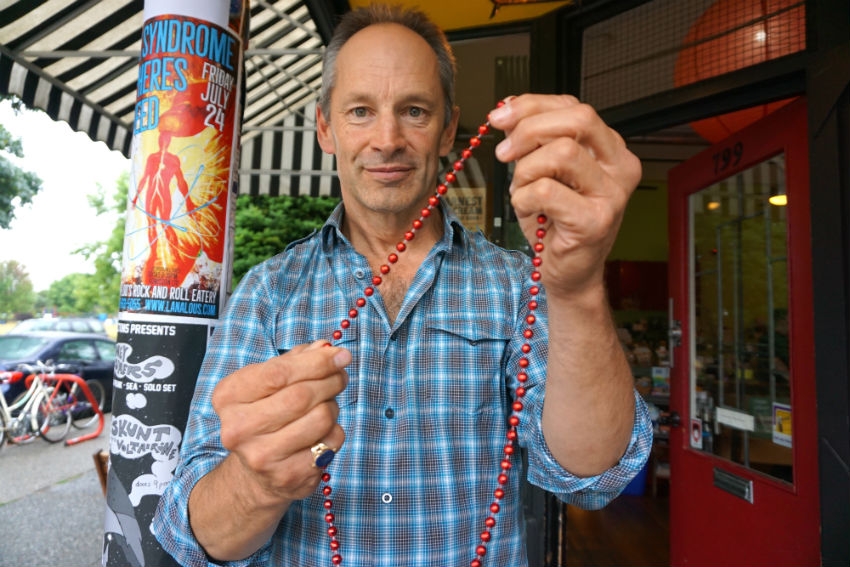 Metro Vancouver Alliance social inclusion co-chair Paul Clark says each bead on his necklace represents a person in his life. Wearing it reminds him to ask one person a day if they are in need of a helping hand. Photo by Elizabeth McSheffrey.

Vancouver is socially isolating for some.

According to recent research by the Vancouver Foundation, one in four Metro Vancouver residents is “alone more often than they would like to be,” and one third said it’s difficult to make new friends.

The survey found that most of us know the names of at least two neighbours, but community connections typically stop there.

“Most cities are fine but Vancouver stands out,” says Paul Clark, co-chair of the social inclusion committee of Metro Vancouver Alliance (MVA). “There’s something, and I can’t quite put my finger on it, that every other city seems to have — a lightening rod that brings people together.”

We meet in a crowded Strathcona coffee shop where a row of solo customers squeezes next to each other at the bar to avoid sitting face-to-face at a communal table. Vancouver is a “closed” city, says Clark, despite how close everyone is geographically.

“Because we don’t have that common bond, we don’t even have a way to enter into a conversation with a stranger,” he says, looking at the empty seats.

Clark has made it his mission to bring Vancouver residents closer together not only through his work with MVA, but in his spare time as well.

I ask him about the bright red beads around his neck and he tells me they're one of his social inclusion inspirations.

Feelings inside not expressed

“This necklace has 100 beads on it and represents 100 people in your life,” he says, holding it up. “Since one in four are socially-isolated, 25 in your circle are socially-isolated. Ask one person a day how they are and if they say they’re fine, ask if they really are.”

He doesn't know where the acronym came from, but says 'fine' stands for 'feelings inside not expressed.' Clark used to have thousands of red necklaces sitting at home, but has given most of them away to people who have committed to being socially-inclusive.

It's a simple way to get people talking, one of many the North Vancouver resident has up his sleeves.

Last year, Clark started hosting open pub nights in his Edgemont Village home to encourage new friendships and build solidarity in his neighbourhood. It's a separate initiative from his work with MVA, but has the same goal of creating lasting connections.

Why wait for the earthquake?

Clark has hosted 25 pub nights so far, some of which have attracted more than 50 people. He typically knows a third of the gatherers, and the rest are strangers who have seen the welcome sign on his lawn, heard about it from a friend, or from Clark himself.

"I had a guy who was in the neighbourhood for 50 years walk into the event one night with a dog tied to a string," he remembers. "He told me he had not been out socially in 25 years, and the next day he brought by a huge bottle of homemade wine with a white index card that said, ‘Thank you very much.’”

Clark has hosted a genuine cross-section of society, including film crews, families, business owners, retirees, and more. He believes the success of his pub nights points to one conclusion: People in Vancouver want to belong, but lack opportunity for a variety of personal, professional, or financial reasons.

"A lot of people are hurting out there and they just need to have someone listen,” he says, beads now back around is neck. “It’s a necessary thing to do. We’re a crisis — why wait for the earthquake?”

Giving power back to neighbourhoods

Social inclusion is vital to individual and community wellbeing, and according to the Vancouver Foundation, a lack of inclusion is closely associated with depression, substance abuse, obesity and other chronic physical and mental conditions.

According to MVA, Vancouver has slipped into a state of social isolation over the years, a matter complicated by poverty, housing, and transportation.

Since 2014, MVA's social inclusion committee, led by Clark, has been working on simple measures to reduce isolation based on the dynamics of individual communities.

“There are thousands of little drops that fill a bucket, and it’s up to us to enable thousands of creative people to unleash them,” he explains. “We have to get rid of the barriers for them, allow them to magnify and upscale their initiatives.”

In the fall, MVA will start a pilot program to simplify the special event permit application process, making it easier for neighbourhoods to host barbecues, block parties, concerts and other activities.

The committee is also creating “geographic clusters” of its member groups to help them collaborate in tackling local challenges and support one another’s community initiatives.
The goal is to make Vancouver "as beautiful on the inside as it is on the outside," says Clark, who is committed to the process through and through.

“This aligns with everything I’ve done in my life," he says smiling. "Without an excuse to reach out to someone, we don’t, and we go further and further into our shells... social inclusion (initiatives) can at least make a dent in that."